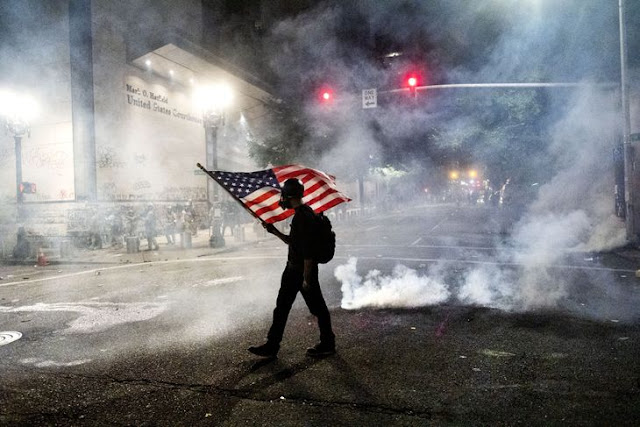 A Portland resident who is black and lives downtown a block away from the Justice Center thought the nightly protests had been completely peaceful. Then he attended one and had a rude awakening.

Gabe Johnson, a 48-year-old black man who served in the Marines, now says that Portland police should use any means necessary, including force, to sweep the riots off the streets and end the nightly violence.

In an interview with PJ Media, Johnson said he considers himself a patriotic American, and that the United States flag should be a symbol of unity for all Americans. He laments how some have turned it into a symbol of racism and division, especially in Portland.

Last Saturday night and into Sunday morning, Johnson says he was in bed trying to sleep, but the noise kept him awake. He counted 82 explosions disturbing his sleep. Then, with his air conditioning running and bringing in air from outside through the vents, he was suddenly immersed in tear gas from the street below. That’s when he decided to take action.

“You know, so I literally stood up and just yelled,” Johnson said in the interview. “‘Oh my God,’ I actually yelled. ‘Oh my effing God.’ It was just like somebody has to do something. I don’t know what that something is. I didn’t at that time, but I knew something had to be done and I figured I would just sleep on it.”

The next day he went down around noon to the ongoing protests in front of the Justice Center to hang a couple of American flags on the fence and start a dialogue with some of the protesters.

“When I woke up in the morning,” Johnson said, “it was clear as day, almost like it was just planted in my head. This is what you’re going to do. Hopefully we can start a conversation. Here we are now we are starting this conversation. But I can tell you the experience was eye-opening. I did not believe what I used to call the rhetoric about antifa. I was thinking that maybe they’re just, you know, some punk kids or whatever it was, some righteous anger in there. I quickly found out that that’s not the case.”

Having worked for the State Department after an eight-year career in the Marines, Johnson has done a lot of duty overseas. He says the antifa rioters in Portland use the same tactics he’s witnessed from terrorists. “They’re utilizing the same tactics that any other terrorist organization would,” Johnson said. “They’ve got spotters with cameras that will follow you around, and they’ve got their thugs. Those are the guys with the baseball bats. They have people that will intimidate you in Black Lives Matter attire.”

Johnson says his goal was to try to convince Portland protesters to stop tearing America apart, and to start bringing it together. “What is more patriotic than our flag?” he said. “What will really just be in your face, America? This is America, right? I wanted to have a conversation so that they would understand that what they’re doing is tearing the country apart and not bringing it back together, and hopefully by telling this community that we live in it’s time to start a conversation and it’s time to unite America. Because the Black Lives Matter movement has turned into something else. Antifa has attached itself to this movement now and it’s taken it over.”

It’s important to note that Johnson is no fan of Donald Trump, and is not a conservative. He considers himself a moderate. He also considers himself a patriot who is tired of watching America come apart at the seams. When he went to the protest, he did not encounter other patriots, but he did encounter protesters who aren’t from Portland.

“It’s beyond me how they can sit there and say that they’re not causing damage or rioting,” he said. “It’s a riot, and it’s real, and when you are on the front line and you’re looking back into that crowd, it is an angry mob that is built on doing as much destruction as possible.”

“Unfortunately, 90% of the people don’t look like me, but 99% of the people that I talk to don’t even live in Portland,” he added. “If you are down here at one of these movements or one of these protests, one of the things you’re going to notice is there’s a lot of out-of-state license plates. People are very brazen about the fact that no, they’re not from here.”

When he went down to the protest with his flags, Johnson expected to talk to people. He didn’t expect to be assaulted. Several people stole his flags and stomped them on the ground. One older black man, around 65 years old, grabbed one of the flags and handed it back to Johnson. A protester promptly punched the man in the face and ran off.

Reminder: This all took place in broad daylight, not at a late-night riot.

Johnson says protesters called him a coon, Uncle Tom, and the n-word—”with the -ER, not -a.” He has done several interviews this week because he wants the world to know that when leaders say that the federal law enforcement officers have caused the riots, and that the protests are largely peaceful, that’s a lie.

Jeff Reynolds is the author of the book, “Behind the Curtain: Inside the Network of Progressive Billionaires and Their Campaign to Undermine Democracy,” available at www.WhoOwnsTheDems.com. Jeff hosts a podcast at anchor.fm/BehindTheCurtain. You can follow him on Twitter @ChargerJeff, and on Parler at @RealJeffReynolds.