The Decline of the Civil-Rights Establishment

Black leaders weren't so much outraged at injustice as they were by the disregard of their own authority. 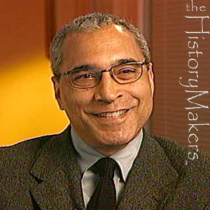