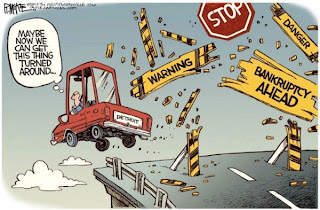 Saving Detroit From Itself 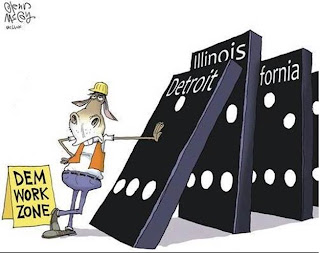 A federal bailout would only reinforce the city's corrupt political culture.
The AFL-CIO and its friends are mourning Detroit as a victim of capitalism, claiming the government has a moral obligation to rescue the bankrupt city. This is a nice political fable, but the hard truth is that Motown is a victim of its own political vices and a bailout would merely forestall the necessary rehab.
One myth is that Detroit is a victim of the U.S. auto industry. But the city's breakdown preceded the decline of GM, GM -1.11% Ford and Chrysler and has continued despite their resurgence. American car makers have been doing better for three years, but Detroit is getting little benefit because the industry long ago left the city. Michigan's jobless rate has fallen to 8.7% from 14.2% in August 2009, and the rate is now 6.2% in suburban Dearborn (Ford headquarters), but still 16.3% in Detroit.
Detroit's decline really began with the middle-class migration to the suburbs in the 1950s, which accelerated after the 1967 race riot and election of labor organizer Coleman Young as mayor in 1973. During his 20-year reign, Mr. Coleman ignored crime, inflamed racial tensions and built a patronage machine. (See Steve Malanga's history nearby.)
Local politicians bought union support with generous labor agreements. Pensions were sweetened retroactively. In good investment years, retirement funds issued bonus checks. Until two years ago public-safety officers didn't have to pay a penny to their pensions and could retire at 55 with roughly 85% of their salary, a 2.25% annual cost-of-living increase and nearly free health benefits.
While the average pension is $30,000 for public safety and $19,000 for other municipal workers, these figures are skewed by workers who retire early with reduced benefits or on disability. A quarter of retired officers receive disability pensions, which pay two-thirds of salary. Fifty-four retirees are under the age of 20 and earn pensions that average $23,300, according to a 2011 actuarial report.
The actuaries mention as a footnote that the retirement tables "may include records with defective birth dates." Detroit's pension funds, like most of its municipal agencies, keep sloppy records. About 70% of the city's financial journal entries are booked manually.
Misrule has resulted in the nation's highest violent crime rate, worst schools, blight and corruption. A former mayor, city treasurer and several pension-fund trustees were recently indicted for corruption. The general counsel for the pension funds this year was charged with securing kickbacks for trustees, including a $5,000 check presented as a birthday gift at a soiree, in return for a nice raise.
While local politicians and union chiefs got richer, the city became poorer. Businesses and middle-class families have fled, sapping the city of revenues and economic vitality. About a third of residents live below the poverty line.
To make up for lower property and income-tax collections, the state has increased its revenue-sharing with Detroit and allowed it to raise tax rates higher than any other city in Michigan. Detroit collects 50% more tax revenue per capita than Dearborn and receives four times as much money from the state.
In one sense, Detroit has already received a rolling bailout that it squandered. Last year the city received $228 million in federal grants and $137 million from the state. It has also borrowed $1.6 billion to finance pensions over the last decade. Under emergency manager Kevyn Orr's restructuring plan, the capital market creditors who bailed out the unions would be repaid pennies on the dollar. That should teach investors a lesson about enabling deadbeat cities.
Mr. Orr has also proposed slashing unfunded retirement liabilities by 90% and dropping retirees onto Medicare and the ObamaCare exchanges—thus kicking $5.7 billion in liabilities to national taxpayers. He also wants to shift workers to defined-contribution plans, which is what state workers receive.
Unions protest that it's unfair to put pensions under the knife in bankruptcy since pay and other benefits have already been nipped at the bargaining table. But these concessions were cosmetic: a 10% wage cut, reduction in vacation accruals, a pension cost-of-living freeze and elimination of retiree dental care and future sick pay.
In any event, retirees aren't about to be thrown out on the crime-ridden streets. The city's pension funds are between 60% to 85% funded depending on the actuarial assumptions, and Mr. Orr's proposed haircut would affect only the unfunded portion, meaning most accrued benefits will be protected.
For decades the city has turned to taxpayers and capital markets to finance worker pensions, but both are tapped out. So finally workers and retirees will have to pay. There's no such thing as a free pension.
***
Unions say it's not fair for the city to break promises to workers, though it long ago abrogated its social contract with local taxpayers to protect their safety and provide basic public services. What would really be unfair is to make taxpayers in cities like San Jose, California, and Providence, Rhode Island, which have scaled back current worker pensions to avert bankruptcy, pay for Detroit's recklessness.
As history shows, sending more cash to Detroit won't fix its breakdown in self-government. Another bailout would merely support its toxic political culture of neglect and corruption.
http://online.wsj.com/article/SB10001424127887324783204578624161224137252.html?mod=WSJ_Opinion_LEADTop
Posted by Frances Rice at 5:45 PM