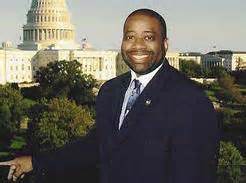 No D.C. Bargain for Wal-Mart
By Raynard Jackson
Over the past few weeks, the D.C. City Council has been in the news quite a bit, though but for all the wrong reasons.  They recently passed a law that would prevent thousands, yes you heard me right, thousands of jobs from being created within their city.
Now mind you that D.C. is a majority Black city, with a Black mayor and near Black majority on the council, and one of the highest unemployment rates in the country (especially among Blacks).  The national unemployment rate for June was 7.6 percent, but in DC the rate was 8.5 percent (almost a full point higher).
At issue is the "Large Retailer Accountability Act," introduced by council Chairman Phil Mendelson (D).  The bill would require large retailers, defined as businesses operating an indoor store of at least 75,000 square feet and whose corporate parent has sales of at least $ 1 billion—to pay wages no lower than $12.50 per hour plus benefits.  They call this a "living wage" and it would be indexed to the local consumer price index every year. (Note:  The Federal minimum wage is $ 7.25/hour but D.C. has tacked on an additional $ 1, so in D.C. the minimum wage is $ 8.25/hour.  This is almost a 40 percent premium that the council wants to subject job creators to.)
This bill targets the city's largest retailers, including Wal-Mart, Costco and Home Depot.
The vote on this law was 8-5. For the bill to become law, it has to be signed by D.C. Mayor Vincent Gray, and then it must go through a 30-day Congressional review period.
Fortunately, the mayor vetoed the bill.  The council needs 9 of the 13 councilmen votes to override the mayor's veto.
So, let me make sure I understand what's going on here.  D.C. desperately needs jobs, Wal-Mart is willing to obey all wage laws to bring D.C. thousands of jobs with benefits, and then D.C. tells them that they don't like the manner in which they choose to create those jobs that its citizens need.
Business can only thrive in an environment of certainty.
Wal-Mart negotiated in good faith with the leaders of D.C. and then committed to build several stores based on those terms. Councilman Vincent Orange, stated, "Wal-Mart's balance sheet can surely absorb the difference [between the legal wages Wal-Mart agreed to pay vs. the new "livable wage" the councils wants]."
An unnamed politician told CBS news, "If Wal-Mart moves on, another so-called 'big box' retailer will fill the void."
This has little to do with race and more to do with ideology.  Liberals hate corporate America and despise those who want to make money.  What's interesting to note is that the most vocal proponents of this bill have never created a job nor have ever had to meet a payroll.
They find it very easy to put demands on how others invest their money because they have never thought about putting their money at risk in order to make money.
The only reason a person opens a business is to make a profit.  Period.  Not to pay a "livable wage," but to make a profit.  You not being able to raise your family on the wages your employer is paying is not their issue.  Before one starts a family, one must be able to financially afford a family.
Creating and raising a family is a personal matter between the parties involved and employers should not have to bear the burden of the private choices one makes.  This is a central tenant of liberalism—you make a private choice; and if things don't work out, they will find a way to get you relief from some other source that had no involvement with your original choice.
D.C. is the personification of a liberal approach to addressing the high unemployment rate within the minority community.  The very people they are attempting to help are the ones who are hurt the most by their policies.  But in liberalism, it's the thought that counts.
Raynard Jackson is president & CEO of Raynard Jackson & Associates, LLC., a Washington, D.C.-based public relations/government affairs firm.
http://www.blackpressusa.com/no-d-c-bargain-for-wal-mart/
________________________ 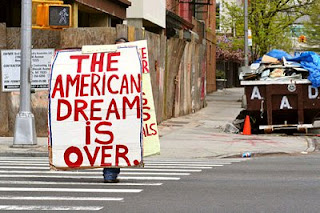 Detroit's death by democracy
By George F. Will
In 1860, an uneasy Charles Darwin confided in a letter to a friend: "I had no intention to write atheistically" but "I cannot persuade myself that a beneficent and omnipotent God would have designedly created the Ichneumonidae with the express intention of their feeding within the living bodies of caterpillars." What appalled him had fascinated entomologist William Kirby (1759-1850): The ichneumon fly inserts an egg in a caterpillar, and the larva hatched from the egg, he said, "gnaws the inside of the caterpillar, and though at last it has devoured almost every part of it except the skin and intestines, carefully all this time avoids injuring the vital organs, as if aware that its own existence depends on that of the insect on which it preys!"
Government employees' unions living parasitically on Detroit have been less aware than ichneumon larvae. About them, and their collaborators in the political class, the question is: What. Were. They. Thinking? Well, how did Bernie Madoff or the Enron executives convince themselves their houses of cards would never collapse?
Here, where cattle could graze in vast swaths of this depopulated city, democracy ratified a double delusion: Magic would rescue the city (consult the Bible, the bit about the multiplication of the loaves and fishes), or Washington would deem Detroit, as it recently did some banks and two of the three Detroit-based automobile companies, "too big to fail." But Detroit failed long ago. And not even Washington, whose recklessness is almost limitless, is oblivious to the minefield of moral hazard it would stride into if it rescued this city and, then inevitably, others that are buckling beneath the weight of their cumulative follies. It is axiomatic: When there is no penalty for failure, failures proliferate.
This bedraggled city's decay poses no theological conundrum of the sort that troubled Darwin, but it does pose worrisome questions about the viability of democracy in jurisdictions where big government and its unionized employees collaborate in pillaging taxpayers. Self-government has failed in what once was America's fourth-­largest city and now is smaller than Charlotte.
Detroit, which boomed during World War II when industrial America was "the arsenal of democracy," died of democracy. Today, among the exculpatory alibis invoked to deflect blame from the political class and the docile voters who empowered it, is the myth that Detroit is simply a victim of "de-industrialization." In 1950, however, Detroit and Chicago were comparable — except Detroit was probably wealthier, as measured by per capita income. Chicago, too, lost manufacturing jobs, to the American South, to south of the border, to South Korea and elsewhere. But Chicago discerned the future and diversified. It is grimly ironic that Chicago's iconic street is Michigan Avenue.
Detroit's population, which is 62 percent smaller than in 1950, has contracted less than the United Auto Workers membership, which once was 1.5 million and now is around 390,000. Auto industry executives, who often were invertebrate mediocrities, continually bought labor peace by mortgaging their companies' futures in surrenders to union demands. Then city officials gave their employees — who have 47 unions, including one for crossing guards — pay scales comparable to those of autoworkers. Thus did private-sector decadence drive public-sector dysfunction — government negotiating with government-employees' unions that are government organized as an interest group to lobby itself to do what it wants to do: Grow.
Steven Rattner, who administered the bailout of part of the Detroit-based portion of America's automobile industry, says, "Apart from voting in elections, the 700,000 remaining residents of the Motor City are no more responsible for Detroit's problems than were the victims of Hurricane Sandy for theirs." Congress, he says, should bail out Detroit because "America is just as much about aiding those less fortunate as it is about personal responsibility."
There you have today's liberalism: Human agency, hence responsibility, is denied. Apart from the pesky matter of "voting in elections" — apart from decades of voting to empower incompetents, scoundrels and criminals, and to mandate unionized rapacity — no one is responsible for anything. Popular sovereignty is a chimera because impersonal forces akin to hurricanes are sovereign.
The restoration of America's vitality depends on, among many other things, avoiding the bottomless sinkhole that would be created by the federal government rescuing one-party cities, and one-party states such as Illinois, from the consequences of unchecked power. The consequences of such power — incompetence, magical thinking, cynicism and sometimes criminality — are written in Detroit's ruins.
http://www.washingtonpost.com/opinions/george-f-will-detroits-death-by-democracy/2013/07/31/74a109c2-f94a-11e2-afc1-c850c6ee5af8_story.html
________________________ 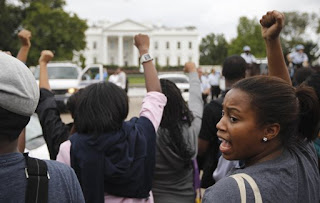 America is driving down the same road that bankrupted
Detroit

It is all but impossible to conceive of a more vivid example of the devastation wrought when a coalition of liberal Democrats and Big Labor bosses holds unchallenged sway for five decades over a beautiful, prosperous and growing American city like Detroit circa 1960. In that first year of the 1960s, Detroit was America's fourth largest city and its 1.8 million residents enjoyed the highest per capita income in the country. Chrysler, Ford and General Motors dominated the automotive market, profits flooded their coffers and hundreds of thousands of workers enjoyed high pay and generous benefits.
And today? In a bracing five-part series published July 22-26, the Washington Examiner's Sean Higgins described the city's fall in these terms: "Detroit is now the most dangerous big city in America, according to FBI statistics, with a crime rate five times the national average. The city's economy crumbled, too. Unemployment was 7.2 percent in 1970 but soared to 19.7 percent by 1990. Today it is a staggering 18.6 percent, far above the national rate of 7.6 percent. The city is nearly $20 billion in debt. Michigan Gov. Rick Snyder appointed an emergency manager in March. It may be decades before Detroit digs itself out of the financial pit into which it has fallen."
Things are so bad in Detroit, according to National Review's Mark Steyn, that "40 percent of its streetlamps don't work; 210 of its 317 public parks have been permanently closed; it takes an hour for police to respond to a 9-1-1 call; only a third of its ambulances are drivable; one-third of the city has been abandoned; the local realtor offers houses on sale for a buck and still finds no takers." This is Detroit, the city once described as "the arsenal of democracy" because its factories so quickly switched from making Fords to Flying Fortresses. The city that put the world on wheels and drove the American economy to previously unimagined prosperity.
The last time Detroit elected a Republican mayor was 1957. Only one Republican has made it to the city council since 1970. More than anywhere else in America (with the possible exception of Chicago) Detroit has been a one-party union city. Democratic politicians backed by the United Auto Workers and public employees' unions have ruled virtually as they pleased. Along the way, many of the politicians ended up in jail on corruption charges and the bureaucrats made out with sweetheart deals on pensions and health benefits. Those sweetheart deals now account for most of the $20 billion in debt that put the city into bankruptcy.
There are too many disturbing parallels between Detroit and America. The national debt of $17 trillion gets a lot of attention, but the reality is the government's actual debt, counting the unfunded liabilities of Social Security, Medicare and federal employee and retiree benefits, exceeds $86 trillion, according to former congressmen Chris Cox and Bill Archer. As they say, things that can't go on forever, won't.
http://washingtonexaminer.com/america-is-driving-down-the-same-road-that-bankrupted-detroit/article/2533550
Posted by Frances Rice at 4:53 PM