Obama Turns Back on Blacks, Fails Test of Loyalty

Winston Churchill once said: “To every man there comes a time in his life when he is figuratively tapped on the shoulder and offered the chance to do a great and mighty thing; unique to him and fitted to his talents. What a tragedy if that moment finds him unprepared or unqualified for the moment that could be his finest hour.”

Barack Obama was tapped on the shoulder and given the chance to be the first black president of these United States. When President Obama assumed office 6 years ago, he faced a collapsing economy, a world with seemingly endless conflicts, a citizenry very unsure of their future. After years of war and chaos, America wanted someone who would inspire the nation to return to greatness, someone who would reassure the nation that everything would be alright. 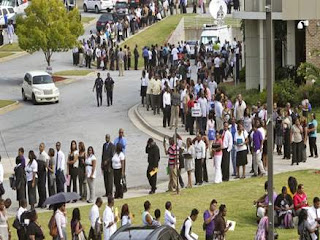 Mr. Obama’s campaign theme was “Hope and Change.” Now, after six years, people, especially blacks, are saying they hope he changes. Mr. Obama is the first president in the history of the U.S. to deliberately ignore his largest voting bloc — the black community.

If Mr. Obama was a corporation, his largest shareholders would be: blacks, whites, Latinos and Asians. In capital markets, dividend payouts are distributed according to percentage of ownership, from the highest to the lowest. On this principle, blacks should be the largest recipient of Mr. Obama’s largesse. But in typical Democratic fashion, blacks don’t even get crumbs from the table. The biggest beneficiaries of Mr. Obama’s presidency are: homosexuals (an estimated 2 percent of the population), illegals and whites. I challenge my readers to name one thing Mr. Obama has done “specifically” to benefit the black community — the largest shareholder in “Obama Inc.” If black voters were shareholders in “Obama Inc.,” they could have gone to court and sued for fraud and breach of contract — and prevailed.

The black community had every expectation that Mr. Obama would provide “targeted” remedies to address seemingly intractably high unemployment within our community. Instead, the black unemployment rate remains at double digit levels (11.6 percent ) — and not a word from this president.

Blacks had every right to expect Mr. Obama to be supportive of historically black colleges and universities (HBCU). Instead, the HBCU community and its students have been devastated under this president; so much so that several black educational groups are in the process of filing a lawsuit against the Obama administration.

A recent Associated Press-GfK poll indicated that even Democrats have lost faith in Mr. Obama and his ability to govern. According to this poll, only 27 percent of Democrats are confident the government can keep them safe from terrorist attacks.

Mr. Obama used to be able to make Americans feel good simply by giving one of his patented rousing speeches; but by now, most Americans have tuned him out because they don’t believe anything he or his government has to say.

Mr. Obama said Ebola would never reach our shores, now it’s here. He said the border was secure, but you have illegals streaming across the border with all kinds of diseases that they refuse to disclose to the American people. He said the Benghazi attack was a spontaneous, popular reaction to an anti-Muslim video, but of course everyone now knows it was a terrorist attack. He said you could keep your own doctor, yet he admitted that he willfully lied.

The handwriting is on the wall, Mr. Obama’s presidency is over! As it is written in the Bible in the Book of Daniel 5:25-27: “Mene, Mene, Tekel, Upharsin. This is the interpretation of the thing: Mene; God hath numbered thy kingdom and finished it. Tekel; Thou art weighed in the balances and art found wanting.”

In what could have been his and America’s finest hour, Mr. Obama has been found “unprepared and unqualified for the moment.”

Raynard Jackson is a Republican political consultant, syndicated columnist and author of the book “Writing Wrongs: My Political Journey in Black and Write.” Web: www.raynardjackson.com