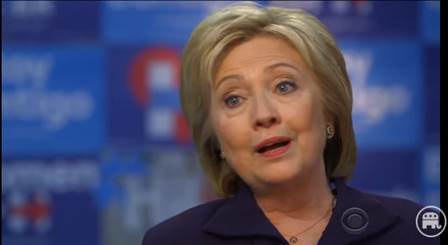 Hillary Clinton is one step closer to imprisonment. The presumptive Democratic Party's presidential nominee is being pushed toward jail at the point of a spear by the Romanian hacker, Marcel Lehel Lazar, known as “Guccifer.” Clinton claims her unsecure email server was never breached, but that assertion was exposed a bald-faced lie by Lazar who spoke exclusively with Fox News as shown in the below article. Lazar said he easily – and repeatedly – breached Clinton’s personal email server in early 2013.


federal judge further opened the door to forcing Hillary Clinton to be deposed over her secret email server.


The Hill reports: A federal judge on Wednesday opened the door to interviewing Democratic presidential front-runner Hillary Clinton as part of a review into her use of a private email server while secretary of State.


Judge Emmet Sullivan of the U.S. District Court for the District of Columbia laid out the ground rules for interviewing multiple State Department officials about the emails, with an eye toward finishing the depositions in the weeks before the party nominating conventions.


Clinton herself may be forced to answer questions under oath, Sullivan said, though she is not yet being forced to take that step.


A former federal prosecutor said Clinton could be the first president in history to be prohibited from looking at classified material.


The Washington Examiner reports: Hillary Clinton could be the first president to be prohibited from looking at classified information if she is ultimately placed on probation for alleged wrongdoing as secretary of state, a former U.S. attorney speculated.


"I think it would be kind of uncharted territory," Matthew Whitaker, a former prosecutor under the George W. Bush administration's Justice Department, told the Washington Examiner. "Some of these statutes that could potentially [have been] violated certainly could bar somebody from future security clearances" … In the event Clinton is charged with a crime, there is a strong likelihood that federal prosecutors could offer her a plea deal instead of forcing a trial.


That deal would include a probationary period, and could prevent Clinton from looking at classified information until the end of that period.

Romanian hacker Guccifer: I breached Clinton server, 'it was easy'


"For me, it was easy ... easy for me, for everybody," Marcel Lehel Lazar, who goes by the moniker "Guccifer," told Fox News from a Virginia jail where he is being held.


Guccifer’s potential role in the Clinton email investigation was first reported by Fox News last month. The hacker subsequently claimed he was able to access the server – and provided extensive details about how he did it and what he found – over the course of a half-hour jailhouse interview and a series of recorded phone calls with Fox News. Fox News could not independently confirm Lazar’s claims.


The 44-year-old Lazar said he first compromised Clinton confidant Sidney Blumenthal's AOL account, in March 2013, and used that as a stepping stone to the Clinton server. He said he accessed Clinton’s server “like twice,” though he described the contents as “not interest[ing]” to him at the time.


“I was not paying attention. For me, it was not like the Hillary Clinton server, it was like an email server she and others were using with political voting stuff," Guccifer said.


The hacker spoke freely with Fox News from the detention center in Alexandria, Va., where he’s been held since his extradition to the U.S. on federal charges relating to other alleged cyber-crimes. Wearing a green jumpsuit, Lazar was relaxed and polite in the monitored secure visitor center, separated by thick security glass.


In describing the process, Lazar said he did extensive research on the web and then guessed Blumenthal’s security question. Once inside Blumenthal's account, Lazar said he saw dozens of messages from the Clinton email address.


Asked if he was curious about the address, Lazar merely smiled. Asked if he used the same security question approach to access the Clinton emails, he said no – then described how he allegedly got inside.


“For example, when Sidney Blumenthal got an email, I checked the email pattern from Hillary Clinton, from Colin Powell from anyone else to find out the originating IP. … When they send a letter, the email header is the originating IP usually,” Lazar explained.


He said, “then I scanned with an IP scanner."


Lazar  emphasized that he used readily available web programs to see if the server was “alive” and which ports were open. Lazar identified programs like netscan, Netmap, Wireshark and Angry IP, though it was not possible to confirm independently which, if any, he used.


In the process of mining data from the Blumenthal account, Lazar said he came across evidence that others were on the Clinton server.


With no formal computer training, he did most of his hacking from a small Romanian village.


Lazar said he chose to use "proxy servers in Russia," describing them as the best, providing anonymity.


Cyber experts who spoke with Fox News said the process Lazar described is plausible. The federal indictment Lazar faces in the U.S. for cyber-crimes specifically alleges he used "a proxy server located in Russia" for the Blumenthal compromise.


Each Internet Protocol (IP) address has a unique numeric code, like a phone number or home address.  The Democratic presidential front-runner’s home-brew private server was reportedly installed in her home in Chappaqua, N.Y., and used for all U.S. government business during her term as secretary of state.


Former State Department IT staffer Bryan Pagliano, who installed and maintained the server, has been granted immunity by the Department of Justice and is cooperating with the FBI in its ongoing criminal investigation into Clinton’s use of the private server. An intelligence source told Fox News last month that Lazar also could help the FBI make the case that Clinton’s email server may have been compromised by a third party.


Asked what he would say to those skeptical of his claims, Lazar cited “the evidence you can find in the Guccifer archives as far as I can remember."


Writing under his alias Guccifer, Lazar released to media outlets in March 2013 multiple exchanges between Blumenthal and Clinton. They were first reported by the Smoking Gun.


It was through the Blumenthal compromise that the Clintonemail.com accounts were first publicly revealed.


As recently as this week, Clinton said neither she nor her aides had been contacted by the FBI about the criminal investigation. Asked whether the server had been compromised by foreign hackers, she told MSNBC on Tuesday, “No, not at all.”


Recently extradited, Lazar faces trial Sept. 12 in the Eastern District of Virginia. He has pleaded not guilty to a nine-count federal indictment for his alleged hacking crimes in the U.S. Victims are not named in the indictment but reportedly include Colin Powell, a member of the Bush family and others including Blumenthal.


Lazar spoke extensively about Blumenthal’s account, noting his emails were “interesting” and had information about “the Middle East and what they were doing there.”


After first writing to the accused hacker on April 19, Fox News accepted two collect calls from him, over a seven-day period, before meeting with him in person at the jail. During these early phone calls, Lazar was more guarded.


After the detention center meeting, Fox News conducted additional interviews by phone and, with Lazar's permission, recorded them for broadcast.


While Lazar's claims cannot be independently verified, three computer security specialists, including two former senior intelligence officials, said the process described is plausible and the Clinton server, now in FBI custody, may have an electronic record that would confirm or disprove Guccifer’s claims.


"This sounds like the classic attack of the late 1990s. A smart individual who knows the tools and the technology and is looking for glaring weaknesses in Internet-connected devices," Bob Gourley, a former chief technology officer (CTO) for the Defense Intelligence Agency, said.


Gourley, who has worked in cybersecurity for more than two decades, said the programs cited to access the server can be dual purpose. "These programs are used by security professionals to make sure systems are configured appropriately. Hackers will look and see what the gaps are, and focus their energies on penetrating a system," he said.


Cybersecurity expert Morgan Wright observed, "The Blumenthal account gave [Lazar] a road map to get to the Clinton server. ... You get a foothold in one system. You get intelligence from that system, and then you start to move."


In March, the New York Times reported the Clinton server security logs showed no evidence of a breach.  On whether the Clinton security logs would show a compromise, Wright made the comparison to a bank heist: "Let’s say only one camera was on in the bank. If you don‘t have them all on, or the right one in the right locations, you won’t see what you are looking for.”


Gourley said the logs may not tell the whole story and the hard drives, three years after the fact, may not have a lot of related data left. He also warned: "Unfortunately, in this community, a lot people make up stories and it's hard to tell what's really true until you get into the forensics information and get hard facts.”


For Lazar, a plea agreement where he cooperates in exchange for a reduced sentence would be advantageous. He told Fox News he has nothing to hide and wants to cooperate with the U.S. government, adding that he has hidden two gigabytes of data that is “too hot” and “it is a matter of national security.”


In early April, at the time of Lazar’s extradition from a Romanian prison where he already was serving a seven-year sentence for cyber-crimes, a former senior FBI official said the timing was striking.


“Because of the proximity to Sidney Blumenthal and the activity involving Hillary’s emails, [the timing] seems to be something beyond curious,” said Ron Hosko, former assistant director of the FBI’s Criminal Investigative Division from 2012-2014.


There was no immediate response from the FBI or Clinton campaign.