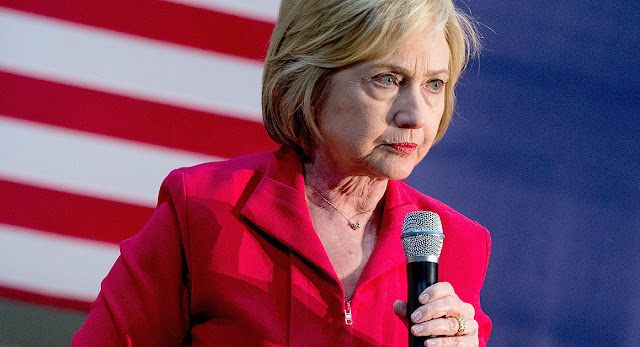 By Andrew C. McCarthy
Politico reports that the State Department inspector general has concluded that Hillary Clinton violated State’s recordkeeping protocols. The finding is contained in a much anticipated report provided to Congress today.
Significantly, the report also reveals that Clinton and her top aides at State — Cheryl Mills, Jake Sullivan, Huma Abedin, and possibly others — refused to cooperate with the IG’s investigation despite the IG’s requests that they submit to interviews.
The report is devastating, although it transparently strains to soften the blow. For example, it concludes that State’s “longstanding systemic weaknesses” in recordkeeping “go well beyond the tenure of any one Secretary of State.” Yet, it cannot avoid finding that Clinton’s misconduct is singular in that she, unlike her predecessors, systematically used private e-mail for the purpose of evading recordkeeping requirements.
“Secretary Clinton should have preserved any Federal records she created and received on her personal account by printing and filing those records with the related files in the Office of the Secretary,” the report states. By failing to do so, and compounding that dereliction with a failure to “surrender[] all emails dealing with Department business before leaving government service,” Clinton, the IG finds, “did not comply with the Department’s policies.”
This articulation of Mrs. Clinton’s offense is also sugar-coated. By saying Clinton violated “policies,” the IG avoids concluding that she violated the law. But the IG adds enough that we can connect the dots ourselves. The “policies,” he elaborates, “were implemented in accordance with the Federal Records Act.” To violate the policies — as Shannen Coffin has explained here at National Review — is to violate the law.
The IG report elucidates that Clinton and her aides knew this to be the case.
Politico notes: The report states that its findings are based on interviews with current Secretary of State John Kerry and his predecessors — Madeleine Albright, Colin Powell and Condoleezza Rice, but that Clinton and her deputies declined the IG’s requests for interviews.
Cheryl Mills, Jake Sullivan, and Huma Abedin are among those who did not cooperate with the investigation.
The importance of this goes unstated but we can connect the dots. When a government official or former government official refuses to answer questions in a formal government investigation into potential wrongdoing, this in effect is the assertion of a legal privilege not to speak — otherwise, there is no valid reason not to cooperate.
So what conceivable legal privilege do Clinton, Mills, Sullivan, and Abedin have that would allow them to refuse to answer investigators’ questions? Only one: the Fifth Amendment privilege — i.e., the refusal to answer on the grounds that truthful responses might be incriminating.
I foreshadowed this a few days back in a column, surmising that Ms. Mills must have gotten some form of immunity in exchange for agreeing to be interviewed by the FBI and federal prosecutors:
Earlier this year, a State Department inspector general (IG) issued a report regarding the department’s appalling record of non-compliance with FOIA during Clinton’s tenure. It noted that Mills was well aware that Clinton’s e-mails circumvented State’s filing system and therefore were not searched in order to determine whether some were responsive to FOIA requests.
This was a violation of federal law, which requires each government agency to undertake a search that is “reasonably calculated to uncover all relevant documents.” (See Report at p. 8 & n.29 and pp. 14-15.) Mills not only failed to ensure that such a search was done; she knowingly allowed the State Department to represent — falsely, it turned out — that it possessed no responsive documents.
We now know that, when IG investigators attempted to question Mills to ascertain why she did that, she told them, through her lawyer, that she refused to speak with them. (See January 27, 2016, letter of Senate Judiciary Committee chairman Charles Grassley (R., Iowa) to Secretary of State John F. Kerry.)
She had good reason to take that position: Obstructing an agency’s lawful compliance with a FOIA request could constitute a felony. For present purposes, though, the point is that Mills’s refusal to cooperate with the State Department IG suggests she has concerns about potential criminal jeopardy. It thus seems highly unlikely that she consented to an interview by FBI agents conducting a criminal investigation unless she was given some form of immunity. . . .
So was Mills given at least qualified immunity in exchange for answering the FBI’s questions?
The media was abuzz a few months back when it emerged that Brian Pagliano, the old Clinton hand who was placed on the State Department payroll to service Hillary’s homebrew server, had been given immunity for prosecution in exchange for cooperating with the FBI. Why was it such a big story? Because the conferral of immunity implied that Pagliano believed he’d be incriminating himself if he cooperated with investigators.
Well . . . what are we to make of the refusal by Clinton, Mills, Sullivan, and Abedin to cooperate with the Obama State Department IG?
What are we to make of Mrs. Clinton’s public posturing that of course she is prepared to cooperate — and encourages her subordinates to cooperate — with government investigators?
And how is a former high government official who systematically evaded federal records requirements and then refused to cooperate with a government investigation into that evasion conceivably fit to be president of the United States?


The Wall Street Journal
The State IG finds she knew the security risks she was taking.


· | Review & Outlook
Hillary Clinton has said for more than a year that her use of a private email server as Secretary of State violated no federal rules and posed no security risk. Only the gullible believed that, and now everyone has proof of her deceptions in a scathing report from State Department Inspector General Steve Linick.
The report obtained by news outlets Wednesday is ostensibly an audit of the email practices of five secretaries of State. But the majority of the report, and the most withering criticism, focuses on Mrs. Clinton. The IG concludes that the presumptive Democratic presidential nominee broke federal record-keeping rules, never received permission for her off-grid server, ignored security concerns raised by other officials, and employed a staff that flouted the rules with the same disdain she did.
“Secretary Clinton should have preserved any Federal records she created and received on her personal account by printing and filing those records with the related files in the Office of the Secretary,” says the report. “At a minimum, Secretary Clinton should have surrendered all emails dealing with Department business before leaving government service and, because she did not do so, she did not comply with the Department’s policies that were implemented in accordance with the Federal Records Act.”
State still has never received emails from her private account for the first six weeks after she became Secretary, and the IG notes that it found (by other means) business-related emails that Mrs. Clinton did not include among the emails she has turned over.
The report says she has also stonewalled requests to obtain her server. And “through her counsel, Secretary Clinton declined [the IG’s] request for an interview.” Former Secretaries Madeleine Albright, Colin Powell, Condoleezza Rice and current Secretary John Kerry all sat for interviews.
Mrs. Clinton’s staff abetted her bad practices. The report says the IG “learned of extensive use of personal email accounts by four immediate staff members (none of whom responded to the questionnaire). . . . The material consists of nearly 72,000 pages in hard copy and more than 7.5 gigabytes of electronic data. One of the staff submitted 9,585 emails spanning January 22, 2009 to February 24, 2013, averaging 9 emails per workday sent on a personal email account.”
The IG—who had better hire a food-taster—also found that Mrs. Clinton neither sought nor received permission for her private communications. The former Secretary also understood the security risks this posed because she was warned several times.
In March 2011 the Assistant Secretary for Diplomatic Security sent Mrs. Clinton a memorandum that warned of a “dramatic increase” in attempts by “cyber actors to compromise the private home e-mail accounts of senior Department officials,” with an eye toward “technical surveillance and possible blackmail.”
Following that memo, security staff twice briefed Mrs. Clinton’s immediate staff on this threat. A June 2011 cable, sent over Mrs. Clinton’s name to all diplomatic and consular posts, warned of this new threat to home accounts, as well as the news that Google had reported cyber attacks on the Gmail accounts of U.S. government employees. Mrs. Clinton and her staff ignored her own warnings.
One official suggested State set up a stand-alone computer for Mrs. Clinton in her office to check the Internet and private email. That never happened. A different official suggested she have two mobile devices—one for personal use and one with a “State Department email account” that would “be subject to [Freedom of Information Act] requests.” Her team said no.
As for Mrs. Clinton’s claim that her private account was secure, the report cites several instances of techies shutting down her server due to hacking concerns. “Notification is required when a user suspects compromise of, among other things, a personally owned device containing personally identifiable information,” says the report. But the IG says it found “no evidence” that Mrs. Clinton or her staff filed such reports.
The Clinton campaign is resorting to its familiar strategy of calling this old news while saying everybody does it because Mr. Powell also failed to keep records of private email while he was in office. “GOP will attack HRC because she is running for President, but IG report makes clear her personal email use was not unique at State Dept,” tweeted Clinton spokesman Brian Fallon. But Mr. Powell’s use of private email was limited, and he never set up an unsecure server in his home.
All of this should bear on the FBI’s email probe and whether Mrs. Clinton understood the security risks she was running. On the IG’s extensive evidence, she clearly did—and then she lied about it. Voters should understand that this is precisely the kind of governance Mrs. Clinton would return to the White House.
Posted by Frances Rice at 12:11 PM