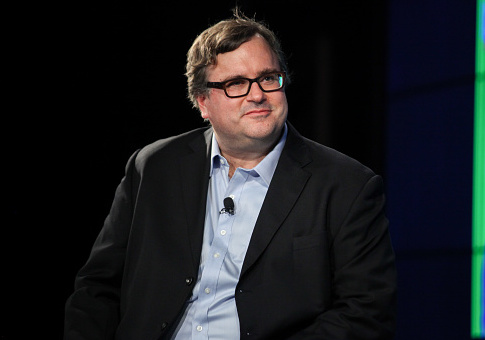 Photo: Reid Hoffman, a venture capitalist and co-founder of LinkedIn has pushed millions into the coffers of Democratic committees (Getty Images)

A new Republican women's group who is "fed up with Trump" and pouring cash into toss-up congressional districts is bankrolled solely by a male billionaire venture capitalist, Reid Hoffman, who is a major donor to Democratic campaigns and causes, Federal Election Commission filings show.

Republican Women for Progress, a Washington, D.C.-based "grassroots" nonprofit, was founded by Jennifer Pierotti Lim and Meghan Milloy and is comprised of "right-leaning" women who are opposed to President Donald Trump. Their PAC is active in New Jersey, Kentucky and Michigan.

The group has garnered glowing national media profiles that include a ten-minute segment on CBS News and articles in publications such as Glamour, Slate, and others.


The group is so far active in competitive congressional districts in New Jersey, Kentucky, and Michigan.

"We think the best thing that we can do for the party and for the country right now is to make sure there are good women—Democrat or Republican—that are elected to office and who can serve as a check on this administration and on the president," Milloy told the Detroit Metro Times. "[This effort] really was inspired by us talking to Republican women in these districts where they said there was just no way that they could vote for the Republican."

The group established a political action committee, the Republican Women for Progress PAC, on Sept. 13 to support their work for the midterms and has since spent $231,000 on independent expenditures for voter recruitment and advertisement productions in the toss-up districts in three states.

The PAC's October quarterly filing—the first from the group—also shows that the group of Republican women is bankrolled by just one donor: Reid Hoffman, a venture capitalist and co-founder of LinkedIn, who is a major donor to Democrats.

Hoffman has pushed millions into the coffers of Democratic committees and campaigns this cycle.

The venture capitalist additionally sent money to a number of Democratic candidates for the House of Representatives and the Massachusetts Republican Party.

The co-founders of Republican Women for Progress previously led Republican Women for Hillary during the 2016 elections. That group was featured on Full Frontal with Samantha Bee, Yahoo News, Wall Street Journal, the Hill, U.S News and World Report, and the New York Times.

"In terms of the Reid Hoffman donation, even a male tech billionaire and major Democratic donor recognizes the important role women should play in the Republican party. We are pleased to have the support of donors across the ideological spectrum to ensure the voice of republican women is heard across the country."

https://freebeacon.com/politics/gop-womens-group-attacking-trump-funded-solely-by-male-democratic-donor/
Posted by Frances Rice at 11:41 AM