It's All Gone: The Democrats' Dead Ideals 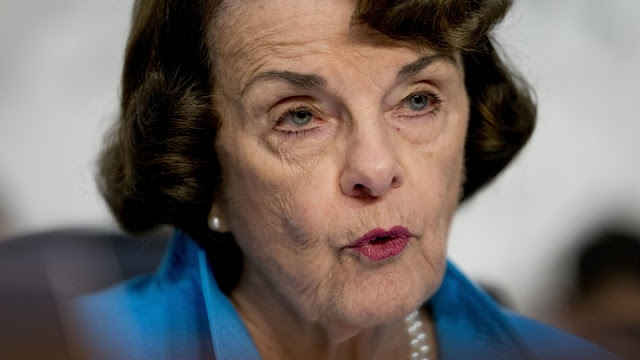 As the spurious case against Brett Kavanaugh disintegrates, splinters, and re-forms into a cacophony of whiny, irrelevant expostulations, it is instructive to step back and survey the field upon which this battle took place.

The ground is littered with dead and wounded ideals: civility, dead; basic decency, dead; the presumption of innocence, gravely wounded, ditto for the idea of due process.

And this disgusting carnage is all on you, O ancient one, Dianne Feinstein, and your self-important, preposterous colleagues. You were desperate to keep Brett Kavanaugh off the Supreme Court so you abandoned any semblance of decency and respect.

You travestied the processes of the United States Senate for the sake of a cynical grab at power. I’d say that you should be ashamed of yourselves, but, like the thugs that you are, you have no shame.

You believe the acquisition of power is a magical antidote to shame. You are wrong about that, and one can only hope that you will one day reap some portion of the obloquy you have sowed.

It is not yet clear what the snarling, incontinent attacks on Brett Kavanaugh will mean for him and his family. Early indications are not encouraging.

For many years, Judge Kavanaugh has taught a course at Harvard Law School. A couple of days ago, that Cambridge-based plutocratic bastion of privilege, smugness, and political correctness announced that Judge Kavanaugh was no longer welcome to teach there. Later,  a coven of lonely and unappealing Harvard feminists filed a battery of groundless Title IX claims against him.

Hundreds of alumni, students, and faculty of Yale Law School have signed an open letter denouncing the school’s implicit support of Judge Kavanaugh’s nomination to the Supreme Court. Among other things, the signatories of this malodorous missive say that Judge Kavanaugh’s nomination represents  “an emergency -- for democratic life, for our safety and freedom, for the future of our country. ... Without a doubt, Judge Kavanaugh is a threat to the most vulnerable. He is a threat to many of us, despite the privilege bestowed by our education, simply because of who we are.”

What are these people talking about? But it is not insanity that moves them. It is malice and the desire for power.

Judge Kavanaugh mentioned in his testimony that one of his delights was coaching girls basketball. Will he be allowed to do that in the future? It is unclear. A putrid column in USA Today by Erik Brady -- silently redacted after a cataract of outrage -- said that “he should stay off basketball courts for now when kids are around.”

Who knows what toll the mob hysteria against him has taken on his wife and two young daughters. One of the most moving moments of his testimony last week came when he mentioned that one of his daughters suggested during evening prayers that they ought to pray for Christine Ford, the hysteric who first accused Judge Kavanaugh of committing an impropriety 36 years ago at a high school party.

A wretched cartoonist for a large national newspaper -- I won’t say which one, and I will forbear to link to that piece of filth -- depicted the judge’s daughter on her knees praying that God forgive “my angry, lying, alcoholic father for assaulting Dr. Ford.”

There are not words sufficiently contemptuous to describe this repulsive display.

Several commentators have drawn parallels between the unfounded attacks on Judge Kavanaugh and the tirades of Senator Joe McCarthy in the 1950s.

A better parallel, perhaps, is the case of Captain Alfred Dreyfus, who was ritually humiliated, drummed out of the French army, and given a sentence of life imprisonment on trumped up charges of espionage. He was eventually cleared, years later, but his career had been shattered and his life ruined. “Where do I go to get my reputation back?”

The real crime of Captain Dreyfus was that he was Jewish. The crime of Brett Kavanaugh is that he is Donald Trump’s nominee.

Here are some facts of the matter.

Until he was nominated by President Trump in July, Brett Kavanaugh was not just widely admired, he was universally commended for his intelligence, his judiciousness, and his impartiality.

Everyone who worked for him, he worked for, and everyone he worked with sang his praises. In the aftermath of Christine Ford’s accusation, scores of women from Judge Kavanaugh’s past -- girls he had been friends with and dated in high school, college friends, professional colleagues -- attested to his integrity and decency.

1.   Rumors of a letter in Senator Dianne Feinstein’s possession are leaked to the jackals of the press.
2.   After the Senate hearings conclude, the letter itself is leaked. It accuses a drunken 17-year-old Brett Kavanaugh of pushing Christine Ford on a bed and fumbling with her bathing suit. (That, by the way, was the alleged “assault.”)
3.   With Deborah Ramirez, the volume increases in this Wagnerian drama. Now an 18-year-old Brett Kavanaugh is accused (no witnesses, though) of exposing himself to Ramirez at drunken party at Yale.
4.   Volume now at full blast, Creepy Porn Lawyer™ Michael Avenatti pushes Julie Swetnick into the jackals’ klieg lights. She says (but offers no proof or witnesses) that she had been at 10 parties -- 10! I guess she liked those soirées --  at which Brett Kavanaugh participated in drugging and gang-raping women.
5.   Another chap, now under criminal investigation for offering false information to the Senate Judiciary Committee, said that Brett Kavanaugh participated in assaulting a woman on a boat in Newport.
6.   Diminuendo now. The Newport story falls apart. The Ramirez story falls apart. The Julie Swetnick story falls apart.
7.   The music is very soft now. Almost every particular of Christine Ford’s story disintegrates.

Remember the second front door she wanted installed in her house as an emergency escape route in case the boogeyman came back and assaulted her?

She said it was in an argument with her husband over that that she first mentioned Brett Kavanaugh.

But that was in 2012, when she was in couples therapy. (It would be nice to know more about Christine Ford’s psychiatric history.)

In fact, the Fords got a permit for the front door in 2008, years before.

Over the years, the front door was used by renters and then for Ford’s psychology practice (though I can see how her patients might have regarded it as an escape hatch).

Remember her supposed fear of flying? It turns out that she flies all the time. The real question is, who gets her frequent flier miles?

Rachel Mitchell, the sex-crimes prosecutor that the GOP senators employed to question Christine Ford at the hearings because she was too delicate to be questioned by men, has released a memo detailing the many contradictions in Ford’s testimony.

8. Back on the ground floor now, the New York Times, in one last, pathetic effort to smear Brett Kavanaugh, runs a piece titled “Kavanaugh was Questioned by Police After Bar Fight in 1985.” The story, written by an anti-Trump, anti-Kavanaugh Times opinion writer, reveals the astounding fact that Brett Kavanaugh might have thrown ice at someone in a bar.

It’s so quiet now that you can hear the titters in the background. From drugging and gang raping women to throwing ice at someone in a bar in one week. Swift work!

At a rally last night, President Trump, speaking about Judge Kavanaugh, said: “A man's life is in tatters. His wife is shattered.” Musing on the attempted public execution the country just witnessed, the president continued, “They destroy people. They want to destroy people. These are really evil people.”

Yes, they are. But here’s the saving grace. The president, like Brett Kavanaugh, is a fighter.

The president’s support has been as unwavering as Judge Kavanaugh’s determination to stay the course. Senator Spartacus (neé Cory Booker, and the accent is not a mistake) says that whether Judge Kavanaugh is “innocent or guilty” the Senate should “move on to another candidate.” Why? Because he’s tainted.

So: Democratic jackals on the Senate Judiciary Committee, aided and abetted by their loyal public relations firms -- the mainstream media -- and hectoring unpleasant people funded by George Soros, heap mud on Brett Kavanaugh for weeks and then step back and say: “He’s got mud all over him! Let’s move on to a more pristine victim.”

This is of a piece with the spurious claim that Judge Kavanaugh’s impassioned testimony last week shows that he lack the requisite judicial temperament to be a Supreme Court Justice. Andy McCarthy dispensed with that ridiculous meme with some portion of the contempt it deserves.

But since some of the squealers in the press have castigated Judge Kavanaugh for the condign anger he displayed in answering the scurrilous attacks on his character, let’s give the last word to Aristotle on the just deployment of anger. “We praise a man,” says Aristotle, “who feels anger on the right grounds and against the right persons, and also in the right manner and at the right moment and for the right length of time.”

Indeed, those who do not get angry at things it is right to be angry at “are considered foolish.” After having been groundlessly accused of drunkenness, belligerence, and rape, Judge Kavanaugh was right to display anger towards those who had slandered him. He did so in a fitting manner, in an eloquent, heartfelt address.

And he did so at the right moment, the Senate hearings, and for the right amount of time.

The travesty that was the smear campaign against Brett Kavanaugh is disintegrating.

He will be confirmed, but the mephitic stench of the attack against him and the rule of law will linger.

I wonder if the Democrats will remember it when the tallies come in on November 6 and their vaunted blue wave turns out to be a moist, impotent trickle.