Op-Ed: This new year, will we divide and be conquered or unify for victory 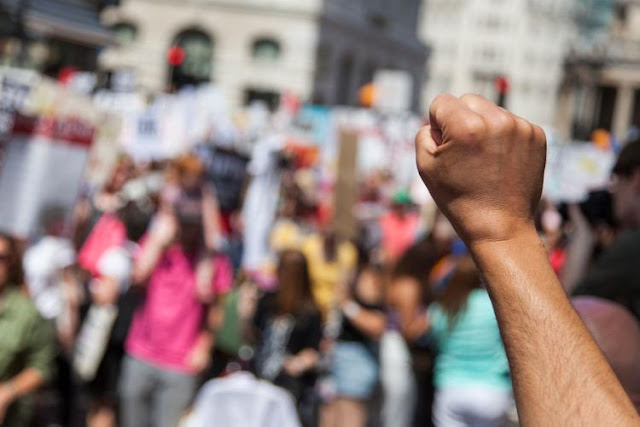 “Divide and rule, the politician cries; Unite and lead, is watchword of the wise.”
– Johann Goethe

No one will dispute relationships in America’s political theater are about as cordial as two Roller Derby teams dueling for points in the final jam on a late night TV show. These skaters are void of mercy since TV ratings are their bread and butter: The better the show, the more money. It’s not wining or losing that lures fans each week to the Derby. Its antics and gimmicks that keep people spellbound. And today’s divided voters think Congress is putting on a better show than two truculent Roller Derby teams each session. Bad showmanship has replaced yesteryear’s art of governing.

There is no such thing as an angel in Congress. But the subterfuge of divide and conquer reached its pinnacle when Donald Trump took office. The progressives made it their intention to ensure the failure of this president. This is a personal vendetta since Americans rebelled against the antics of Barack Obama’s court jesters. Obama used every dictum in Saul Alinsky’s rulebook to dial our nation’s clock back to the era of Franklin D. Roosevelt. Obama did not miss a beat blaming his failures on anyone who was not a progressive. He “gang-governed” like a schoolyard bully. That’s why voters elected Trump.

“People are fed up with people who are career politicians who don't stand for anything.”
– Carlos Beruff

It’s a mystery why past conflicts were resolved amicably while today they are uncivil wars. Why has politics turned into jousting matches for public servants who were hired to govern? Most theorists agree: Putting on a show is easier than passing law. Since the new progressive era, Americans on the right of center have been proselytized that the left side is too big to fall so it is easier to trade insults than adjudicate. This emboldens continual theatrics for their loyalists at the expense of governing.

Progressive Americans have replaced nationalism with separatism and have convinced their flock to set aside internal bickering for the sake of a united front. This allows them to power broker deals behind closed doors, out of public sight and out of media pages. This commonality gives them the numbers to secure electoral and legislative victories while the center right is trying to find a plan to cut their losses. Since it’s impossible to present reason to those who prefer feel good politics over real law, there’s no united leadership for opposition. It’s easier to say, “Well, we tried our best” than to actually do their best.

“He is short-sighted who looks only on the path he treads.”
– Kahlil Kibran

William Shakespeare wrote, “All the world’s a stage, and all the men and women merely players.” The script that new-era progressives follow is as predictable as the plot in a grade C matinee movie. Facts and figures are irrelevant. The name calling blame-game keeps their opposition on defense. This ensures victory. The divided right takes this bait and fights over it like hungry catfish. With too many “wannabe” leaders, you have none. The best-equipped army will lose every battle without a committed general.

“If the generals don't panic; then the troops never panic.”
– Shaquille O'Neal

A recent New York Post reporter wrote: “The three tenets of Obama Left politics were 'Divide and rule, weaken and conquer, hate and enslave.' The right has not realized this by now.” After allowing two years of continual ridicule of President Trump by members of his own party, the GOP proved they learned nothing from Obama’s stratagem. Instead of solidifying their strategy, they continue to give away the cow with the milk, by fighting a civil war on every tangible front. And the progressive public promulgation labyrinth uses every barbaric battle as fuel to propel its anti-Trump machine.

“It takes considerable knowledge to realize the extent of your own ignorance.”
– Thomas Sowell

Obama is the first former president to publicly castigate his successor. He commands a gang of 30,000 devotes from a bunker two miles from the White House. He works behind the scenes to protect his tainted legacy by sabotaging Trump’s popular “America First” agenda. He oversees a veiled leftist nonprofit, “Organizing for Action.” They have a growing war chest and over 250 offices across America. This well-funded group recruits young liberal activists. Their motto is, “We’re not backing down.” Their rostrum is ObamaCare, race relations, climate change and nothing more. Their limited platform was adopted from the U.S. Navy.

OFA is a 501 nonprofit, so it doesn’t have to disclose its generous donors. It's raised $40 million since evolving from Obama’s campaign organization. Armed with Obama’s campaign database, they organized this year’s bloodbath of Congress. Obama is directly involved in grooming progressive candidates to protect his legacy by taking the Senate and oval office next election. Knowing this is a census year, this will enable them to snake progressive districts to control America for decades.

“We’re going to be in a position we can start cooking up all kinds of great stuff.”
– Barack Obama

Obama is currently instructing American liberalists how to marshal the new socialist democracy he couldn’t finish doing when Hillary lost to Trump. The GOP rolled over last election and watched this take place. Is the liberal left really gone too far to stop them from rewriting the Constitution by fiat? The way the center right and GOP are acting, there is no stopping them unless they clean up their act. It’s impossible for them to deliver a nation united, until they have a house that is un-divided!

Alexandre Dumas, author of The Three Musketeers, wrote, “All for one and one for all, united we stand divided we fall.” He referenced the need for camaraderie during the power struggles of 17th century France. This was a typical swash-buckling, romance and adventure novel, emblematic of this period. But Dumas’ real goal was to convince his readers that “when one battles alone, it’s always bad. But when all band together, good things can be achieved.” He takes great pains to weave this into his plot since criticism of government back then cost one his head.

“They would have too easy a conquest over four separate men; whilst four men united make a troop.”
– Alexandre Dumas

Dumas wrote, “Order solves all problems.” Progressives have zero principles. Their plan is to disrupt those that do. And their success relies in maintaining the divided right. True leaders build consensuses, not destroy them. That’s cardinal for quality leadership. Trump was sent to D.C. by the right of center and independents, not progressives. But as long as his base is more concerned with leftist criticism than unity, this chaos will dominate these indulgent masses. And the more they become divided and the longer they continue to be divided, they will be conquered again and again.

What separates men from animals is the ability to look outside themselves and abandon personal passions in favor of rationale for survival. The center right has the ability to turn conflict into strength. It’s time for legitimate factions to listen to the people who gave them authority to govern. They were elected to defend the U.S. Constitution and the president’s agenda, not bow to unpopular, inerudite criticism from the media. The far left has over-sold their message, but the right can’t find a message to agree upon! Internal dissention deprives us from a cohesive coalition to expose the myth of their negative progressivism.

“The end is what you want and the means is how you get it.”
– Saul Alinsky

In 360 BC, Philip II of Macedon developed the strategy of maxim divide et impera. He was the first to openly divulge his theory of gaining power by dividing large groups into fragmented factions that disabled their power to defend against conquest. It‘s a tactic repeated for centuries by successful rogue leaders. The right of center coalitions must make a New Year’s resolution this year to unite under one flag to defend our free market capitalism – the lifeblood of republicanism.

John Adams wrote: “Liberty, once lost, is lost forever.” Least we never forget:
“A person who doubts himself is like a man who would enlist in the ranks of his enemies and bear arms against himself. He makes his failure certain by himself being the first person to be convinced of it.”
– Alexandre Dumas