If You Wanted to Rig An Election, You'd Do Exactly What Dems Did in 2020 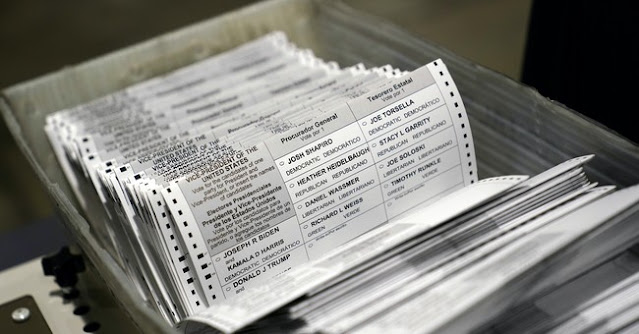 This column does not in any way allege that Democrats, Joe Biden, the Mainstream media, Big Tech, or any other entrenched, left-leaning institution in this country rigged the 2020 election.

God forbid anyone would think such a thing.

If this column were to even come close to making such an assertion, it would be flagged, banned, and removed from social media platforms and other avenues of entry to this website in an effort to prevent the unwashed masses from informing themselves of the facts surrounding this past ballot process.

So, let us repeat: This column does not accuse the Biden campaign or the Democratic Party of cheating in the 2020 election.

That said if they were going to cheat...here's what they would have done.

First, they'd make sure that the voter rolls were full of ineligible voters. Deceased people, non-citizens, and people who have moved out of state would not be purged from the rolls, and there would be no mechanism in place to purge those ineligible voters.

Further, they wouldn't have any preemptive check to ensure that only eligible voters registered in the first place. For instance, you can't get a job in this country without showing a passport, birth certificate, or green card for a standard I-9 form. This ensures that only people eligible to legally work here get a job. There is no such citizen check when you register to vote. It's on the "honor system" that you are a legal citizen when you fill out your registration form. And, let's face it, why would someone who breaks our immigration laws by entering, staying, and working in our country illegally ever break our election laws, too? That's a solid policy there.

Next, they'd modify existing election laws so that voters could mail-in ballots on a whim and not for a specific "absentee voting" reason. This way, in-person voting (the most secure kind of voting) would diminish, and mail-in voting (the least secure) would increase.

Next, they'd send a ballot to every voter on the voter rolls regardless of whether they asked for an absentee ballot or not. This way, millions of live ballots are floating in the system and are outside the tight custodian controls of the election apparatus in your state.

Now that they've hypothetically flooded the zone with millions of ballots that have been sent out to everyone, regardless of their eligibility to vote, they would need the policy to count every vote that came in, even votes that shouldn't be counted.

Here's how they'd do that...again if they were to cheat. Not that this column would ever suggest that they did cheat. This is all just an academic exercise, you see?

First, they'd count ballots without any careful check of the signatures on the ballot versus the signature on the voter's registration.

They'd then separate the envelopes and any other identifying documents from the ballots themselves and discard them. This would make it hard to verify the validity of each ballot and impossible to check for duplicates or dead voters.

To add to the hypothetical cheat totals, they'd count ballots that were received after Election Day.

Plus, you'd stop counting at a certain point so you could properly ascertain exactly how many votes you'd need to "find" to help your chosen candidate win the counting process.

Next, you'd conduct the counting and verification process without any legitimate oversight. If you were really brazen, you'd keep election watchers 30 or 40 feet away from the processing area, or you'd even put giant sheets of poster board in the windows outside the processing room so that observers couldn't see from the hallway outside your operation.

Again, to reiterate, this column does not suggest that Biden or his party cheated or in any way rigged the process so that cheating could easily occur in the 2020 election.

We are merely pointing out that if they wanted to cheat and rig the system...they'd do exactly what they did.