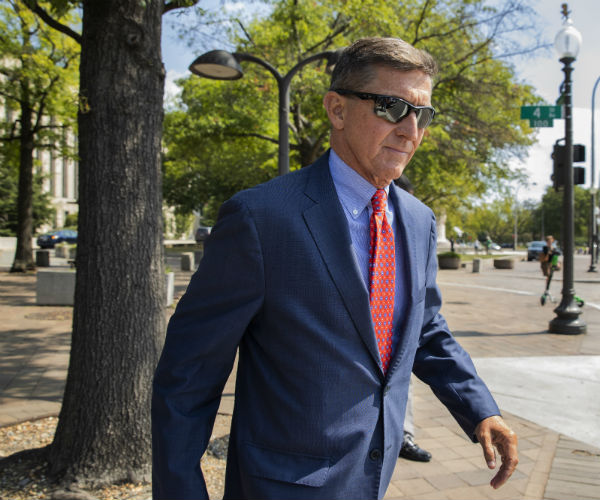 Washington Democrats, much of the major media, and other "Trump haters" have a new hero — the once very highly respected U.S. District Court Judge Emmet G. Sullivan in Washington, D.C.

Why is he their hero?

It's not because of his stellar reputation in the District of Columbia’s legal and judicial systems; appointments to the bench by President’s Ronald Reagan, George H.W. Bush and Bill Clinton; being named by former Supreme Court Chief Justices William H. Rehnquist and current Chief Justice John G. Roberts to prestigious federal judiciary oversight roles; and, especially not for his criticism of Hillary Clinton and her use of private e-mails during her tenure as secretary of state.

Sullivan is their hero because he has put the brakes on the Department of Justice’s (DOJ) efforts to dismiss the case against former National Security Adviser Gen. Michael Flynn.

Just when many Trump supporters thought that Flynn’s long nightmare of political persecution was finally coming to an end, Sullivan not only refused to agree to DOJ’s request for dismissal, he invited outside parties to submit comments on Flynn’s case.

If this were not enough to bring cheers from the galleries of the Trump hating left and media, he appointed retired federal judge John Gleeson to present arguments opposing the DOJ’s request to drop the charges against Flynn; and, explore whether or not Flynn lied to Sullivan and should be held in criminal contempt for perjury.

Keep in mind that Gleeson co-authored an editorial in The Washington Post questioning whether the Justice Department acted honestly in seeking the dismissal — "The record reeks of improper political influence."

Such action was unusual to say the least.

Flynn’s attorney, Sidney Powell, said in response that Sullivan had " . . . on twenty-four (24) previous occasions — summarily refused to permit any third party to inject themselves or their views into this case."

Even more to the point, Sullivan’s actions may contravene a recent U.S. Supreme Court 9-0 opinion, authored by Justice Ruth Bader Ginsburg, U.S. v. Sineneng-Smith, that overturned a Ninth Circuit Court of Appeals decision because outside groups were invited to participate.

So why did Sullivan make an exception in Flynn’s case?

Judges, especially federal judges with lifetime appointments, have a special fiduciary duty to be beyond repute, above partisan politics, and obedient to the U.S. Constitution.

The vast majority are.

Conservatives will argue that Sullivan put his judicial foot on the scales of justice making him an easy target for those accusing him of politicizing the judicial process.

It could be argued that he may be suffering from Washington’s "Trump Derangement Syndrome" which infects so much of the Washington Democratic — and media establishments.

Until Sullivan’s surprising actions, many felt that, in most cases, at least the D.C federal judiciary was immune to the infection.

If anyone needed any more evidence of Sullivan’s bias, recall his comments to Flynn in a 2018 sentencing hearing when he actually questioned the former three star General’s patriotism telling him: “Arguably, you sold your country out.”

The message was clear — he did not like Gen. Flynn.

Mark Levin, former Chief of Staff to U.S. Attorney General Edwin Meese, called Sullivan a "rogue judge" who was “out of. . . control and should recuse himself."

There is no doubt that those who file "comments" against Flynn and the DOJ, including Gleeson, will be the stars of the hate Trump media and praised by those on the left who consider Sullivan a hero.

Judge Sullivan may find that his actions, which most likely will be overturned on appeal, may result in his once good reputation being irreparably damaged.