List of officials who sought to 'unmask' Flynn released: Biden, Comey, Obama chief of staff among them 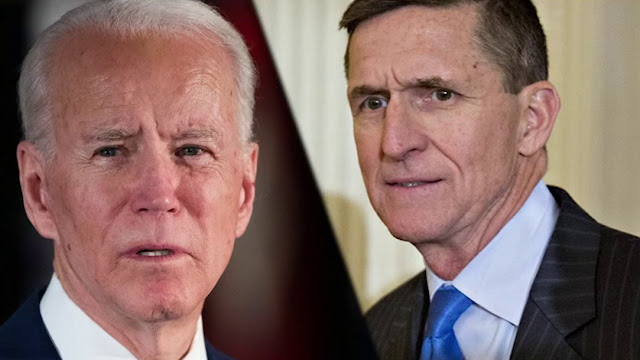 Top Obama administration officials purportedly requested to "unmask" the identity of former national security adviser Michael Flynn during the presidential transition period, according to a list of names from that controversial process made public on Wednesday.

The list was declassified in recent days by Acting Director of National Intelligence Richard Grenell and then sent to GOP Sens. Chuck Grassley and Ron Johnson, who made the documents public. The roster features top-ranking figures including then-Vice President Joe Biden -- a detail already being raised by the Trump campaign in the bare-knuckle 2020 presidential race where Biden is now the Democrats' presumptive nominee.

"I declassified the enclosed document, which I am providing to you for your situational awareness," Grenell wrote to the GOP senators in sending along the list.

Grenell’s note was addressed to Sens. Grassley, R-Iowa, and Johnson, R-Wis., who had penned a letter to him and Attorney General Bill Barr regarding the declassification of files related to the unmasking process earlier in the day.

As Fox News previously reported, Grenell already made the decision to declassify information about Obama administration officials who were involved in the “unmasking” of Flynn — whose calls with the former Russian ambassador during the presidential transition were picked up in surveillance and later leaked. His case has returned to the national spotlight after the DOJ moved to dismiss charges against him of lying to the FBI about those conversations, despite a guilty plea that he later sought to withdraw.

Trump allies claim Flynn was wrongly targeted, and have suggested high-level involvement in an effort to bring him down. Democrats, however, claim the DOJ's decision to abandon the case shows how it has become politicized.

Both the DOJ and Grenell had been discussing these "unmasking" files, after Grenell appeared to have delivered those files to the department last week. There were some tensions between the two offices over who would actually pull the trigger to release them -- ultimately, the publication came from Capitol Hill after Grenell sent lawmakers the files.

The declassified list specifically showed officials who “may have received Lt. Gen Flynn’s identity in response to a request processed between 8 November 2016 and 31 January 2017 to unmask an identity that had been generically referred to in an NSA foreign intelligence report,” the document, obtained by Fox News, read.

“Each individual was an authorized recipient of the original report and the unmasking was approved through NSA’s standard process, which includes a review of the justification for the request,” the document said. “Only certain personnel are authorized to submit unmasking requests into the NSA system. In this case, 16 authorized individuals requested unmasking for [REDACTED] different NSA intelligence reports for select identified principals.”

The document added: “While the principals are identified below, we cannot confirm they saw the unmasked information. This response does not include any requests outside of the specified time-frame.”

The day McDonough requested the information is the same day as an Oval Office meeting that has drawn scrutiny in the wake of the Flynn developments. The meeting included Obama, Biden, Clapper, Brennan, Comey, then-National Security Adviser Susan Rice and then-Deputy Attorney General Sally Yates.

That meeting was the first time Yates learned about Flynn's calls with then-Russian Ambassador Sergey Kislyak, according to notes from her special counsel interview which were released last week. Yates, in her interview, indicated Obama was aware of Flynn’s intercepted December 2016 phone calls with Kislyak during the presidential transition period.

After the briefing, Obama asked Yates and Comey to "stay behind," and said he had "learned of the information about Flynn" and his conversation with Russia's ambassador about sanctions. Obama "specified that he did not want any additional information on the matter, but was seeking information on whether the White House should be treating Flynn any differently, given the information.”

That Oval Office meeting aligns with an email that Rice — on Jan. 20, 2017, the day President Trump was sworn into office — sent herself documenting Obama’s guidance, evidently in the same meeting, about how law enforcement should investigate Russian interference in the 2016 presidential race.

“President Obama began the conversation by stressing his continued commitment to ensuring that every aspect of this issue is handled by the intelligence and law enforcement communities ‘by the book,’” Rice emailed to herself. “The president stressed that he is not asking about, initiating or instructing anything from a law enforcement perspective. He reiterated that our law enforcement team needs to proceed as it normally would by the book.”

The email also appeared to reflect Obama’s guidance on sharing sensitive information with both the Russians and the incoming Trump administration.

Rice wrote that Obama said, “he wants to be sure that, as we engage with the incoming team, we are mindful to ascertain if there is any reason that we cannot share information fully as it relates to Russia.”

Meanwhile, the unmasking documents come just a day after Biden initially told ABC News’ “Good Morning America” that he knew “nothing about those moves to investigate Michael Flynn,” and called the topic a “diversion” from the coronavirus pandemic.

Biden was pressed on the issue, and then clarified: “I thought you asked me whether or not I had anything to do with him being prosecuted. I’m sorry. ... I was aware that ... they asked for an investigation, but that’s all I know about it, and I don’t think anything else.”

“Joe Biden’s limp claim that he doesn’t know anything about the railroading of Gen. Michael Flynn just got even more unbelievable. Biden is listed among the Obama administration officials who requested the unmasking of Flynn," Parscale said in a statement. "We already knew Biden was briefed on the Flynn case before President Trump took office and now we know that he wanted Flynn unmasked."

He added: "Americans have a right to know the depth of Biden’s involvement in the setup of Gen. Flynn to further the Russia collusion hoax.”

The Biden campaign countered by accusing the Trump camp of "lying," pointing to an argument that those on the list merely made requests that "might" have unmasked Flynn. The documents released Wednesday give a mixed picture on this, saying the list covers officials who requested to unmask Flynn's identity, but also saying the identity they sought was at first only "generically" referenced in an intelligence report.

"These documents have absolutely nothing to do with any FBI investigation and they confirm that all normal procedures were followed -- any suggestion otherwise is a flat out lie,” Bates said. “What's more, it's telling that these documents were selectively leaked by Republicans abusing their congressional powers to act as arms of the Trump campaign after having them provided by a partisan official installed for this very purpose."

The unmasking concerns events between the November 2016 election and Inauguration Day 2017. Unmasking occurs after U.S. citizens' conversations are incidentally picked up in conversations with foreign officials who are being monitored by the intelligence community. The U.S. citizens' identities are supposed to be protected if their participation is incidental and no wrongdoing is suspected. However, officials can determine the U.S. citizens' names through a process that is supposed to safeguard their rights.

Meanwhile, Sen. Rand Paul, R-Ky., on Wednesday penned a letter to Grenell inviting him to testify before the Senate Subcommittee on Government Oversight next week about the unmasking of Flynn, noting that he has questions about what Biden and former President Barack Obama knew.

“During my prior oversight of this matter, I met several dead ends, and I have many remaining questions in regard to President Obama’s administration abusing its authority,” Paul wrote to Grenell Wednesday. “Unlawful unmasking of U.S. persons should never be swept aside in hopes of being forgotten in time.”

But a senior administration official told Fox News that Grenell will not testify.

The official said that Grenell will be "continuing his efforts to be transparent and will continue to be responsive to congressional requests for documents, but will not appear for testimony."

Officials in the Obama administration have acknowledged that they moved to unmask some Americans in intelligence reports, but insisted that their reasons were legitimate. Those officials include Rice, Power and former deputy national security adviser Benjamin Rhodes.

A Justice Department official told Fox News this week that the DOJ has been reviewing the unmasking of U.S. officials as part of its broader examination of the origins of the Trump-Russia investigation and was taking a look at the files that Grenell declassified and delivered to the Justice Department last week.