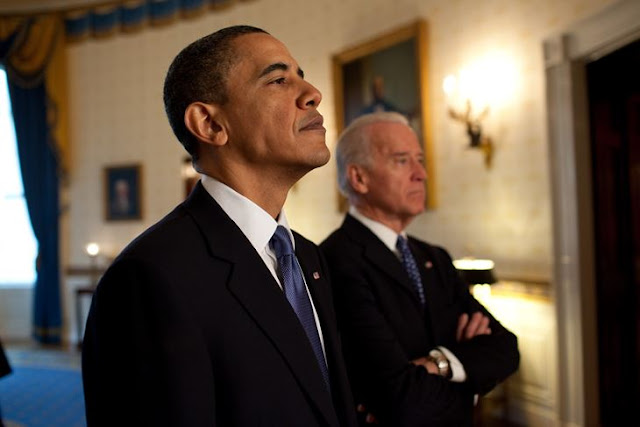 President Barack Obama and Vice President Joe Biden wait in the Blue Room of the White House before delivering remarks and signing the health insurance reform bill. (Official White House Photo by Pete Souza)
On January 5, 2017, a meeting was held in the Obama White House in the Oval Office. Both President Obama and Vice President Biden attended. This meeting, it turns out, was critical to the anti-Trump operation by the Obama administration, reports Mollie Hemingway at The Federalist. “It was at this meeting that Obama gave guidance to key officials who would be tasked with protecting his administration’s utilization of secretly funded Clinton campaign research, which alleged Trump was involved in a treasonous plot to collude with Russia, from being discovered or stopped by the incoming administration,” she wrote.

It was at this meeting that Barack Obama spoke with Yates and Comey about wiretapped conversations of Trump’s incoming National Security Adviser Gen. Michael Flynn with then-Russian Ambassador Sergey Kislyak during the Trump transition, indicating that President Obama was directly knowledgeable of the efforts to surveil the Trump campaign and undermine the incoming administration.

Susan Rice wrote herself a now-infamous email documenting the meeting, writing “President Obama said he wants to be sure that, as we engage with the incoming team, we are mindful to ascertain if there is any reason that we cannot share information fully as it relates to Russia.”

Top Obama officials have since testified that they never had any empirical evidence of collusion between the Trump campaign and Russia.

As Hemingway notes, “explosive media leaks were a key strategy in the operation to take down Trump.” Per Obama’s direction, information on Russia was “not fully shared with the incoming Trump team” and “the leaks and ambushes made the transition chaotic, scared quality individuals away from working in the administration, made effective governance almost impossible, and materially damaged national security.”

President Trump has indicated that more damning evidence against Obama and Biden will see the light of day.

“There’s more to come, from what I understand. and they’re gonna be far greater than what you’ve seen so far—and what you’ve seen so far has been incredible—especially as it relates to President Obama because if anyone thinks that he and sleepy Joe Biden didn’t know what was going on, they have another thing coming.”

“It is clear that understanding what happened in that January 5 Oval Office meeting is essential to understanding the full scope and breadth of the corrupt operation against the Trump administration,” explained Hemingway.
It’s time to get some answers, especially from Barack Obama and Joe Biden.
_____