It's Come To This: Liberals Engage In Prayer Shaming During San Bernardino Shooting 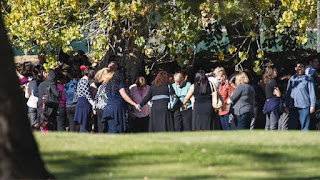 Without shame, liberals/Progressives mocked Christians who offered consoling prayers for the victims of Islamic terrorists waging jihad – a holy war against Christians – in San Bernardino.

Yet, these same liberals/Progressives applauded the ineffective hashtag campaign, "# return our girls!", publicized by Michelle Obama that was aimed at getting results from the Boko Haram terrorists group in Africa. Given a choice between sending a laughable hashtag entreaty via the Internet to a bloodthirsty group of terrorists and providing solace via community prayer to the victims of terrorists, I chose prayer.

It's Come To This: Liberals Engage In Prayer Shaming During San Bernardino Shooting

Being that the United States is the most religious country in the industrialized world, it's safe to say that many people offer prayers when tragedy strikes. During and after the horrific mass shooting in San Bernardino, California, which left 14 dead, liberal America had a rather vile reaction to those who were offering prayers for the victims–they shamed them for doing it.

Guy nailed it on the head. After years of failing to convince the public that their agenda of confiscating firearms from law-abiding citizens was a good policy, liberals have declared war on the prayer-giving public, especially the 2016 Republican candidates who offered their condolences via social media.

Emma Green wrote in The Atlantic about the shaming, but also the long history of prayer in American politics–and it's deeply ingrained in the activism from the abolition movement to women's suffrage. Green adds that if you can find any instance in which Americans were fighting for their civil rights, prayer was in the mix. Moreover, what's pernicious about this sentiment on the left is the gross assumption that those who pray, aka Christians, are somehow all for gun rights.

At the same time, what makes the left look even more ridiculous in their shaming, is that those who could have been killed when Syed Farook and Tashfeen Malik decided to start shooting were asking for prayers. Terry Pettit received a text from his daughter, who was inside the building, asking him to say a prayer for her and her co-workers when the attack began:

Prayer and political action have a deeply entwined history in America. From civil rights to women's suffrage, nearly every social-justice movement has had strong supporters from religious communities—U.S. history is littered with images like the one of pastors and rabbis marching on Selma, side by side with political activists.

There are many assumptions packed into these attacks on prayer: that all religious people, and specifically Christians, are gun supporters, and vice versa. That people who care about gun control can't be religious, and if they are, they should keep quiet in the aftermath of yet another heart-wrenching act of violence. At one time in American history, liberals and conservatives shared a language of God, but that's clearly no longer the case; any invocation of faith is taken as implicit advocacy of right-wing political beliefs.

The most powerful evidence against this backlash toward prayer comes not from the Twitterverse, but from San Bernardino. "Pray for us," a woman texted her father from inside the Inland Regional Center, while she and her colleagues hid from the gunfire. Outside the building, evacuated workers bowed their heads and held hands. They prayed.

When prayer has become a political punching bag, you know something is wrong…with the other side. Should we be shocked? Probably not–remember when the Democratic Party, which holds positions that align with most of these clowns' political leanings, pretty much booed God during their 2012 convention.

I admit I'm not the most religious of people. The gift of having a deep faith is something that I was born without, but that doesn't mean I don't respect the religious convictions of my friends, family, or colleagues, nor do I completely disregard the role religion has played in this country. For starters, religious organizations have done more to help the urban poor than government ever has. And, yes, last night I did say a prayer for the victims of the San Bernardino mass shooting because that's the least I could do in the wake of such tragedy. I decided not to look for how to score a political win from this, or have a smug "I told you so, prayer sucks" attitude in the wake of this tragedy. I didn't throw a temper tantrum because I couldn't convince the majority of the American public, or Congress, that my awful political views and policy ideas on firearms should be made into law.

I know this is hard for some liberals but gun control won't solve mass shootings. It never will. In general, those who have fit the profile of past mass shooters soar into the tens of millions. This is an issue that intertwines constitutional law, the field of medicine, and privacy. It's going to be a long debate, maybe even a messy one. The problem is that liberals don't want that debate.

Concerning San Bernardino, we have no motive. We don't know if ISIS motivated this horrific crime. We'll have to wait and see. Without such information, it's impossible to determine if this was an act of terror or workplace violence. For now, yes, say a prayer for the victims and their families. If you're atheist, keep them in your thoughts. For all of us, we should acknowledged and thank the police and first responders who worked tirelessly to save lives. Say a prayer that they have the strength to do it all over again the next day.

If you're a liberal, I guess you'll continue to shame the victims of this tragedy. You'll probably boo God again at the 2016 convention–and you're going to lose (once again) the debate on the Second Amendment.