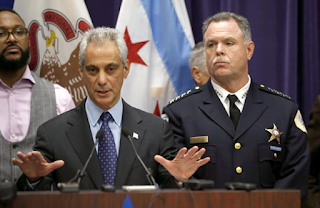 When Black Lives Matter protesters disrupted Democratic presidential candidates, liberal Democrats hemmed and hawed. Why protest your political allies, many asked, rather than target your foes?

Protest is, at its core, designed to move policy. And today, for the vast majority of African Americans, the politicians in the best position to move policy for people of color, particularly at the local level, are Democrats. Democrats run most of the big cities where black people live, and they often lead the county and state prosecutors' offices covering smaller, Republican-run cities like Ferguson, Missouri.

This last point highlights an anomaly that makes BLM protests of Democrats more logical than you might think at first blush. The fact is that the district attorneys who have made the decisions sparking some of the most vibrant outrage and protests have been Democrats. And that gives BLM potential leverage over those Democrats that it can never have over Republicans—if the movement figures out how to use it.

Ironically, Republican prosecutors, perhaps because they lack political incentives to pander to black voters but are compelled by the fear of Baltimore- and Ferguson-style protests, have brought or presided over grand juries that have swiftly filed charges against police officers in New Orleans, in Cincinnati following the shooting of Samuel Dubose, and in the Walter Scott case in North Charleston, South Carolina.

But the Democrats have been the problem.

Bob McCullough, the St. Louis County prosecutor who guided a grand jury to clear ex-police officer Darren Wilson in the killing of Michael Brown, actually defeated a black woman, Leslie Broadnax, in the 2014 Democratic primary in St. Louis County before cruising to reelection. McCullough delivered what sounded like a defense closing argument for Wilson during his disastrous nighttime press conference to tout the grand jury result, triggering massive protests that resulted in violent clashes between protesters and an aggressive, militaristic police force. He is up for re-election in 2018.

A major loss by a Democratic prosecutor at the hands of the BLM movement could alter the political landscape in a way that might actually change the way prosecutors, and ultimately police departments, operate.

Tim McGinty, the Cuyahoga County, Ohio, prosecutor who has allowed the Tamir Rice case to drag on for a year via a grand jury, is a Democrat, too. He recently drew outrage for appearing to attack Tamir Rice's mother and her attorneys as "financially motivated" in their pursuit of justice for the 12-year-old boy who was shot by a Cleveland police officer as he played with a toy gun at a community center last November. McGinty's leaks of reports by hand-picked experts justifying the shooting have led Rice's family and community activists to call on McGinty to recuse himself from the case, amid concerns he is laying the groundwork to recommend that a grand jury exonerate the two officers involved in Rice's killing. McGinty is up for re-election next year, and faces a March Democratic primary.

But the gold medalist here may be Anita Alvarez, who narrowly won a Democratic primary in 2008 before riding the Obama wave into office as the first Latina to hold the State Attorney position in Chicago. She has an awful reputation among black Chicagoans, who accuse her of protecting the powerful, including police, while vigorously prosecuting the weak, and refusing to revisit cases in which incarcerated persons appear to be innocent.

Activists have accused Alvarez of throwing the case against the officer who killed Rekia Boyd in 2012 by bringing the wrong charges, for which the judge who dismissed the case blasted her office. She is now being criticized for over-charging in the 16-shots police killing of Laquan McDonald. It took her office 13 months to file the case, and she admitted that she announced the charges last week only because a judge ordered the dashcam video of the shooting released.

Alvarez was easily re-elected against a Republican challenger in 2012 and is up for re-election in 2016. She has a primary challenger, after black leaders openly sought an alternative. Activists including the National Bar Association and Color of Change have called on Alvarez, Mayor Rahm Emanuel, and Chicago police chief Garry McCarthy to resign over the 400-day delay and what many call a potential cover-up of a shooting that took place in the midst of Emanuel's contentious reelection run-off.

There are certainly problem Republican prosecutors, too. Staten Island D.A. Daniel Donovan was rewarded with a Republican congressional seat after a grand jury failed to indict the officer whose chokehold killed Eric Garner. And while black Floridians and seasoned attorneys widely fault conservative Republican Jacksonville prosecutor Angela Corey's office for blowing the case against cop wannabe George Zimmerman for killing black teenager Trayvon Martin (though she did win a conviction against the man who killed black teenager Jordan Davis), Corey's re-election in 2016 seems secure. In fact, losing the Zimmerman case will likely help Corey in deep red Duval County.

In such cases, the leverage black activists have is less at the ballot box than in the streets.

But with Democratic prosecutors, the incentives shift. Elections are the ultimate leverage for the black community over Democrats, and when these politicians inevitably make the rounds of black churches to drum up votes from the most loyal segment of the party base, how those pastors and parishioners respond as voters could mean the difference between reelection and unemployment for the McCulloughs and McGintys and Alvarezes of the world.

A major loss by a Democratic prosecutor at the hands of the BLM movement could alter the political landscape in a way that might actually change the way prosecutors, and ultimately police departments, operate.

At the moment, Black Lives Matter activists are mainly focused on direct action protest and presidential politics. If they and white voters who consider themselves allies were to turn that energy to down ticket politics, citizens who are troubled by the state of police-community relations could wind up with more prosecutors like Marilyn Mosby, who singlehandedly reversed the despair of black Baltimoreans by bringing charges against six officers involved in the death of Freddie Gray; or Brooklyn D.A. Ken Thompson, who brought charges against the officer who fired his service weapon into a darkened stairwell of a New York City housing project last November, killing 28-year-old Akai Gurley.

Many criminal justice reform advocates agree that nothing would change the dysfunctional dynamic between African Americans and police more than a good-faith belief among the latter that it is at least possible to hold the state's armed wing accountable for the unjustified taking of black lives. All the body cameras and training in the world can't beat the fundamental shift that starts with a willingness among prosecutors to treat rogue officers the same way they treat rogue civilians.

And since Americans have decided to elect our prosecutors—and many of our judges—it would be perfectly rational for the Black Lives Matter movement to focus on the politicians black citizens have the clearest opportunity to elect or send packing, from the state attorney's office to the White House: namely, Democrats.