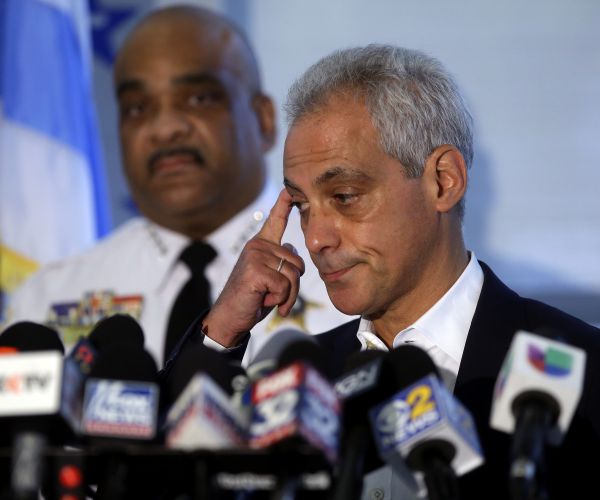 Chicago Police Superintendent Eddie Johnson listens as Chicago Mayor Rahm Emanuel speaks about Chicago's weekend of gun violence during a news conference at the Chicago Police Department 6th District station August 6, 2018 in Chicago, Illinois. Chicago experienced one of it's most violent weekends of the year, after more then 70 people were shot, with 12 fatalities. (Joshua Lott/Getty Images

As I wrote in this space on October 15, 2015, in an article entitled “Rahm Emanuel Is Failing Chicago,” “Chicago is America’s Afghanistan.”

Three years later, America’s version of the “Killing Fields” continues. According to the Chicago Tribune’s crime tracking team, as of August 6, 318 people have been killed and 1,785 have been shot this year alone.

Fox News political analyst Gianno Caldwell, who is black with family in Chicago, has been touched by the violence. He puts it in vivid perspective in his recent opinion article for Fox News:

“The gun and gang violence rampant in Chicago… is a daily, piercing threat. Bullets are indiscriminate, and the death toll has a crippling grip on Chicago’s black community that continually seeks help from state and local leaders — only to be met with more disappointment and yet another funeral… for black kids… going out to play in their own neighborhoods or even their own backyards may be a life and death decision.”

Caldwell is not some casual observer. To him, it’s personal.

During Memorial Day weekend last year, his younger brother was sitting in a car with friends on Chicago’s south side when two men fired 25 rounds into their car. His brother survived but his best friend died in his arms.

The political and media reaction to such violence is, of course, based on race and identity politics — the color of the skin of the perpetrators and their victims. Just look at the following example.

A white man shoots and kills a black man in a fight over a parking space in Clearwater, Florida. The Reverend Al Sharpton and all five Democratic candidates for Governor show up at a church rally protesting Florida’s Stand Your Ground Law.

The law was used by the local sheriff as a reason for not arresting the white shooter. Even Trump endorsed Republican Gubernatorial candidate Ron DeSantis — in a rare display of a Republican candidate appealing to black voters’ concerns — jumped into the controversy. He criticized the sheriff for misinterpreting the law saying he didn’t think he “analyzed the law properly."

In stark contrast, the reaction from national and local black and white Democrat officials to last weekend’s horrific violence has been deafening silence. It’s the same silence and “see no evil” reaction they have had to the outrageous ambush and harassment of Turning Point’s Charlie Kirk and Candace Owens outside a Philadelphia restaurant Monday by so-called anti-fascist "antifa" loyalists thugs — the Democrat Party’s new “Brown Shirts.”

The latest shooting rampage comes two years after Emanuel proclaimed in November 2016 that “you are safe in Chicago, you are secure in Chicago… Chicago has in the past been a sanctuary city. ... It always will be a sanctuary city…”

He was talking about illegal immigrants who feared a Trump crackdown. He sure wasn’t talking to blacks on the South and West sides of the city. For them, there is no sanctuary from violence!

Emanuel’s response to the weekend of blood and death: “There is a shortage of values about what is right, what is wrong…”

This is the same Rahm Emanuel who said in 2012 regarding the Chick-fil-A restaurant chain coming to Chicago: “Chick-fil-A’s values are not Chicago values. They’re not respectful of our residents, our neighbors and our family.”

My question is if Chick-fil-A’s Judeo-Christian values are not Chicago’s values, what values is he referring to?

Don’t expect Reverend Sharpton, Chicago’s own Reverend Jesse Jackson, or black and white national, state, and local politicians to show up at any rally to protest the mayhem, mourn the dead and condemn the killers.

Why? Because the shooters and their victims were black.

Although the killers have not been identified, that is the prevailing thought given gang associations.

You can bet your boots that if these same black victims had been shot by a group of Charlottesville-like white supremacist marchers; or, if the protesters in Philadelphia had been wearing Trump hats and harassed a black couple, all hell would have broken loose.

Jackson, Sharpton, Black Lives Matter advocates, antifa, a scattering of entertainers and athletes as well as national and local politicians would have rushed in to protest the racist violence.

You would probably see several of the 2020 presidential wannabees knocking themselves over getting to the nearest microphone and camera.

As I have previously written, based on their actions and reactions, to many on the left and their political allies, a black life in Chicago, Baltimore, and elsewhere has more value and gets much more attention if taken by a white than if by another black.

Caldwell’s solution and recommendation: “President Trump should direct Attorney General Jeff Sessions and FBI Director Chris Wray to come up with a comprehensive action plan to end Chicago’s status as a war zone.

If the nation’s first black president Obama did not choose to do anything to deal with the genocide of blacks in his Democrat-controlled home town, maybe a white President Trump will.