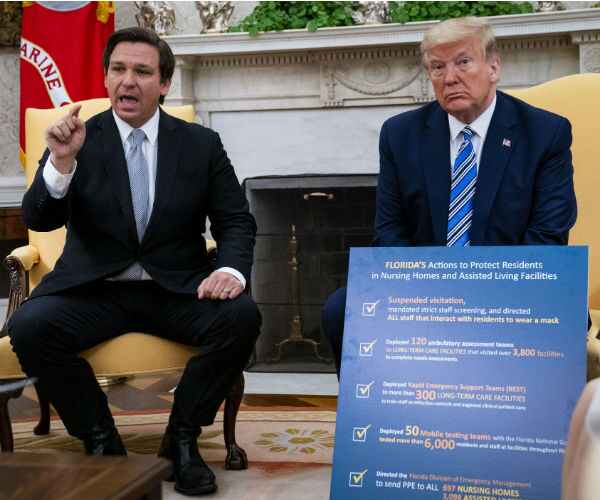 After being excoriated by Democrats and the media for being cautious and not ordering draconian state-wide lockdowns as have many other state Democratic governors, he debunked many media-driven doom and gloom predictions of the coronavirus pandemic's impacts on  Florida.

On April 29, the day after he met with President Trump regarding Florida’s progress in fighting COVID-19, he held a press conference to outline his "Safe, Smart, Step-by-Step" plan to re-open most of Florida.

He correctly declared, "Fear is our enemy. We need to focus on facts and not fear."

—The Washington Examiner: "Florida Could Be the Next New York in the Coronavirus Outbreak."

—FLAPOL: "Demographer Says Glorida Could Be 'Like an Uber-Italy' During Coronavirus Outbreak."

—The Orlando Sentinel: "Projections say the state could run out of ICU beds by April 14."

—Spectrum News’ Bay News 9 (Tampa Bay): "There will likely come a point when there will be no more ventilators to shuffle around, and when that happens, what's next?"

The preceding serve as excellent examples of fostering COVID-19 fear.

DeSantis promptly shot down this media hype with the latest data from Florida’s Department of Health and the Agency for Health Care Administration (ACHA).

He gave Floridians and the nation the real facts:

You have to look far and wide to find extensive coverage of these facts, which DeSantis laid out in detail with charts in a presentation that lasted nearly an hour.

Unfortunately, much of the media and many Democratic politicians rarely focus on the positive things happening in Florida (and other states) with pro-Trump governors like Greg Abbott of Texas.

Their preference seems to be media darling Democrats such as New York's Andrew Cuomo and California's Gavin Newsom.

Or, GOP governors like Mike DeWine of Ohio and Larry Hogan of Maryland, whose shutdown actions are similar to some of their Democratic colleagues.

The major media wants us to believe that it is concerned about the public and the COVID-19 virus. However, its apparent goal is to use whatever it can to attack the president and those governors, like DeSantis, whom he supports and who support him.

Many believe there are some Democratic leaders — and their allies in the press — who either want shutdowns to continue; or, if ended, result in subsequent waves of virus cases.

They believe that continued economic pain will allow them to defeat Trump — forget the nation and the people.

DeSantis is winning for Florida in the fight against COVID-19, though his critics don't dare admit it.

When he refused to follow the knee-jerk lead of some governors who immediately ordered state-wide lockdowns or refused requests of media critics, he was accused of doing "too little too late."

Now that he has released his plan to re-open the Sunshine State, you can bet that some critics will say he is "doing too much too soon."