Biden confuses a victory with a mandate 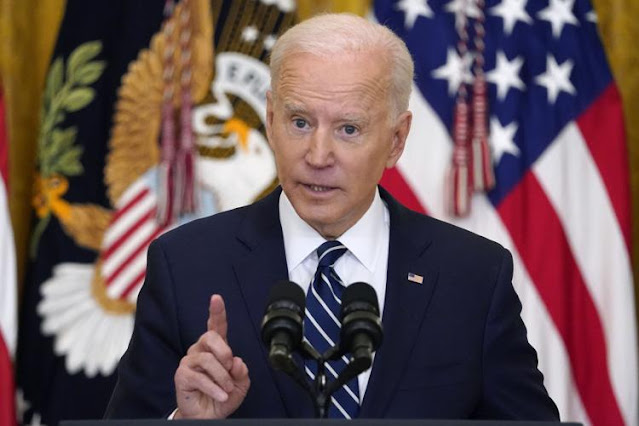 President Joe Biden speaks during a news conference in the East Room of the White House on Thursday, March 25, 2021, in Washington. - Evan Vucci / AP

“Today, people are taking their comedians seriously and the politicians as a joke.”

One of the most abused and misused terms by a recently elected president and his party is “a mandate.” As soon as the final points are on the board Election Eve, the winning candidate has a “mandate” to take over government and has unlimited power over the unsuspecting electorate.

Every election, we hear about “mandates” no matter by how large or small a margin of victory is. Our cat’s litter boxes have been lined with discarded newspaper headlines about stories regarding so-called election mandates for years. Winners always claim their victory was a mandate and the losers insist this is overreach. Yet most of these purports amount to nothing more than staking a claim to office. What value is a mandate except the right to brag? “I won and I am the new boss.”

In today’s political carnivals, it’s not uncommon for voters to say, “I didn’t like either guy so I voted for that guy since he was the lesser of two evils.” If someone wins an election by default since he is disliked less, how can he dare tell voters straight faced: “Now you decided I am the best candidate, I can begin filling my party’s wish list!”

“Hell, I never vote for, I always vote against.”

Political scientists agree, there is no such thing as a “mandate” no matter how large or how small the margin of victory is for the winner. Political pundits, parties, pollsters, campaigners, the media and especially politicians jockey numbers to distort election reality. They arbitrarily mix and match popular and electoral votes to determine how to spin the wimpiest of victories into a voter mandate.

One Western think-tank study on voter expectations before and after elections shows clearly that mandates are about “perceived power of the office.” Voters do not give presidents unlimited power when they put them in office. Yet many presidents and their parties are convinced they do. When presidents need to justify abusing the boundaries of their office, they claim they have a “mandate”.

Progressive Woodrow Wilson notoriously abused his executive power justifying he had a mandate to expand his authority over inferiors in Congress, and naive citizens. Wilson also believed he had a mandate to replace everyone in government with legal scholars. Critics labeled his arrogance as “condescending” BS.

“There is a very thin line between confidence and arrogance.”

Elected during the Depression, Franklin Roosevelt said voters gave him a “mandate” to pass his New Deal. His grandiose menu included something for everyone. He claimed expanding federalism was a voter mandate. Historians and scholars disagree. This was FDR’s mandate, not voters. And up to his untimely death, he never ended the Depression, which was the “voters mandate” not his.

One president used “the mandate” as an excuse for his failures. For four agonizing years, Jimmy Carter, elected by default after Watergate and Vietnam, placed greater emphasis on methods and procedures for making policy than on its content. When media and voters queried his failures, he’d respond, “I only do what I was elected to do within the size and scope of the mandate given to me.”

Ronald Reagan entered office by handily defeating Carter in 1980 with a mandate to repair the broken economy. In March 1981, when he was shot by John Hinckley, his job rating soared to 69%.

“Tell Nancy I forgot to duck! I’m just glad they were all Republicans today.”

But when voters became impatient with Reaganomics and the economy still floundered, his rating plummeted to 39% by 1983. Eventually, his job rating improved and he defeated Walter Mondale in the 1984 election. Reagan carried 49 states, and won 525 electoral votes out of 538, the most in American history. This was only possible because Reagan fulfilled the “voter’s mandate” – not his.

Reagan has consistently placed third in Gallup’s yearly survey that asks Americans who was our greatest president. In 1999, on his 90th birthday, he topped the list. Gallup asked them why they picked him number one that year. And the majority of them responded: “Because the voters gave him a mandate to fix the broken economy and to reduce unemployment and he did exactly that.”

Political polarization and finger pointing who is to blame frequently results in presidential mandate rhetoric to silence critics. This is especially true if they do not have a Congress that supports their agendas. George W. Bush was over-indulged with condemnation for the Iraq War and security polices by media demagogues after 9-11. He adamantly defended his actions, asserting that the American people gave him a mandate to avenge and prevent future terrorist attacks on U.S. soil.

Barack Obama was elected to end the Recession in 2008. But he used his “mandate” on a trillion dollar stimulus bill that created zero private-sector jobs. He federalized private health care, gave tax dollars to failed green energy, used IRS money to punish critics and blamed Benghazi on a video. Democrats fell from power when voters had the chance to totally negate Obama’s leftist mandate.

“Elections have consequences, and, in case there was any doubt, I won.”

Progressives remind us daily that Joe Biden got more votes than anyone in history. But they forget to mention it was due to blue states no-rules-barred mail-in voting. They also avoid reminding us that people turned out in record numbers to defeat Biden! And Donald Trump received the second highest vote total in history. Trump won every state that did not arbitrarily mail out ballots. And Biden only won by a wimpy 4%? Yet the left continues to boast voters gave Biden an undisputable mandate?

Hours after Joe Biden was declared the winner, House Speaker Nancy Pelosi proudly announced to America, “Voters have given President Biden an overwhelming mandate to lead, and showed their support for the Democrats' platform over Trump’s failed policies. And Joe Biden even got a bigger mandate than president Kennedy had. And we have a strong Democratic House to support him!”

Sweeping gains in one election have become so common that the idea of a mandate is ludicrous! But that does not faze politicians in contentious elections. Biden eked out a disputed victory over Trump, yet the left is crying mandate! They’re convinced America chose socialism over capitalism.

Skeptics now wonder how the left ever forgot that Biden was only a substitute for a real candidate.

Facts don’t matter to the left if they win, even if 50% of the people voted against them. This is no mandate. When presidents use mandate rhetoric to force party politics on voters and don’t govern for the entire nation, voters send them packing in a New York City minute next election. Voters will always put their survival over politics.

“Much of the social history of the western world, over the past three decades, has been a history of replacing what worked with what sounded good.”