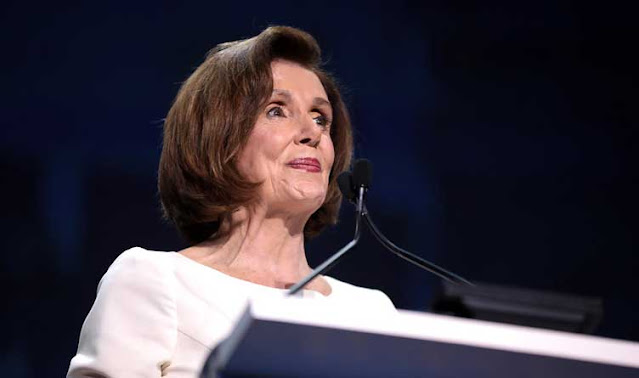 “Woke-ism, has distorted our history and has made a mockery out of Democracy.” —Mike Pompeo

Speaker Pelosi’s top priority is to turn America into a progressive one-party nation ruled by the far left. Her latest effort is HR 1. It trashes the U.S. Constitution and rigs the system to make it virtually impossible to elect a Republican president or Congressperson ever again. It’s an unconstitutional power grab. It is a blatant slap in the face of every voter in America and every independent state.

Our founders worried that an all-powerful central government would seize control of presidential and congressional elections utilizing unorthodox tactics like those included in HR 1. That is why they took the selection of federal officers totally out of the hands of the central government.

Article II, Sec. 1 of the U.S. Constitution clearly states that “only state legislatures have the power to determine how federal representatives are chosen.” There are no national rules. But Pelosi has no problem ignoring the Constitution to give her party total control over government and eliminate anyone from getting elected to federal office that does not support far left democratic socialism.

Twenty Republican state attorney generals have expressed grave concerns that HR1, the “For the People Act,” which barely passed the U.S. House last month is unconstitutional and is a violation of states’ rights. They have vowed to fight it all of the way to the U.S. Supreme Court if it passes.

Progressives in the Senate are vigorously trying to pass their form of HR 1, the For the People Act of 2021. They too plan to suppress the autonomy of our states to control their own elections. They are spreading propaganda much like Lenin did when he terrorized socialist Russia, to convince the people, that federalizing state elections, and violating their 10th Amendment rights is best for them.

It was once said that “all is fair in love and war and politics” and the Democrats have proven this. They know once people read between the lines of this unconstitutional monstrosity, they will demand that it is put out of its misery and sent to the legislative graveyard and buried 6 ft. under.

So the left has taken out prime time ads on local and national TV and cable networks to pitch this. These ads are being paid for by the Democratic Party and by corporate America—believe it or not.

There was a time not so long ago that American big business supported the GOP because they knew that, as government grows so does the amount of tax dollars it takes to support it. It was a simple matter of self-preservation to back the GOP and a smaller less regulated government. Then why are so many major U.S. companies turning “woke” and shooting themselves in both feet?

With the election of Barack Obama and the love affair that the media had with him, corporate America quickly found out; if they did not buy into this hype, it could hurt their sales and profits. They were also concerned, if they fell from grace with his administration he would pass anti-corporate legislation since he had campaigned to punish the rich and redistribute wealth.

Big business loved the policies of Donald Trump and the way he protected their interests at home and on the international stage with China and other nations. For the most part, they tried to remain out of the political arena and count their profits. But like all good things, that came to an end with the pandemic and they changed their stripes quicker than a flea can jump on a Tennessee hound.

As the 2020 general election unfolded it was clear that there was no way that progressives, socialists and the media would allow Trump to be reelected. And one by one U.S. companies fell prey to the identity politics of the left as they gathered groups like BLM, Antifa, professional sports unions and outspoken super star athletics into their anti-Trump and GOP election camps.

They saw the writing on the boardroom wall when Joe Biden eked out a victory over Donald Trump-- due to voter fraud in Democrat-controlled districts located in key battleground states. And today they are turning “woke” faster than Barack Obama can say, “Change!”

Top executives of some of the largest corporations on the world business stage released a collaborative statement Wednesday claiming that they support “democracy”–or what they conceive as democracy in today’s “woke world”–disregarding we are a Constitutional republic.

This is a generic statement that grew out of a “supposed summit” of over 100 CEOs, CBOs and other top executives that attended this meeting in person or by proxy. The summit was convened in response to the passage of Georgia’s updated election-integrity law and similar legislation in other states that only addresses fixing the issues of concern that transpired during the last election.

This was a collaborative corporate statement that was released as a paid ad which appeared in The New York Times, The Washington Post, The Wall Street Journal, and other publications.

This ad reveals their deceptive view of “woke democracy”:

“A government of the people, by the people. A beautifully American ideal, but a reality denied to many for much of this nation’s history. As Americans, we know that in our democracy we should not expect to agree on everything. However, regardless of our political affiliations, we believe the very foundation of our political process rests upon the ability of each of us to cast our ballots for the candidates of our choice.

For American democracy to work, we must ensure the right to vote for all of us. We should all feel a responsibility to defend the right to vote and to oppose any discriminatory legislation or measures that restrict or prevent any eligible voter from having an equal and fair opportunity to cast a ballot.

Voting is the lifeblood of democracy, and we call upon all Americans to join us in taking a nonpartisan stand for this most basic and fundamental right of all Americans.”

A total of 107 corporations were involved in this!

You will notice that the two most vocal companies that lobbied to have the Baseball All Star Game removed from Atlanta, Coke and Delta Airlines, did not sign on to this.

Now you are aware, if you are “un-woke,” you might want to think twice before you patronize any of these companies. It must be noted that even trying to avoid them might be near impossible, given the vastness of their entanglement in our daily lives.

How else can we fight back? The best way is with our votes when we have free and fair elections ensured by voter reform laws, such as the one enacted by Georgia.

“Wokeness is the product of censorship and political correctness and it all points in one direction— liberal authoritarianism, cloaked around moral righteousness.” —Mike Pompeo