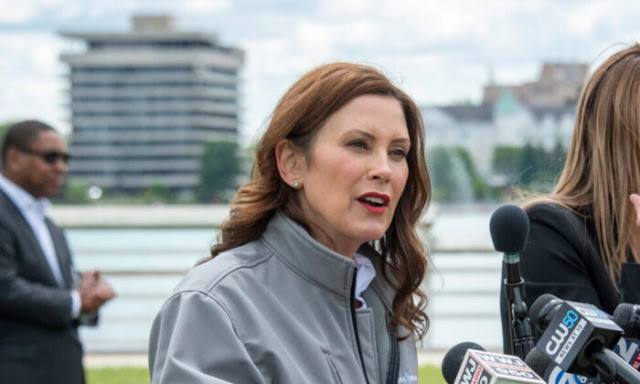 Michigan’s Senate on Thursday approved a petition that repeals Gov. Gretchen Whitmer’s emergency powers, with another approval expected by the state’s lower chamber.

The Michigan Senate’s 20-15 vote came two days after the Board of State Canvassers certified the petition, which was started by a group called Unlock Michigan that gathered over 340,000 signatures.

The board deadlocked 2-2 in April but voted 3-0 this time around.

The petition took aim at the 1945 Emergency Powers Act that enabled Whitmer to impose harsh restrictions on state residents during the COVID-19 pandemic.

Republicans on the Senate floor before the vote praised the petition and said it was needed to curb Whitmer’s power.

“This initiative represents a people’s veto of this governor and the unlimited power that she’s tried to claim during this pandemic,” state Sen. Tom Barrett, a Republican, told colleagues.

Democrats offered different explanations for their “no” votes.

State Sen. Mallory McMorrow, a Democrat, argued that the legislature is “a deliberatively slow moving body.”

“But when an emergency faces our state, we don’t have the luxury of time. That is what this legislature of the past put into place. And I could not in good conscience support or measure to remove those powers and put future residents at risk if the executive of the state does not have the ability to act quickly,” she said.

A Whitmer spokesperson did not respond to a request for comment.

A Michigan House of Representatives GOP spokesman told news outlets that the chamber will vote on the petition soon. If it does not within approximately one month, or if the vote fails, then voters will decide on whether to repeal the emergency powers law in the next election.

Republicans control both chambers of the legislature in Michigan.

If the House follows the Senate, then an emergency declaration will be good for 28 days before requiring the legislature’s approval to be extended.

The vote on Thursday came after a series of developments, including a ruling by the Michigan Supreme Court that the emergency powers law was unconstitutional. The court later ordered the Board of State Canvassers to certify the petition after the board deadlocked along party lines, with Republicans voting for and Democrats against, in April.

Unlock Michigan, meanwhile, received approval this week for a new petition that would limit emergency powers for the Michigan Department of Health. Unlock Michigan spokesperson Fred Wzolek told The Epoch Times that the petition was “another step to keep Whitmer from ruling by decree on her own.”

Steven Kovac contributed to this report.