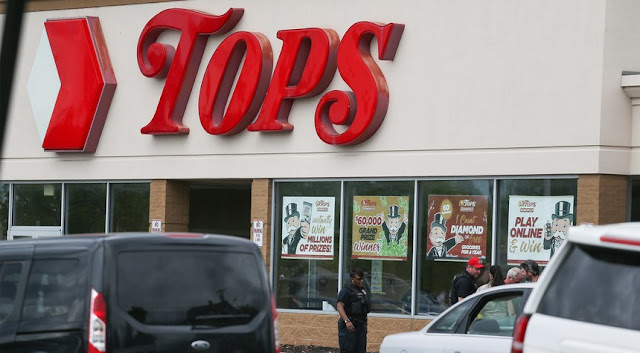 On Saturday afternoon, an 18-year-old from Upstate New York traveled to Buffalo and live-streamed himself shooting several people, ten of whom he killed, at a Tops Friendly Market in a predominantly black neighborhood. The suspect was captured by law enforcement and has been arraigned on 10 first-degree murder charges.

With their usual swiftness, leftists on Twitter quickly launched a seemingly coordinated effort to blame Fox News and Tucker Carlson for allegedly radicalizing the suspect.

As word of the shooting quickly spread on social media, so did reports that the shooter had posted a 180-page manifesto online, explaining his racist and anti-Semitic motives and detailing how he planned to carry out the attack. PJ Media obtained a copy of the manifesto, and while we cannot independently verify its authenticity, it is widely believed to be genuine, and some left-wing operatives are intent on claiming that the manifesto proves the shooter was radicalized by Fox News and right-wing politics. I’ll show you want the manifesto actually says (though I will not link to it).

First, despite the coordinated effort to blame Fox News, the manifesto attacks a number of news networks, including Fox, for hiring Jews.

A search of the entire manifesto also yields no mentions of Tucker Carlson and specifically mentions “the internet” as where he got his beliefs.


Others have tried to link the shooter in a more general way to right-wing politics. For example, the so-called conservative S.E. Cupp of CNN tried to blame “right-wing extremism” for the shooting.

But here’s what the manifesto says about the shooter’s politics:

Did you always hold these views?

When I was 12 I was deep into communist ideology, talk to anyone from my old highschool and ask about me and you will hear that. From age 15 to 18 however, I consistently moved farther to the right. On the political compass I fall in the mild-moderate authoritarian left category, and I would prefer to be called a populist.

So, the shooter describes himself as “authoritarian left-wing,” but the left and S.E. Cupp are trying to blame “right-wing extremism.” Okay?

Later in the manifest, the shooter insists, “I would prefer to call myself a populist. But you can call me an ethno-nationalist eco-fascist national socialist if you want, I wouldn’t disagree with you.” He also repeatedly attacks capitalists, and rejected the conservative label because, he wrote, “conservativism is corporatism in disguise, I want no part of it.”

But let’s not pretend that, assuming the manifesto is legitimate, the rhetoric espoused in its pages means the shooter cannot be legitimately aligned with either major political party or political movement. While I would argue that the views expressed in the manifesto echo rhetoric of radical leftism, the manifesto is full of nonsense and garbage that is at times inconsistent. The people who were quick to exploit the situation to attack Fox News and conservatives were wrong and should be ashamed of themselves.