We need a new contract with America 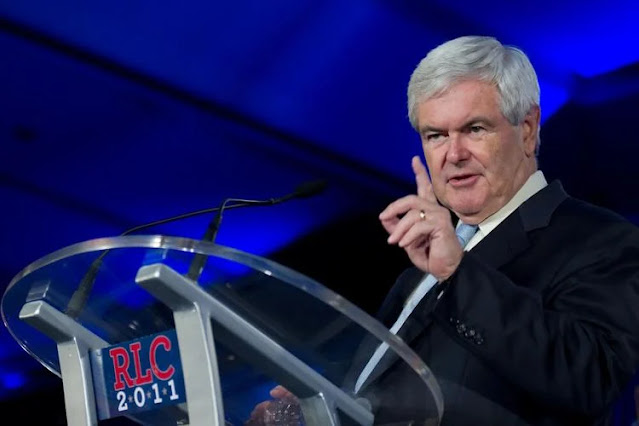 "Until someone is prepared to lay out the systemic problem, we will simply go through cycles of finding corruption, finding a scapegoat, and eliminating the scapegoat." – Newt Gingrich

Bill Clinton's first term is office marked the beginning of the Republican Revolution. His promise to reform health care was soundly defeated. His executive order lifting the ban against gays in the military failed to energize leftist activists. And a barrage of political and personal scandals plagued the Clintons during his first term. The most deleterious scandal was that Clinton illegally profited from a back door involvement in a failed savings and loan on the Whitewater River in Arkansas.
But none was more injurious to Clinton than the North American Free Trade Agreement (NAFTA).

NAFTA created a common market for goods, services and investments with Canada and Mexico. U.S. workers were forced to compete with global competition for jobs that hurt their standard of living and threatened their future. This ill-fated agreement angered the unions and labor friendly Democrats who needed union support. And America turned to the GOP to right the sinking ship.

Prior to 1994, Democrats controlled the House for 40 consecutive years, with a coalition of liberals in the north and east with southern blue-dogs. Since Democrats held the House for 58 of the last 62 years and the Senate for 34 out of 40 years, they had no fear of Republicans in the 1994 midterms.

According to University of Colorado's Paul Teske, both Bill and Hillary Clinton were easy campaign targets for the GOP. From Hillary Clinton's failed health care bill, to numerous corruption cases in Congress, and Bill Clinton's foray into NAFTA, America was ripe for the GOP revolution.

"Every revolution seems impossible at the beginning, and after it happens, it was inevitable." – Bill Ayers

It was obvious America needed a change. Liberal Democrats in the north and the good-ol-boy-left in the south had dictated Congressional policy for almost five decades – which wasn't working. They were about to be reminded that the "political pendulum always swings both ways if it is balanced."

The late senator Bob Dole reminded Republicans that they had been the minority in Congress for so long that they had forgotten how to take charge and govern. He said in order to win they needed a platform that had national appeal with universal solutions for all Americans, not just Republicans.
In an effort to unite Americans under a common goal, six weeks before the 1994 midterm elections, House Reps. Newt Gingrich and Dick Armey introduced a "Contract with America." As ballots were cast, this not only gave Republicans control of Congress, it would also save the Clinton presidency.

The Contract with America was a legislative agenda by the Republican Party for all of America. It detailed the actions the GOP promised to take – if they became the majority in the U.S. House for the first time in four decades. This was a true bipartisan effort to solve major problems confronting our nation.

"We are in a struggle over whether or not we are going to save America." – Newt Gingrich

The contract's text included eight reforms the GOP promised to enact, and 10 bills they committed to bring to floor if they took over the House. It included issues that had been polled during the first years of the Clinton administration that 60% of the American voters collectively wanted remedied.

The text of the proposed bills included in the Contract was released before the election. They represented significant changes in federal policy that included a balanced budget requirement, and tax cuts for businesses, families and seniors. It also included term limits, reforms to Social Security, and tort and welfare reform. It avoided controversial matters such as abortion and school prayer.

Gingrich purposely excluded how these bills and policies would be enacted and what they would cost. He did not want to distort his goals. He knew these issues concerned voters and they wanted them fixed. And if he didn't deliver it would cost him his job. He only wanted to impress voters that if the GOP took over Congress, they would make changes in government that all of America wanted.
Lou Cannon of the Washington Post wrote, "Democrats attacked the plan as extreme and radical and its solutions would make America worse." They claimed that a balanced budget, tax cuts and welfare reform would hurt the poor and do irreparable damage to institutions that had been in place for decades." Clinton confidant Vernon Jordan protested, "This contract is a 'hit job' on Americans!"

Although the liberal media and the polls minimized the importance of "The Contract with America", Election Day 1994 proved fatal for Democrats. According to Weekly Standard editor William Kristol, Gingrich was responsible for the "Republican Revolution," with the GOP easily taking control of the House and the Senate. They also won 12 governorships and took control in 20 state legislatures.

As predicted, many of the elements of Gingrich's "contract" that passed in Congress were vetoed by Clinton and the ones that he signed did not radically change America as the left had predicted. Although the proposed balanced budget Constitutional Amendment failed to pass, Newt Gingrich and the Republicans led the crusade to end 30 years of federal red ink and balanced the budget.

Joe Biden's regressive "contract for our nation" was to turn America into a progressive Shangri la, with no strings attached. He promised to redistribute wealth from the rich with punishing new taxes.

He vowed to stop drilling for oil, increase welfare, pay people not to work, and to open our borders.

"I promise that all increased spending on federal programs will be paid for by the rich." – Joe Biden
Last election, the liberal media convinced America to buy into Biden's "contract with America" and take out Donald Trump. We are now energy dependent on rogue nations with record high inflation, a broken supply chain, a labor shortage, and have security issues due to Biden's border policies.

Biden kept the terms of his contract, but "whose contract with America was better for Americans?"

Ancient Greek lawmaker Draco wrote, "The goal of all contracts is to deter bad behavior." The first rule of contract law is accountability by all parties involved. Newt Gingrich's "Contract with America" was written to reflect the goals and objectives for government that most Americans wanted and he pursued and accomplished many of them. His major achievement was a balanced federal budget.

We need a new contract for all Americans.

Is Biden's 'Success' Our Mess? 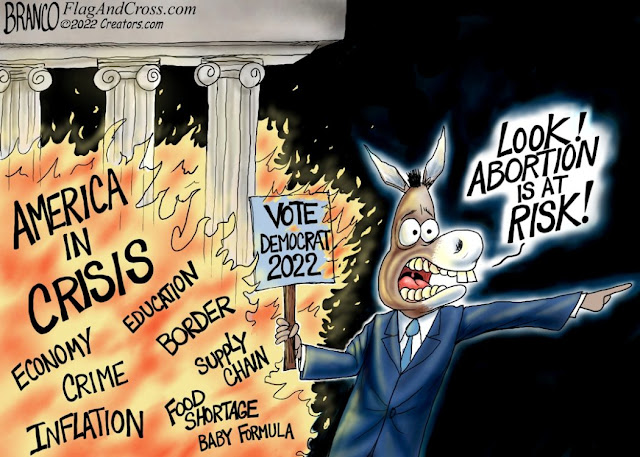 If an administration deliberately wished to cause havoc on the border, to ensure fuel was nearly unaffordable, to create a crime wave, to spark 1970s hyperinflation, and to rekindle racial tensions, what would it have done differently than what President Joe Biden has done?

So is Biden malicious, incompetent, or a wannabe left-wing ideologue?

When pressed about inflation and fuel price hikes, Biden either blames someone or something else, gets mad at the questioner, or claims former President Donald Trump did it.

His administration apparently believes things are going well and according to plan.

When polls disagree, his team either believes the American people are brainwashed or that they themselves have not supplied sufficient propaganda. So they never pivot or compromise, but rededicate themselves to continued failure.

Why? Apparently, what most in the country see as disasters, Biden envisions as success.

Take the border - or rather its disappearance.

Never in U.S. history has an administration simply canceled immigration laws, opened the border, and welcomed in millions of illegal aliens. All arrive illegally, and without audit, or vaccinations and tests in times of a pandemic.

Cartels now import lethal drugs at will into the United States. We have no idea how many terrorists walk across the border each day.

Almost all the entering millions who break the law are poor, without high school diplomas or English skills, and in dire need of massive federal and state housing, food, education, legal, and health subsidies.

Do the leftists in Washington believe that millions of dependent new residents will look to the Left for decades of support and soon find ways to reciprocate with fealty at the polls? Is that why Democrats brag in unapologetic tribalist fashion about changing the demography of the electorate?

In truth, the Left has always believed the only way to achieve their objectives of discouraging driving, forcing middle-class Americans onto trains and buses, and persuading them to live in urban high-rises rather than drive carbon-spewing cars from spacious suburban ranch-style homes was to encourage high fuel prices.

Is that agenda why Biden, during the current energy crisis, simply canceled new federal oil and gas leases? As diesel hits $7 a gallon in California, why else did he refuse to finish the Keystone XL pipeline or reopen Alaskan oil fields?

Inflation continues officially to exceed 8% per annum. Most consumers feel it is double that when they pay for food, fuel, building materials, houses, or rent - the essential stuff of life.

What did the Biden Administration expect would follow from keeping real interest rates at near zero, while printing trillions of dollars at the moment supplies were short and demand was spiking?

Or did it think inflation more fairly "spreads the wealth"? Does it prompt new necessary attacks on "corporate greed?" Does it demand more federal intervention and socialist policies?

If inflation is "bad" for most, it may not seem so to this left-wing administration.

Violent crime is on its way to 1970s levels. The combination of defunding the police, radical city and county prosecutors who don't charge or lock up criminals, and emptying jails and prisons have ignited a national crime wave.

Does it think it is more socially just to let criminals free than incarcerate them?

Does it buy into "critical legal theory" that laws do not reflect ancient ideas of right and wrong, but instead are "constructed" by the privileged to oppress the already oppressed?

Is what Americans see as dangerous crime something the Biden zealots applaud as tough social karma?

Americans are tired of the new woke tribalism. Judging individuals on the basis of their race, gender, or superficial appearance is amoral, and contrary to the entire civil rights movement, and the U.S. Constitution.

It destroys any idea of meritocracy and divides the country artificially into supposed victims and victimizers.

But do the Biden people see it that way?

Or do they promote racial tensions and tribalism, as welcome revolutionary fervor?

In that regard, the Bidenites promote identity politics as a good way to stir up the pot, to demonize supposed oppressors and deify the oppressed - all as a way of retaining political power. For the Left, living in a socialist nation controlled by an elite is far preferable to living in a free and prosperous one answerable only to the people.

The public believes the Biden Administration has failed America, with disastrous results due either to its incompetence, belligerence, or left-wing zealotry.

But Biden and his delusional team seem delighted with what they have wrought.

In sum, what Americans see as an abject catastrophe, they cheer on as a stunning and planned success.