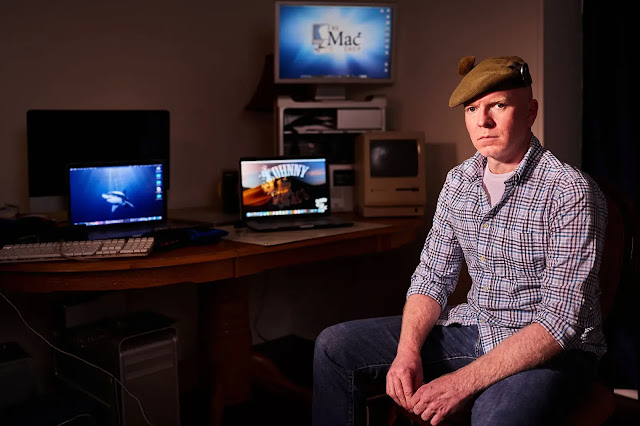 The former shop owner, John Paul Mac Isaac, decided to fight back after losing his business and being harassed for 18 months by Big Tech, the media and Delaware locals in President Biden’s home state.

“After fighting to reveal the truth, all I want now is for the rest of the country to know that there was a collective and orchestrated effort by social and mainstream media to block a real story with real consequences for the nation,” the 45-year-old Mac Isaac told The Post.

“This was collusion led by 51 former pillars in the intelligence community and backed by words and actions of a politically motivated DOJ and FBI,” he continued. “I want this lawsuit to reveal that collusion and more importantly, who gave the marching orders.”

Mac Isaac came to legally own the laptop after Biden’s son Hunter dropped it off at his store for repairs in April 2019 and never came back. The material on the laptop has raised serious questions about what Biden knew of his son’s overseas business deals, during which he and the president’s brother Jim Biden often invoked his powerful name.

When The Post’s first story broke in October 2020 — just three weeks before the presidential election — Twitter and Facebook moved to censor it. Then Schiff (D-Calif.) and 51 former intelligence officials labeled the laptop Russian disinformation.

In the aftermath, Mac Isaac says, his business and reputation were ruined.

“Twitter initially labeled my action hacking, so for the first day after my information was leaked, I was bombarded with hate mail and death threats revolving around the idea that I was a hacker, a thief and a criminal,” Mac Isaac said.

Schiff, who chairs the House Intelligence Committee, “has some explaining” to do, Mac Isaac insisted.

“Without any intel, the head of the intel committee decided to share with CNN and its viewers a complete and utter lie,” Mac Isaac said. “A lie issued in the protection of a preferred presidential candidate.”

Mac Isaac said he’s since endured false accusations of being a Russian spy and a “stooge” for Russian President Vladimir Putin.

“The fight to get to the bottom of who told everyone this was Russian disinformation is far more important for the nation than me clearing my name,” Mac Isaac said.

In the suit, which was filed in Montgomery County, Md., Mac Isaac claims Schiff defamed him in an interview on CNN two days after The Post began publishing revelations from the laptop.

In the interview with Wolf Blitzer, Schiff told the CNN host — without citing evidence — that he believed “the Kremlin” was behind a smear of Joe and Hunter Biden.

“Well, we know that this whole smear on Joe Biden comes from the Kremlin. That’s been clear for well over a year now that they’ve been pushing this false narrative about the vice president and his son,” Schiff told Blitzer, according to the suit.

Mac Isaac was forced to close his computer repair business near the Biden family homes in Greenville, Delaware, after people started throwing vegetables, eggs and dog excrement at his store. He went into exile in Colorado for a year.

The suit claims CNN knowingly broadcast the “false and defamatory story” that the laptop was linked to a Russian disinformation campaign, causing Mac Isaac significant damage, including the closing of his repair shop.

“CNN’s broadcast of the false statement accuses the Plaintiff of committing aninfamous crime, i.e., treason by working with the Russians to commit a crime against the United States of America by attempting to undermine American democracy and the 2020 Presidential election,” the suit states.

Similarly, Mac Isaac accuses the Daily Beast and Politico of peddling disinformation about the laptop in two articles published on both sites.

The Daily Beast claimed the laptop was “purloined” — which Mac Isaac says alleges that he stole the computer — in an article headlined “FBI Examining Hunter’s Laptop as Foreign Op, Contradicting Trump’s Intel Czar,” the suit states.

And in an infamous story on Politico, the website reported dozens of former intel officials believed the laptop to be “Russian disinfo.”

“The article was written by journalist Natasha Bertrand, who seemingly has a history of transforming speculation into fact in the stories upon which she reports,” the suit states.

His attorney Brian Della Rocca said Mac Isaac is seeking “at least $1 million in compensatory damages [and] punitive damages which will be the much bigger number and will be determined at trial.”

Mac Isaac has “suffered immensely at the false statements spread about those who brought the information on Hunter Biden’s laptop to everyone’s attention,” Della Rocca said.

“He has lost his business, friendships, and his honorable standing in his community,” the attorney continued. “This lawsuit is to attempt to repair a small portion of that damage caused by the defendants in the suit … We intend to show that their actions were intentionally malicious.”

Mac Isaac tried unsuccessfully to sue Twitter for defamation last year and was lumbered with the tech giant’s legal bills — an amount he says is roughly $175,000.

“[We are] honored to sponsor John Paul Mac Isaac in his fight against the injustice that has been done to him when the political elite coordinated with the leftist news media claiming the Hunter Biden laptop was Russian disinformation — which was a blatant lie,” the group said.

“The synchronized efforts of these parties to wield their words like weapons are evident through years long continuous coverage that led to extreme public backlash against JP and the closing of his business.”

Mac Isaac has penned a book about his ordeal — “American Injustice: My Battle to Expose the Truth” — which will be released in November.

The Post exclusively revealed the existence of Hunter Biden’s emails in a series of reports in October 2020 based on the contents of a damaged MacBook Pro laptop that was abandoned at Mac Isaac’s shop in the Biden family’s hometown of Wilmington, Delaware.

After downplaying the emails as unverified, both the New York Times and the Washington Post authenticated many of them — including some apparently being used in a federal probe of suspected tax fraud, money laundering and foreign lobbying violations by Hunter Biden.

Calls to Schiff, CNN, the Daily Beast and Politico were not immediately returned.