Stephanie Nash told 'Tucker Carlson Tonight' the government needs to stop telling farmers what to do.

A Tennessee farmer condemned the idea of forcing cows to wear masks and diapers to contain their methane emissions, saying the people who came up with the idea have "gone to loony town."

French dairy giant Danone announced in mid-January it is considering putting masks on cows to trap their burps in an effort to reduce methane emissions by 30% come 2030. In the future, cows could also be forced to wear diapers to trap their flatulence. 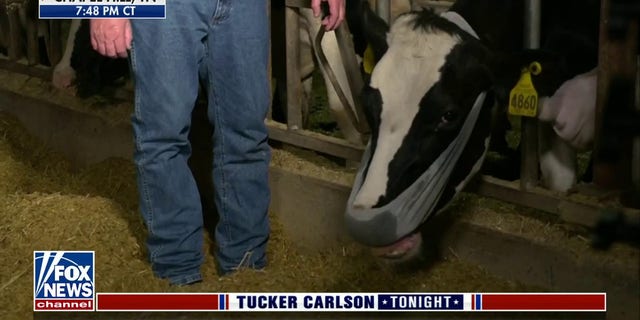 Nashville farmer Stephanie Nash demonstrates how cows react to being forced to wear a mask.

Nash put a mask on one of her cows during the interview to test the theory but explained "she's not having it" and is "struggling to breathe."

Livestock, especially cows and cattle, produce methane, a dangerous greenhouse gas that warms the atmosphere, as part of their normal digestive process, according to the Environmental Protection Agency.

"We have ruminants on our farm that can digest byproducts. A good example is we feed our cows soybean meal that comes from soy oil production," she explained.

"And you have to ask yourself, millions of tons per year – if we don't have cows to digest that byproduct, it has to go somewhere. It has to go to a landfill. It has to go on, you know, into a waste management. And that's going to be very harmful. That's going to leave an imprint, you know, for our country and gases going into our environment."

Carlson asked if putting a diaper on a cow would even be feasible and wondered if the whole thing was a joke.

"I think these people have gone to loony town. There's no possible way that I'm going to put a diaper on my cow," she stated.

The Chapel Hill farmer said her cows have to be able to walk around, lay down, eat and drink water and generally live a comfortable life.