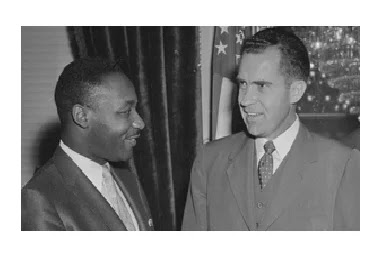 Grand Old Partisan reminds us today of Dr. Martin Luther King Jr.’s meeting with Vice President Richard Nixon in 1957. They met on Capitol Hill for a discussion of ways to overcome Democrat opposition to the Republican civil rights agenda.

That’s something that you won’t hear about today from the leftie media.

Republicans led the charge on civil rights and women’s rights.

This list was originally compiled by Michael Zak at Grand Old Partisan and then posted at Free Republic .

[CLICK HERE TO READ THE REST OF THIS ENLIGHTENING ARTICLE THAT HAS AN EXTENSIVE TIMELINE.]