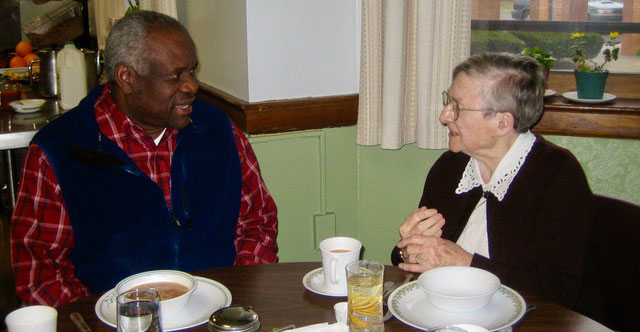 Supreme Court Justice Clarence Thomas is hailed by many for his inspiring life. But through it all, good or bad, Thomas stays focused on the important things in life.

He never has forgotten those who helped him along the way. For many years on Martin Luther King Jr. Day, the justice would visit his eighth-grade teacher, Sister Mary Virgilius Reidy, and dozens of her fellow nuns, in a retirement convent in New Jersey.

Clarence Thomas was born into abject poverty in the segregated Deep South to parents who were poor and uneducated. His father left when he was 2, and he ultimately was sent to live with his grandparents in Savannah, Georgia.

His grandfather enrolled Clarence and his brother in St. Benedict’s, a segregated, all-black, Catholic elementary school. It was run by the Missionary Franciscan Sisters of the Immaculate Conception (most of them from Ireland), who endured disparaging slurs, including the N-word, for dedicating their lives to teaching black students.

“They wore that as a badge of honor,” Thomas recalls in the book “Created Equal: Clarence Thomas in His Own Words,” which I co-edited with Michael Pack.

The Franciscan nuns changed his life, and Thomas always has been grateful for their love and support. The nuns held their students to the highest academic standards, and did not allow them to make any excuse, even though these students lived under state-enforced discrimination.

As Thomas recounts in “Created Equal”: “You knew they loved you. When you think somebody loves you and deeply cares about your interests, somehow they can get you to do hard things.”

In the 1980s, when he was part of the Reagan administration, Thomas sought out Sister Virgilius, who was living in Boston. Thomas recalls: “I went by to see her, and I sat with her, and I thanked her for teaching me and making me believe that we could learn, and for not letting me slip into victim status and forcing me out of it.”

In 1984, Thomas returned to his hometown of Savannah to pay tribute at an event honoring the Franciscan Sisters, where he said:

There was no way I could have survived if it had not been for the nuns—our nuns, who made me pray when I didn’t want to and didn’t know why I should—who made me work when I saw no reason to—who made me believe in the equality of races when our country paid lip service to equality and our church tolerated inequality—who made me accept responsibilities for my own life when I looked for excuses. No, my friends, without our nuns, I would not have made it to square one.

Thomas again thanked the nuns when he was nominated by President George H.W. Bush to the Supreme Court in 1991, and Sister Virgilius, then 80 years old and nursing a broken arm, later testified on behalf of her former student at his confirmation hearings.

After Thomas joined the Supreme Court, for many years on Martin Luther King Jr. Day, we would leave his home around 6 a.m. and drive up to Tenafly, New Jersey, to spend the day with Sister Virgilius and her fellow sisters, many of whom also taught Thomas and others at St. Benedict’s.

We had lunch in the cafeteria with all the nuns, and Thomas’ face displayed such joy as he reminisced about those days and caught up on how the nuns were all doing. He would visit sisters who were bedridden in the infirmary.

When Sister Virgilius passed away in 2013 at age 100, we attended her funeral together.

In October 2021, many celebrated Thomas’ 30th anniversary on the Supreme Court and his influence on American law, including a daylong celebration at The Heritage Foundation with remarks by the justice himself. But Thomas was more focused on an event earlier that week: the blessing of a statue of Sister Virgilius and two students at a cemetery where 200 Franciscan sisters are buried.

On a beautiful October day, in a small, private ceremony attended by more than 20 nuns, many of whom were in their 80s, along with friends and family members, Thomas greeted all of them with hugs and smiles.

When he made his brief remarks, Thomas fought through tears to thank the nuns who changed his life. It was a beautiful moment that captured his humility.

“This extraordinary statue is dedicated to you sisters—to all of you who have given so much and who have asked for so little,” he said.

As Martin Luther King Jr. Day comes around every year, I always think of how these nuns changed the course of Clarence Thomas’ life, and how this great man, our nation’s greatest Supreme Court justice, always found time to honor those who helped him under the most difficult of circumstances.