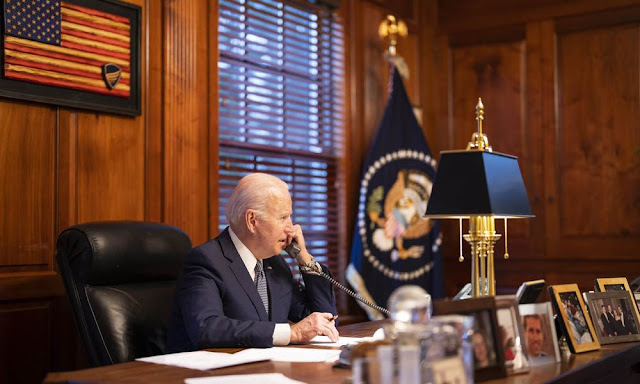 As Townhall reported on Wednesday evening, it was discovered that President Biden had not just one set of classified government documents that were mishandled, but two. So much for the guy who claims he takes sensitive materials "seriously" and attacked Trump as being "irresponsible" for doing what Biden also did.

According to the White House Counsel's Office, the official legal team is "fully cooperating with the National Archives and the Department of Justice" in order "to ensure that any Obama-Biden Administration records are appropriately in possession of the Archives." Never mind, apparently, that such a review maybe should have been done in 2017 and not in 2023 to ensure Biden didn't have classified government documents floating around the east coast.

"The President's lawyers have searched the President's Wilmington and Rehoboth Beach, Delaware, residences – the other locations where files from his Vice-Presidential office might have been shipped in the course of the 2017 transition," the WH Counsel's office explained in their too-late attempt to ensure compliance with the Presidential Records Act.

After Biden lawyers' review that wrapped up on Wednesday night — somehow happening months after the first batch of documents were found in the then-former Vice President's Penn Biden Center office on November 2 — they announced what they found. (Hint: it's more mishandled classified documents).

The White House Counsel's Office explained that Biden lawyers "discovered among personal and political papers a small number of additional Obama-Biden Administration records with classified markings" and "all but one of these documents were found in storage space in the President's Wilmington residence garage." Another document was found "among stored materials in an adjacent room" while Biden's lawyers reported that no documents were found at Biden's other house in Rehoboth Beach.

The Counsel's office said that "the Department of Justice was immediately notified" of the suddenly discovered second batch of classified documents and arrangements were made for the Justice Department to take possession of the mishandled documents.

But "immediately" isn't an accurate term here. The first documents were found on November 2, and the DOJ nor Biden disclosed that fact until it was reported months later, conveniently after the midterms. And, given all the documents being found now were improperly taken by Biden when he left the vice president's office in 2017 and not magically discovered until roughly six years later, we still don't know where those documents traveled before finding their way into Biden's garage and UPenn office, nor do we know what information is in the documents, or how many more there may be out there.

When asked about the second batch of classified materials being found in his Delaware garage on Thursday morning, Biden explained that his "Corvette is in a locked garage" (um, ok) and that he "immediately" cooperated with the National Archives and DOJ.

Again, this "immediate" talking point is complete bunk. Nothing about Biden's handling of classified documents is "immediate." Biden and his administration have not been forthcoming about his possession of sensitive government documents, they refused to disclose the first tranche and are now pretending that the second is no big deal either.

Biden did not comply with the Presidential Records Act when he left office in 2017. He did not return documents for years. When he was caught mishandling classified documents he and his DOJ kept that fact hidden. And now they're trying to claim they played the situation by the book. But they didn't. A fruit of the poisonous tree-like argument requires this all to be viewed as shady. Biden did not follow the law initially, and now the rest of his claims are deeply flawed.