Kevin McCarthy Elected Speaker of the House on 15th Ballot 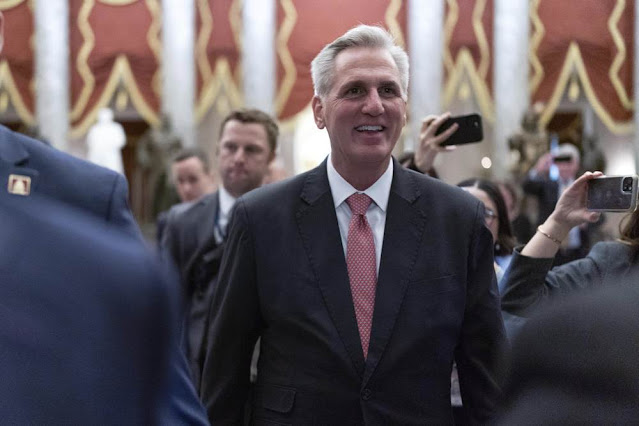 Following a more-chaotic-than-usual conclusion to voting on the 14th failed ballot Friday night, the House of Representatives finally elected House GOP Leader Kevin McCarthy as Speaker of the House on the 15th ballot in the early morning hours just before 1:00 a.m. on Saturday.

For McCarthy to finally win, GOP leadership convinced enough holdout members to change their votes to "present" for the 15th ballot after the 14th round failed.

As Friday night turned into Saturday morning, things were tense on the House floor, and Republicans ended up appearing to restrain their own from attacking fellow Republicans after the 14th vote didn't clinch McCarthy's bid for House Speaker — contrary to McCarthy's stated belief that he had the votes.

The decision for most of the anti-McCarthy contingent to abandon their resistance earlier on Friday came after a morning meeting of the Republican Conference in which additional concessions were made to address the concerns of those opposing McCarthy's speakership bid. The deal that resulted — or at least the framework for how the House would run in the 118th Congress — was enough to swing almost all of the holdouts into McCarthy's column.

Among the concessions that McCarthy made during the week of negotiations are:

McCarthy's victory early on Saturday morning, however, does not mean his work is over. The divisions that were seen between fellow Republican members this week suggests that there will be many more battles ahead for McCarthy and his leadership team to keep the Republican Conference together and able to pass its legislative agenda and successfully push back against the Democrat-controlled Senate and Biden administration.