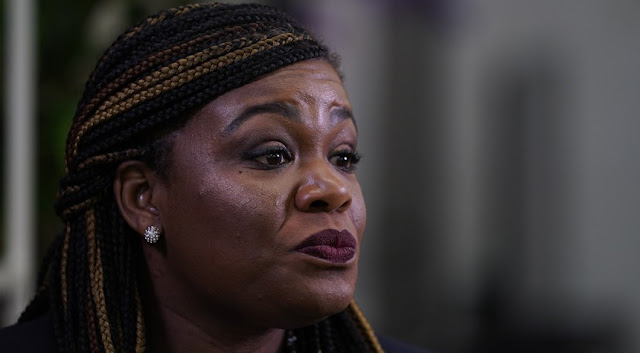 On Wednesday afternoon, Rep. Chip Roy (R-TX) nominated Rep. Byron Donalds (R-FL) to be the Speaker of the House. With Democrats having been unified in nominating and voting for Rep. Hakeem Jeffries (D-NY), that means two black men have been nominated for the role. According to "Squad" member Rep. Cori Bush (D-MO), however, only one of those nominations is historic and worth celebrating. Bush even tagged Donalds in her tweet in making clear what she thinks of him, "a prop," whose nomination is "pathetic."

is not a historic candidate for Speaker. He is a prop. Despite being Black, he supports a policy agenda intent on upholding and perpetuating white supremacy.

His name being in the mix is not progress—it’s pathetic.

Without evidence, the "Squad" member also claimed that Donalds "supports a policy agenda intent on upholding and perpetuating white supremacy."

Bush was quickly called out over Twitter. In approximately an hours' time, there were nearly 3,000 replies calling her out, many pointing to the racist nature of her tweet. There were also approximately 700 quoted retweets doing the same.

Democratic members had shown their disdain for Donalds from the House floor when Roy first nominated him earlier, despite not seeming to mind how Roy made mention of the historic nature of Jeffries also being nominated when it comes to how "for the first time in history there have been two black Americans placed in the nomination for Speaker of the House."

Roy went on to say that "we do not seek to judge people by the color of their skin, but rather by the content of their character," during which Democratic members could be heard audibly laughing and groaning at such a quote from the Reverend Martin Luther King Jr. They remained sitting while Republican members applauded and gave a standing ovation.

While nominating Donalds in the sixth round, Rep. Scott Perry (R-PA) reminded that the first black members were Republicans, as was Frederick Douglass.

"Byron Donalds," "Frederick Douglass," and "Scott Perry" are trending on Twitter, with "Chip Roy" having been trending throughout the day.

The support for Rep. Kevin McCarthy (R-CA), if anything, has gone down. He received 203 votes on the first and second round, and received 202 on the third round of ballots. On the fourth and fifth rounds, he received 201 votes, as a former supporter, Rep. Victoria Spartz (R-IN), voted "present."

In opposing McCarthy, Rep. Roy has made clear that it's not about one person, but rather the need for change, so as to change the institution and to do something other than the status quo. "The argument that I would make is that they want a new face, new vision, new leadership," Roy said about the American people in his nomination speech.