On Tuesday, Ron DeSantis was sworn in for a second term as Florida’s governor. While there was much to cheer throughout the speech (PJM’s Jeff Reynolds has more here), one line stood out in particular.

Calling Florida a “promised land of sanity” in a sea of cities being destroyed by woke ideology, DeSantis noted that “Many of these cities and states have embraced faddish ideology at the expense of enduring principles. They have harmed public safety by coddling criminals and attacking law enforcement. They have imposed unreasonable burdens on taxpayers to finance unfathomable levels of public spending. They have harmed education by subordinating the interests of students and parents to partisan interest groups.”

“They have imposed medical authoritarianism in the guise of pandemic mandates and restrictions that lack a scientific basis. [applause] This bizarre, but prevalent, ideology that permeates these policy measures purports to act in the name of justice for the marginalized, but it frowns upon American institutions, it rejects merit and achievement, and it advocates identity essentialism,” said DeSantis.

The crowd went wild when he declared: “We reject this woke ideology! We seek normalcy, not philosophical lunacy! We will not allow reality, facts, and truth to become optional. We will never surrender to the woke mob. Florida is where woke goes to die!”

The applause began before DeSantis could get halfway through that passage and culminated in a standing ovation from the enthusiastic crowd.

A line that struck a similar note also received a standing ovation: “We must ensure school systems are responsive to parents and to students, not partisan interest groups, and we must ensure that our institutions of higher learning are focused on academic excellence and the pursuit of truth, not the imposition of trendy ideology,” the governor said. “Florida must always be a great place to raise a family — we will enact more family-friendly policies to make it easier to raise children and we will defend our children against those who seek to rob them of their innocence.”

DeSantis has his pulse on the base of the Republican Party. Rather than sitting back and letting the left destroy his state, he’s been the most aggressive, successful governor in the country, battling back the forces of evil that seek to entrap our children into a life of pain, misery, and dysfunction. But the applause lines in this speech are more than just partisan talking points aimed to stir up the base. As we saw in Virginia, where Glenn Younkin became governor after focusing on kitchen-table issues — namely protecting our children from harm — and in Florida, where DeSantis won by nearly 20 points (including winning with independents, Hispanics, and women) there’s nothing that animates voters more than fear that their children are in danger. DeSantis, as a husband and father, understands that at a gut level, and it’s a winning message for 2024 should he decide to run for president.

Ron DeSantis' Inauguration Ceremony Unlike Anything in Recent Florida History 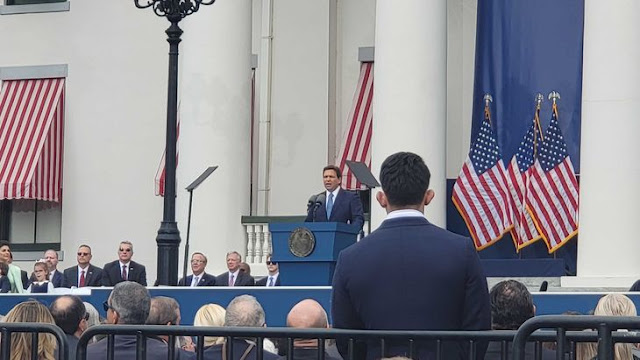 On Tuesday, Jan. 3, Republican Ron DeSantis was sworn in for the second time as Florida Governor. The inauguration, which also included swearing-in ceremonies for Lieutenant Governor, Attorney General, CFO, and Commissioner of Agriculture, had the feel of something much bigger. The ceremony included the 13th Army Band of the Florida National Guard, an artillery salute, and a fighter jet flyover. First Lady Casey DeSantis wore a gown with a cape and gloves, and gave off a Jackie O vibe. DeSantis delivered a speech that highlighted his first-term record of policy achievements, while laying out an aggressive second-term agenda that touched on everything from ending wokeness at public universities to fighting back against overreach from the federal government to calling out the Davos crowd.

“Florida is where woke goes to die!” DeSantis roared. The crowd roared back.

Several insiders in the press corral said they had never seen anything like it, likening it more to a presidential inauguration than a gubernatorial ceremony. 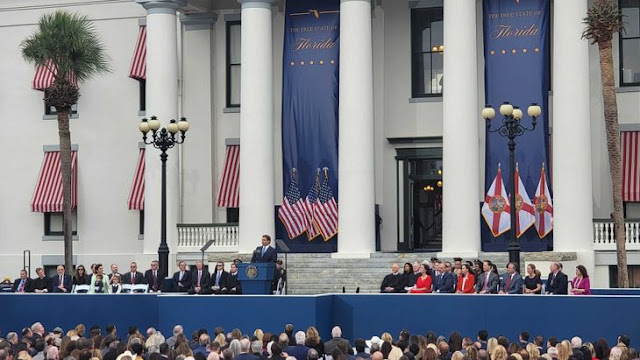 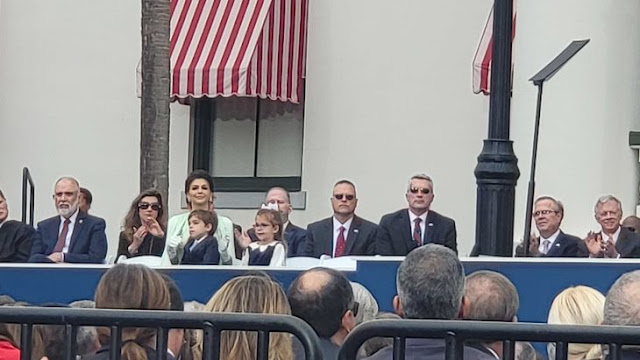 Bleachers on both sides of the steps of the historic Capitol Building in Tallahassee contained a crowd of what looked like a couple of thousand attendees. U.S. and Florida flags were everywhere. The production value of the ceremony was evident in the tight security, the numerous satellite trucks, and the professional camera work; fixed cameras, crane shots, even drones were deployed.

The highlight of the opening of the ceremony was a 21-shot artillery salute from the National Guard building a block away, followed by a fighter jet flyover.

DeSantis began his acceptance speech with the now-familiar declaration, “Freedom lives here in our great Sunshine State of Florida!”

He acknowledged the large numbers of new residents of the state, saying, “It [freedom] lives in the dreams of the historic number of families who have moved from states across this country because they saw Florida as the land of liberty and the land of sanity.”

That got some applause.

“Over the past few years,” he continued, “as so many states in our country grinded their citizens down, we in Florida lifted our people up. When other states consigned their people’s freedom to the dust bin, Florida stood strongly as freedom’s linchpin. When the world lost its mind, when common sense suddenly became an uncommon virtue, Florida was a refuge of sanity, a citadel of freedom for our fellow Americans and even for people around the world. In captaining the ship of state, we choose to navigate the boisterous sea of liberty, rather than cower in the calm docks of despotism.”

A short time later, DeSantis reminded the crowd that he refused to govern by polls and put his finger in the wind, saying, “Leaders do not follow, they lead!”

Then he laid out his second-term agenda. Noting the record budget surplus from the last state budget, DeSantis promised record tax relief in the coming legislative session. He set a marker for public education, vowing to make school districts more responsive to students and parents, and not special interest groups. He then said the same thing about higher education, promising to rededicate it to the pursuit of knowledge and truth, not “trendy ideologies.”

“We will protect our children against those who seek to rob them of their innocence,” he pronounced. That declaration earned a sustained standing ovation.

He restated his support for law enforcement and his dedication to conservation of natural resources. Then he launched into a review of insane blue state policies regarding the pandemic and social justice, saying, “We seek normalcy, not philosophical lunacy! We will not allow reality, facts, and truth to become optional! We will never surrender to the woke mob! Florida is where woke goes to die!”

Then DeSantis laced into the federal government, calling out the Biden administration for its inflationary spending, broken law enforcement strategy, insane border policies, and the weaponization of the government against the people. “This has caused some to be pessimistic about our future,” he said, “and some even say that failure is inevitable. Florida is proof positive that We The People are not destined to failure! Decline is a choice. Success is attainable. Freedom is worth fighting for!”

At this point, DeSantis called out the enemies of freedom: entrenched bureaucrats in Washington, D.C.; jet setters in Davos; and corporations wielding public power.

“Jet-setters in Davos” refers, of course, to the World Economic Forum, which seeks the Great Reset of the global order.

DeSantis wrapped up by saying that it is Florida’s responsibility to carry the torch of freedom and light the way for the rest of the nation.

The crowd left with a sense that this was much more than a gubernatorial inauguration.