Climate Change, the Greatest Issue of the 21st Century

Political satirists can use one cartoon to send a message more powerfully than a thousand words. 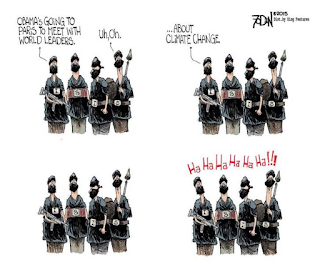 Posted on November 27, 2015 by John Hinderaker in Climate
Climate Change, the Greatest Issue of the 21st Century

Yeah, right. With the latest U.N. confab scheduled to begin in Paris on Monday, global warming hysteria is being hyped by governments around the world. Reality, though, tends to intrude, as it did in Paris just a week or two ago. Between bullets and bombs on one hand, and the theoretical prospect of a one degree increase in average world temperatures on the other, which would bring us closer to the mean over the last 10,000 years, most people don’t hesitate. Michael Ramirez illustrates the point. Click to enlarge: 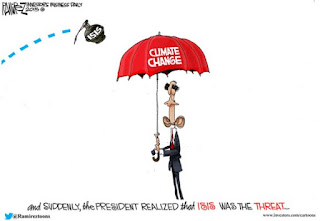 Most people understand that government exists to protect us from the actions of criminals and mass murderers like today’s Islamic extremists, not to try (futilely) to fine-tune the weather. Thus, no one expects anything from next week’s Paris conclave other than the enrichment of activists with seemingly unlimited access to government money.