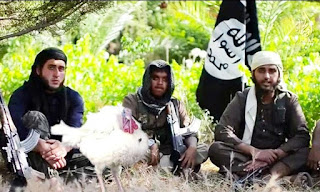 Popcorn the Turkey, now calling himself Babakurn al-Turki, was pardoned from the dinner table only yesterday by President Obama in a public ceremony at the White House. Normally the pardoned bird is sent along with its competitor to live out its remaining days at Morven Park’s Turkey Hill in Leesburg, Virginia.

However, U.S. officials have now admitted that al-Turki instead hijacked an Osprey out of Andrews Air Force Base in nearby Maryland and flew like a bat out of hell to Syria.

A group of senior intelligence officials and ornithologists with birds-eye surveillance of the war-torn country have suggested he is nesting in Raqqah or across the northern border in another neighboring country.

Al-Turki, who was originally raised as an animist before converting to Islam, has already appeared in several propaganda clips and tweets for ISIS, gobbling anti-American rhetoric and leaving furious American officials grousing. 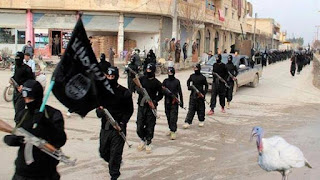 Trey Nahas, a counter-terrorism expert at the Rand Corporation, explained that al-Turki’s defection violated the cardinal rule for anyone receiving a presidential pardon, namely not to commit any further crimes.

Nahas said it was unclear if al-Turki, raised in a bubble of protected affluence in Oakwood, Ohio, became radicalized on internet forums like countless other disaffected foreigners who have flocked to ISIS, or later during his detention in the controversial poultry farm at Guantanamo Bay.

In either case, according to Nahas, the end result was the same: “the U.S. not only released a dangerous terrorist back into the wild, but it has also given ISIS something to crow about on social media.”

Calling it the classic case of the chickens come home to roast, FBI Director James Comey has admitted that al-Turki was already a known flight risk when he received his pardon. He had several suspected handlers known to support radical Islam and ISIS, although al-Turki managed to duck any formal charges.

Comey added that the FBI has launched its own investigation into the government’s handling of al-Turki prior to his release, saying it may be the canary in the coal mine for future detainee defections. However, several investigators privately told Duffel Blog that the findings would be delayed until after Black Friday to avoid ruffling the feathers of any major retailers.

While Comey said U.S. intelligence was still unsure where exactly al-Turki now stood in the ISIS pecking order, he insisted that the turkey would ultimately be more of a burden than an asset to the group.

“He’s too high profile now to operate anywhere clandestinely, he’s always going to be an albatross around their neck,” Comey explained. “I’m not exaggerating when I say his goose is cooked.” 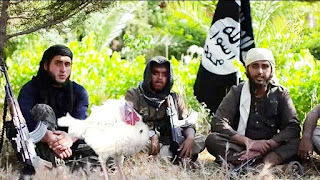 Some critics find that hard to swallow.

Rep. Tammy Duckworth (D-IL) of the House Armed Services Committee has already demanded to know “which birdbrain in the Secret Service” allowed such a dangerous avian to be that close to the president, and said that image “should give all of us goosebumps.”

The Wall Street Journal published its own editorial complaining that Al-Turki’s defection is “just one more feather in the cap of ISIS. Not only did this bird strut around the White House like he was cock of the walk, but as soon as he’s pardoned he flies the coop to join ISIS of all groups. What was our lame duck president thinking?”

Ironically, some news reports are circulating that, after being accused by ISIS of being a double-agent for the Mossad or CIA, al-Turki may end up getting beheaded anyway.