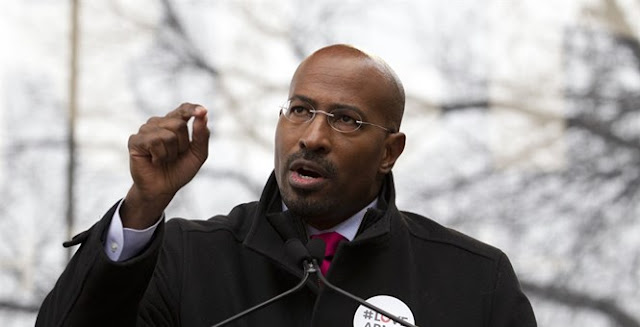 They find themselves with an unlikely ally in the effort - CNN's Van Jones.

Jones was the first to admit the "surreal" experience of sitting across from President Trump at the White House after "beating up" on him for so long. Still, he agreed with everything the president said at the prison reform summit, he told CNN Monday.
"On this issue he has been tough," Jones said of Trump.

Included in Trump's proposal are steps to improve conditions for women in prison, to offer prisoners more privileges, and to smooth the process of releasing prisoners back into society.

"Prison reform is an issue that unites people from across our political spectrum," Trump said. "It’s an amazing thing. Our whole nation benefits if former inmates are able to re-enter our society adds productive, law-abiding citizens."

Trump showed a compassion for prisoners "the most liberal Democrat would have agreed with," Jones noted.

He said this despite being teased a bit by Trump during the president's prepared remarks.

The Problem Solvers Caucus, a bipartisan group of 48 lawmakers, has endorsed the prison plan.

How great would it be if on this issue, they could work together to "help the least of these," Jones asked during his CNN appearance.

"Send a bill to my desk," Trump told his audience on Friday. "I will sign it."

https://townhall.com/tipsheet/cortneyobrien/2018/05/21/why-van-jones-was-at-the-white-house-n2482776?utm_source=thdailypm&utm_medium=email&utm_campaign=nl_pm&newsletterad=
Posted by Frances Rice at 11:30 AM