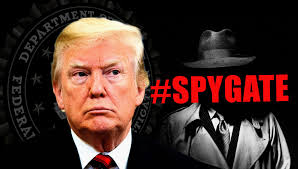 A majority of 51 percent of voters now believe “senior law enforcement officials are likely to have broken the law in an effort to prevent Trump from winning the presidency,” according to a poll from Rasmussen Reports.
Only 42 percent of voters believe it is “unlikely that these officials illegally attempted to stop a Trump presidency.”

In other words, we now live in a country where only 42 percent of voters believe it is “unlikely” federal law enforcement officials tried to illegally meddle in a presidential election.

Only 26 percent believe it is “not at all likely.”

In this poll of 1,000 likely voters, which was taken just prior to the Memorial Day weekend, Rasmussen also found that public opinion — despite the establishment media’s dishonest efforts — is steadily moving against federal law enforcement since this poll was last taken in February.

Even Democrats are becoming more convinced. Nearly a third of Democrats, 29 percent, “believe these officials are Very Likely to have broken the law.” That is up from 22 percent in February.

The only group that slipped on the “very likely” question, were unaffiliated voters, who went from 29 percent to 25 percent. Nevertheless, a  unaffiliated almost even split on the question. a Full 45 percent believe it is “very” or “somewhat likely” the feds broke the law in pursuit of Trump, 46 percent disagree.

The reasons for this movement in public opinion should be obvious to anyone who has paid attention to the cascade of revelations that have come down about the Obama administration’s counter-intelligence operation against Donald Trump’s 2016 presidential campaign.

As the New York Times reported, through director James Comey’s FBI, the Obama administration infiltrated Trump’s campaign with spies, who spread misinformation.
This is on top of what we already knew about the wiretaps, the FISA warrants obtained with lies, the unmasking, a hoax-dossier paid for by Democrats using misinformation gathered by a foreign former-spy  from Kremlin officials, and countless campaigns of disinformation perpetrated against the American people through illegal media leaks.

As if all of this is not bad enough, there is the constant stonewalling from the Department of Justice (DOJ) when it comes to congressional oversight. The DOJ refuses to release documents crucial to oversight.
The DOJ has also been caught lying on a number of occasions, including the timing of the Obama White House’s spying operation against Trump.

Originally, we were told the operation was opened after a low-level Trump campaign aide, George Papadoplous, bragged about knowing the Russians were in possession of Hillary Clinton’s emails.

We now know this is almost certainly untrue. It now appears as though it was one of the Obama administration’s spies, Stefan Halper,  who told Papadaolous this false information — which would mean Obama’s spying on the Trump campaign not only began much sooner, but that it was Obama’s Deep State that manipulated events to create the very event we are told justified the investigation.

This poll is also yet another piece of proof, on a ever-growing pile,  proving the establishment media have lost all of their moral authority, and by extension, their most precious commodity — the ability to move and shape public opinion.

While the corporate media abuses all of its power to scream propaganda about how Obama’s spying was a righteous and patriotic act, the American people, including a surprisingly large number of Democrats, are not only not buying it, they are moving in the exact opposite direction of where the fake news media is desperately trying to push them.