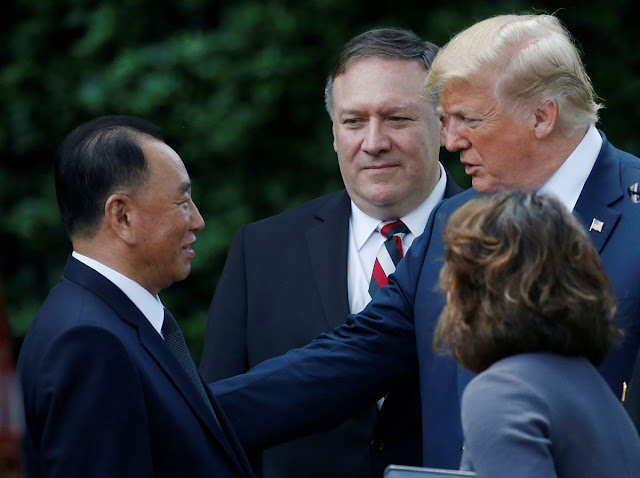 President Trump said Friday that a high-stakes summit between him and Kim Jong Un is back on for June 12, following a lengthy meeting with a top North Korean official in the Oval Office.

“We'll be meeting on June 12 in Singapore," the president told reporters after the North Korean emissary left the White House.

He called Friday's meeting with North Korea's Kim Yong Chol a "great start." Trump confirmed that the visiting official gave him a personal letter from dictator Kim Jong Un, though he hadn't yet read it.

Trump spoke to reporters after an extraordinary scene played out on White House grounds, with Trump hosting the North Korean official for over an hour in the Oval Office -- the latest gesture in an effort by both sides to get talks back on track after North Korea's belligerent rhetoric prompted Trump to nix the summit last week.

Trump said the meeting was supposed to just be about "the delivery of a letter" but ended up being a lengthy conversation with the "second most powerful man in North Korea."

“We talked about a lot of things," Trump said. "We really did. But the big deal will be on June 12.”

After the meeting, Trump and Secretary of State Pompeo were seen taking photos with the visitors.

Kim Yong Chol is the most senior North Korean visitor to the United States since Vice Marshal Jo Myong Rok visited Washington in 2000 to meet President Bill Clinton. He is North Korea's former military intelligence chief and is one of the North Korean leader's closest aides.

The official's arrival in Washington came a day after Pompeo declared that he was confident negotiations with Pyongyang over holding a nuclear summit were "moving in the right direction."

"Our two countries face a pivotal moment in our relationship, and it would be nothing short of tragic to let this opportunity go to waste," Pompeo said in New York after meeting with Kim.

The two countries, eyeing the first summit between the U.S. and the North after six decades of hostility, have also been holding negotiations in Singapore and the demilitarized zone between the two Koreas.

Kim Yong Chol left his hotel in New York City early Friday for the trip to Washington in a convoy of SUVs. Pompeo, the former CIA chief who has traveled to North Korea and met with Kim Jong Un twice in the past two months, said he believed the country's leaders are "contemplating a path forward where they can make a strategic shift, one that their country has not been prepared to make before."

Fox News’ John Roberts and Serafin Gomez and The Associated Press contributed to this report. 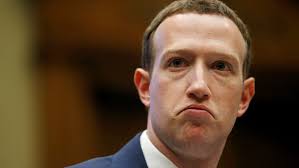 The company formed data-sharing partnerships with Apple, Samsung and dozens of other device makers, raising new concerns about its privacy protections.

As Facebook sought to become the world’s dominant social media service, it struck agreements allowing phone and other device makers access to vast amounts of its users’ personal information.

Facebook has reached data-sharing partnerships with at least 60 device makers — including Apple, Amazon, BlackBerry, Microsoft and Samsung — over the last decade, starting before Facebook apps were widely available on smartphones, company officials said.

The deals allowed Facebook to expand its reach and let device makers offer customers popular features of the social network, such as messaging, “like” buttons and address books.

But the partnerships, whose scope has not previously been reported, raise concerns about the company’s privacy protections and compliance with a 2011 consent decree with the Federal Trade Commission.

Facebook allowed the device companies access to the data of users’ friends without their explicit consent, even after declaring that it would no longer share such information with outsiders. Some device makers could retrieve personal information even from users’ friends who believed they had barred any sharing, The New York Times found.

Most of the partnerships remain in effect, though Facebook began winding them down in April. The company came under intensifying scrutiny by lawmakers and regulators after news reports in March that a political consulting firm, Cambridge Analytica, misused the private information of tens of millions of Facebook users.

In the furor that followed, Facebook’s leaders said that the kind of access exploited by Cambridge in 2014 was cut off by the next year, when Facebook prohibited developers from collecting information from users’ friends. But the company officials did not disclose that Facebook had exempted the makers of cellphones, tablets and other hardware from such restrictions.

“You might think that Facebook or the device manufacturer is trustworthy,” said Serge Egelman, a privacy researcher at the University of California, Berkeley, who studies the security of mobile apps.

“But the problem is that as more and more data is collected on the device — and if it can be accessed by apps on the device — it creates serious privacy and security risks.”

In interviews, Facebook officials defended the data sharing as consistent with its privacy policies, the F.T.C. agreement and pledges to users. They said its partnerships were governed by contracts that strictly limited use of the data, including any stored on partners’ servers. The officials added that they knew of no cases where the information had been misused.

The company views its device partners as extensions of Facebook, serving its more than two billion users, the officials said.

“These partnerships work very differently from the way in which app developers use our platform,” said Ime Archibong, a Facebook vice president. Unlike developers that provide games and services to Facebook users, the device partners can use Facebook data only to provide versions of “the Facebook experience,” the officials said.

Some device partners can retrieve Facebook users’ relationship status, religion, political leaning and upcoming events, among other data. Tests by The Times showed that the partners requested and received data in the same way other third parties did.

Facebook’s view that the device makers are not outsiders lets the partners go even further, The Times found: They can obtain data about a user’s Facebook friends, even those who have denied Facebook permission to share information with any third parties.

In interviews, several former Facebook software engineers and security experts said they were surprised at the ability to override sharing restrictions.

“It’s like having door locks installed, only to find out that the locksmith also gave keys to all of his friends so they can come in and rifle through your stuff without having to ask you for permission,” said Ashkan Soltani, a research and privacy consultant who formerly served as the F.T.C.’s chief technologist.

https://www.nytimes.com/interactive/2018/06/03/technology/facebook-device-partners-users-friends-data.html
Posted by Frances Rice at 9:30 AM