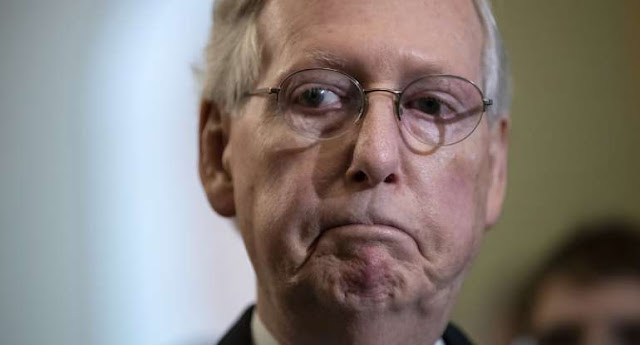 In the aftermath of the news that liberal Supreme Court Justice Ruth Bader Ginsburg has once again been treated for pancreatic cancer, talk of a potential vacancy on the court has once again heated up. While there will be disagreement over how to handle such a vacancy, it's clear that everyone knows a Supreme Court battle in 2020 will be brutal and contentious.

Chris Wallace, the host of Fox News Sunday, weighed in on Friday, "We all wish her a long, happy, healthy life. I will say this though, and again, there’s no reason not to think that she won’t be on the court the first Monday in October, but if she were forced to step down, this would make the Kavanaugh hearing, the Gorsuch hearing, Clarence Thomas, it would make it look like a tea party.”

Former Obama adviser David Axelrod warned Senate Majority Leader Mitch McConnell not to go through with filling a vacancy, should one occur:

If there is a SCOTUS vacancy next year and @senatemajldr carries through on his extraordinary promise to fill it-despite his own previous precedent in blocking Garland-it will tear this country apart.

If Ruth Bader Ginsburg were to retire, you can expect to be regularly reminded of Merrick Garland, Barack Obama's nominee to the Supreme Court following the death of Antonin Scalia. Garland was never given a hearing because Mitch McConnell was following The Biden Rule. In June of 1992, then-Senator Joe Biden, who was chairman of the Senate Judiciary Committee at the time, gave a speech on the Senate floor arguing that then-president George H.W. Bush shouldn't attempt to fill a vacancy to the Supreme Court in the middle of an election year.

Should a vacancy occur in 2020, Democrats will argue, just as Axelrod has, that this is the precedent and McConnell should table any Supreme Court nomination until after inauguration day 2021, when there might be a new president and a different party in the majority of the Senate.

Biden himself acknowledged the political intentions of delaying the naming of a replacement when he said, “Some will criticize such a decision and say that it was nothing more than an attempt to save a seat on the court in hopes that a Democrat will be permitted to fill it, but that would not be our intention.”

A vacancy in 1992 never happened, but had it occurred, you can bet that if George H.W. Bush had attempted to fill a vacancy in 1992, Senate Democrats, led by Joe Biden, would not have held hearings for that nominee. Joe Biden considered such a move established precedent.

Except there's one problem: Presidents have made nominations to the Supreme Court and seen them confirmed during election years.

In all of these cases but the last one, the president's party had a majority in the Senate. Biden made his case about postponing an election-year nomination to the court while there was a Republican president and the Democrats controlled the Senate, and he was clearly hoping to avoid stalling a nomination.

If there's anything Biden's 1992 speech tells us, it's that Democrats will establish or dismiss precedents based on their short-term convenience.

The only precedent here is that the Senate can exercise advice and consent however they please. Mitch McConnell has already vowed that he'd fill a vacancy in 2020.

Democrats will have to come up with another excuse other than citing a nonexistent precedent. The Biden Rule of 1992 may have come back to bite the Democrats in the rear in 2016, but that doesn't mean the GOP has to cave to their tantrums and rule changes that only serve their short-term political needs.

Democrats should be very scared of a potential vacancy on the Supreme Court in 2020. There is literally nothing to stop Trump and the GOP from filling the seat.