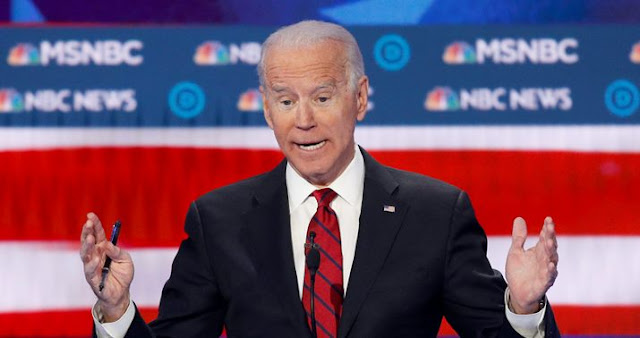 Joe Biden might enjoy improved electoral math these days, but the math around his family’s fortunes doesn’t add up at all — and it’s not just Hunter, either. Politico’s Ben Schreckinger has spent months tracking how Biden’s relatives got wealthy on their connections to the new Democratic frontrunner, including Joe’s younger brother James, who finds himself in the middle of a meltdown at a hospital firm. James Biden has been accused of running out on a personal loan of $650,000 after promising his older brother would arrange for a big influx of “Middle East money” that never materialized.

The raid of an Americore Health hospital represented a deepening of the legal morass surrounding James Biden’s recent venture into healthcare investing at a time when questions about the business dealings of Joe Biden’s relatives, and their alleged connection to the former vice president’s public service, continue to dog his presidential campaign.

In the weeks since the raid, two small medical firms that did business with James Biden have claimed in civil court proceedings to have obtained evidence that he may have fraudulently transferred funds from Americore “outside of the ordinary course of business,” and a former Americore executive has told POLITICO that James Biden had over half a million dollars transferred to him from the firm as a personal loan that has not yet been repaid.

The purpose of the Jan. 30 raid of an Ellwood City, Pa., hospital remains unclear, and there is no indication it was related to the actions of Biden’s younger brother, who has not been accused of criminal wrongdoing. Its owner, Americore, has faced legal problems and allegations of mismanagement that are unrelated to James Biden.

But recent filings in ongoing legal proceedings, along with new accounts provided to POLITICO by former Americore executives and others, point to potential pitfalls for the former vice president, painting the fullest picture to date of James Biden’s healthcare dealings and the ways in which they allegedly related to his powerful older brother. In 2017 and 2018, James Biden was embarking on a foray into healthcare investing, telling potential partners, including at Americore, that his last name could open doors and that Joe Biden was excited about the public policy implications of their business models, according to court filings and interviews with former business contacts of James’s.

The FBI’s raid appears aimed more at the company’s operations, which became so fraught at one point that it couldn’t meet its payroll. How it got to that state is a tale told through the lawsuits and through Schreckinger’s attempts to determine just what James Biden was promising and what he actually delivered.

Three years ago, James began looking for opportunities in the health-care markets, looking for financial partners who might benefit from his connections to power. In Schreckinger’s telling, which should be read in full, Biden sold himself as a key link to his older brother and his ability to trade power for wealth. James arranged for Americore’s founder to meet Joe and then convinced him to seek out a bridge loan while Joe and Jim got the infusion of cash from Middle Eastern figures purportedly anxious to curry favor with the former VP and presumed presidential candidate. At the same time, James got a personal loan from Americore, presumably either some sort of advance on the incoming investment or a benefit that Biden would repay when Americore was flush with cash.

Unfortunately for everyone except the mysterious Middle Eastern investors, the influx of cash to Americore never arrived. Now the firm is in bankruptcy, and one of the assets on the books is apparently the uncollected loan to James Biden, according to the lawsuits from its creditors. It’s not the first time a company linked to James Biden has found itself in financial distress — Schreckinger mentions two other lawsuits, one of which remains ongoing — but Americore’s the first to attract the attention of law enforcement for its collapse.

Assuming that the facts are correct, this reads like a bunco scheme. A relative of a powerful politician tells a business owner that he can find him new money through personal connections, gets the owner to sign a loan, and then asks for a large personal loan himself. When the money doesn’t show up, the supposed rainmaker skedaddles with the loot. If that’s in fact what happened, James Biden’s biggest mistake might have been pulling this with a publicly-traded company.

Kudos to Schreckinger and Politico for sticking with this story, but it’s curious how incurious other media outlets have been about the Bidens. Donald Trump made Hunter impossible to ignore, but the coverage of Hunter has been weirdly sympathetic and defensive. In contrast, they have barely asked any questions at all about James, even after the FBI raid on Americore. The better Joe’s electoral math gets, one presumes the harder the media will attempt to ignore the math around James.