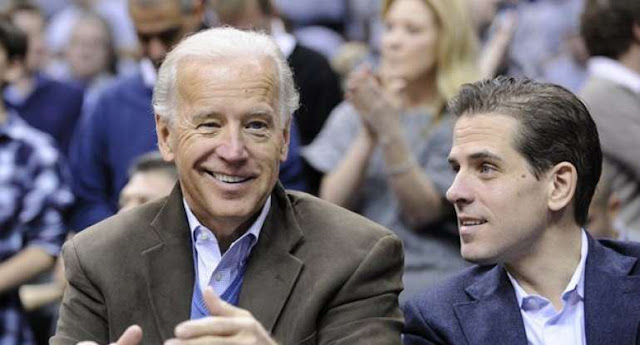 As the world struggles to combat a coronavirus pandemic that the Chinese Communist Party lied to cover up, new documents obtained by the Daily Caller show that Hunter Biden, the youngest son of Democratic presumptive nominee Joe Biden, has remained on the board of directors of a Chinese company that profited as Joe Biden went soft on China. Biden's youngest son pledged to step down from the board in October, but he appears to remain doubly connected to the Chinese company.

In a statement issued on October 13 by George Mesires, Hunter's lawyer, the former vice president's son pledged to resign his position on the board of the Chinese private equity firm Bohai Harvest RST (BHR) "on or by October 31." The statement did not say whether he would relinquish his ownership stake in the firm. Mesires told the Daily Caller in November that his client had resigned from the board, but he did not provide any evidence of the departure at the time.

As of Tuesday, Chinese business records still name Hunter Biden a director of BHR, the Daily Caller reported. The former veep's son also retains a 10 percent equity stake in BHR through his company, Skaneateles LLC, according to Chinese business records. BHR manages the equivalent of $2.1 billion in assets, according to its website. Hunter Biden has served as an unpaid member of its board since its founding in 2013, and in October 2017 he obtained his equity stake in the firm with a $420,000 investment, according to his lawyer.

Hunter Biden's continued involvement with BHR is a major scandal for Joe Biden, as Peter Schweizer explains in his book Secret Empires: How the American Political Class Hides Corruption and Enriches Family and Friends.

In 2013 and 2014, China embarked on an aggressive air and island campaign to dominate the South China Sea, much to the dismay of Japan and other countries in the region. Yet when Vice President Joe Biden visited the country in 2013, he emphasized trade between the U.S. and China and did not focus on the issue. Secretary of State John Kerry did the same in 2014.

Meanwhile, Biden's son Hunter and Kerry's stepson Chris Heinz carried out massive business deals with Chinese officials and the Bank of China, which is embedded in a complex network involving state ministries, security forces, and the Communist Party, and which provides capital for China's economic statecraft. Hunter Biden and Chris Heinz — whom Schweizer dubs "American Princelings" — also invested in a Chinese nuclear company under investigation by the FBI.

"During a critical eighteen-month period of diplomatic negotiations between Washington and Beijing, the Biden and Kerry families and friends pocketed major cash from companies connected to the Chinese government," Schweizer writes.

When the veep visited China in December 2013, Hunter Biden went with him. The son was negotiating a major deal between Rosemont Seneca — a branch of Rosemont Capital, an investment fund of the Heinz Family Office — and the Bank of China. As Joe Biden touted China's trade with the U.S., his son was working trade deals with the bank owned by the Communist Party. Ten days after the Bidens' visit, the Bank of China created an investment fund with Rosemont Seneca, the notorious Bohai Harvest RST (BHR).

"In short, the Chinese government was literally funding a business that it co-owned along with the sons of two of America's most powerful decision makers," Schweizer explains.

Hunter had even arranged for Joe Biden to shake hands with the CEO of BHR in December 2013, causing some concern in the White House, The New Yorker reported.

Both the former veep and his son seem to understand the humongous political liability Hunter's position on the BHR board is for Joe Biden. The princeling's pledge to step away from the board received widespread media coverage in The Washington Post, The New York Times, and elsewhere. The former veep praised his son's announcement at the time.

"The statement my son put out today, which I saw when he put it out — I was told it was going to be put out, I did not consult with him about what’s being put out — in fact represents the kind of man of integrity he is," Joe Biden said in October.

Yet it appears that Hunter Biden does not intend to honor this pledge.

This "man of integrity" has become the notorious black sheep of the Biden family. The impeachment of President Donald Trump drew new attention to Hunter Biden's deals with the shady Ukrainian gas firm Burisma and Joe Biden's decision to pressure Ukraine's president to fire the prosecutor investigating Burisma. At the same time, a paternity case revealed that Hunter Biden had cheated on his dead brother's widow — before he married a woman sixteen years his junior.

Joe Biden has repeatedly insisted that he knew nothing of his son's foreign business dealings, which appear to have involved Hunter trading on his influential father's name while his father greased the skids. Yet Biden has distanced himself from his son, omitting him from the Christmas family photo and deliberately excluding at least one of Hunter's children from his list of grandchildren.

The presumptive nominee should be embarrassed at his son's behavior, but he should also be embarrassed by this scandal — especially since it reveals his ties to China. America cannot afford a president who went soft on China amid its South China Sea aggression after the Communist Party hid the spread of the coronavirus from the world. Joe Biden's family business interests should be a tremendous red flag in the 2020 election, especially after the coronavirus crisis.

Joe Biden and His Wife Jill Omit Hunter Biden's Love Child From List of Grandchildren
Posted by Frances Rice at 10:45 AM