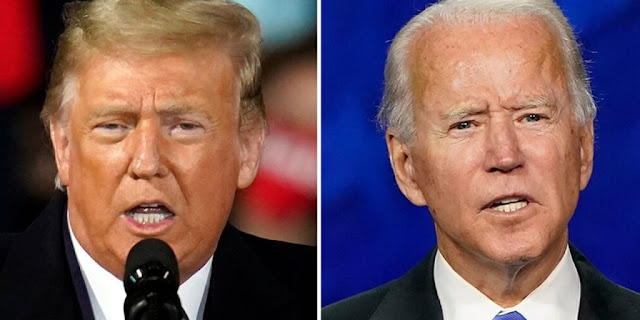 A source said the Biden campaign has declined the ear check.

CLEVELAND -- President Trump is asking for an additional ground rule ahead of Tuesday night’s first presidential debate between himself and Democratic presidential nominee Joe Biden. But the Biden campaign is rejecting it.

The Trump campaign, in the hours ahead of the debate, claimed Biden's campaign had agreed to such an inspection before reversing themselves.

“Joe Biden’s handlers several days ago agreed to a pre-debate inspection for electronic earpieces but today abruptly reversed themselves and declined. Biden’s handlers have asked for multiple breaks during the debate, which President Trump doesn’t need, so we have rejected that request," said Trump campaign spokesman Tim Murtaugh. "On top of the refusal to take a drug test, it seems pretty obvious that the Biden team is looking for any safety net they can find in the hours leading up to the debate. With his 47 years as a failed Washington politician, how much help does Biden want?

Kate Bedingfield, Biden’s deputy campaign manager, called the Trump campaign’s request “absurd” in a call with reporters. She also denied the claim that the campaign had asked for breaks.

"His staff seems concerned that he may not do well tonight and they’re already laying the groundwork for how they’re going to lie about why," Bedingfield said. "It is completely absurd. Of course, he’s not wearing an earpiece and we never asked for breaks."

Over the last several weeks, sources told Fox News, the former vice president's campaign has also requested two breaks -- one every 30 minutes -- to break up the 90-minute commercial-free program. But that request has been denied by their Trump counterparts, the sources said.

A Trump campaign source told Fox News that "our guy doesn't need breaks. He gives 90-minute speeches all the time."

And the source says that the negotiations are still on-going for Tuesday's night's debate -- as well as the remaining two showdowns between Biden and Trump.

Fox News is reaching out to the Commission on Presidential debates – the bipartisan organization that for more than three decades has organized and produced the debates – for a response to the requests from the two campaigns.

The commission has traditionally pushed back against requests from the networks for commercial breaks.

The debate – the first of three between Biden and Trump -- kicks off at 9 p.m. ET Tuesday and is being hosted by Case Western Reserve University and the Cleveland Clinic, in Cleveland, Ohio. The showdown’s being moderated by "Fox News Sunday" anchor Chris Wallace.