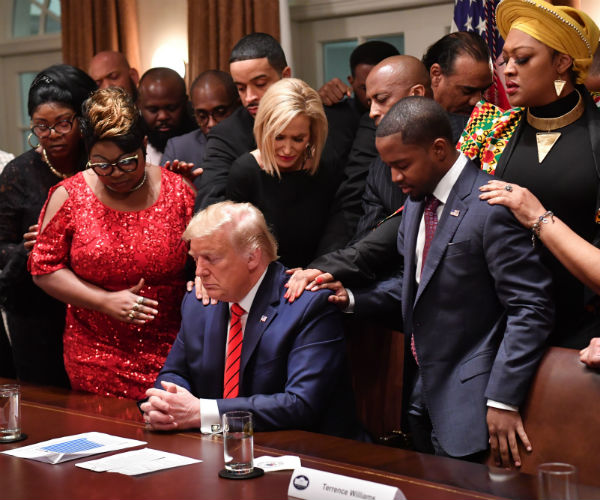 U.S. President Donald Trump (C) in a prayer circle with Black leaders in the Cabinet Room of the White House in Washington, D.C. - Feb. 27, 2020. (Nicholas Kamm / AFP via Getty Images)

The way the mainstream media and Big Tech are ignoring the latest revelations about Joe and Hunter Biden, you would think they were Black Trump supporters!

That certainly wasn’t the case in the re-election bids of Ronald Reagan, George H.W. Bush, and George W. Bush.

This year alone, in addition to my book, "How Obama Failed Black America and How Trump Is Helping It," several others are praising Trump in their books as well, including: "How Trump Is Making Black America Great Again" by Horace Cooper, "Coming Home — How Black Americans Will Re-Elect Trump" by Vernon Robinson III and Bruce Eberle, and fellow Newsmax Insider, Evangelist Dr. Alveda C. King's: "Why Trump?"

These authors recognize that a growing number of Black Americans support the president on issues of importance to them — and their families.

An Investors Business Daily/TIPP poll conducted following the first presidential debate supports that view. It showed that the president's backing among Black Americans had nearly doubled — from 8% in 2016 to 15%.

One reason for this support is that many Black Americans remember how they were doing in Trump’s pre-pandemic economy. In my book, I quote the old maxim a "rising tide lifts all boats." That unquestionably applies to Black Americans.

According to the White House Council on Economic Advisers, 1.2 million Black Americans were lifted out of poverty between 2016 and 2019 — "the largest reduction on record — spanning over 50 years."

Also, of significance, the Black unemployment rate has decreased by nearly 5% since May.

Blacks living in Democratically-controlled crime-ridden cities, where Left-wing leaders and mobs are demanding police defunding, don’t want to give up their Second Amendment Rights or let thugs, rioters, and looters harm their families — robbing them of everything they've worked for.

Philip Smith, president of the National African American Gun Owners’ Association, said his organization’s annual membership has increased by as much as 2,000 new members per day, a figure he used to see annually.

He added that the time has come when Blacks must "save ourselves."

The three little Black children on the cover of my book represent what is of utmost importance to Black Americans — the safety and future of their children.

Also, not getting much attention is the large number of Black Republicans seeking federal office.

According to BlakPac, an organization that focuses on supporting Black, Hispanic, and Asian candidates, 29 Black Republicans are running for federal office.

Some of those who have gained national attention include:

George Farrell, a BlakPac co-founder, told me that this is a "record number" of Black Republican candidates and "one of the best classes ever!"

Many Black Americans have noticed these and other Blacks courageous enough to push back against the Black and white liberal Democratic establishments and — quietly —support President Trump.

Also, not receiving media attention is an independent Black Super PAC raising funds for the re-election of the president — Black Americans To Re-Elect the President.

It has been running ads targeting 35-year-old plus Black voters on urban contemporary radio stations in key battleground states. The focus there is on key issues of importance to Blacks, inclusive of school choice and abortion.

Since January of last year, it has raised over $4.6 million!

These factors, combined with strong messaging on these issues, make Black voters the president's secret silent weapon bringing him at least 13-15 percent of their vote.

Clarence V. McKee is president of McKee Communications, Inc., a government, political, and media relations and training consulting firm in Florida. He served on the U.S. Senate staff, held several positions in the Reagan administration and Reagan presidential campaign, and was an advisor to the Angola Freedom Fighters (“UNITA”).

He is a former co-owner of WTVT-TV in Tampa and a former chairman of the Florida Association of Broadcasters. His articles have been published in several publications including The Washington Times, Human Events Online, the Florida Courier and the South Florida Sun-Sentinel.

His media appearances include Newsmax TV and FOX News Radio. He is the author of "How Obama Failed Black America and How Trump Is Helping It." Read Clarence V. McKee’s Reports — More Here.