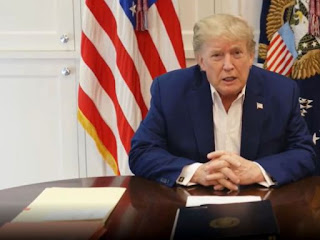 President Trump said he’s feeling good Saturday and vowed to beat COVID-19 quickly in a video that he posted on Twitter.

“I feel much better now,” Trump said. “We’re working hard to get me all the way back.”

Trump spoke evenly and showed no signs of difficulty breathing in the four-minute video.

Despite portraying himself as improving, the president conceded that he does not know what the future holds.

“You don’t know what will happen over the next few days,” he said. “They say that’s the real test, so we’ll see what happens.”

Trump said he hoped his battle with COVID-19 would rally the world to turn back the pandemic, which has killed more than 200,000 Americans.

Wearing a blazer and open-necked shirt, Trump said he wanted to go to Walter Reed Medical Center so he could avoid being cooped up in the White House residence. He called it a sign of his leadership that he agreed with being airlifted to the hospital in nearby Bethesda, Md.

“As a leader you have to confront problems,” said Trump, who has faced harsh criticism for his mishandling of the pandemic.

He vowed to return to the presidential campaign and said he had unfinished business.

“President Trump continues to do well, having made substantial progress since diagnosis,” said the statement from White House physician Dr. Sean Conley.

“He remains fever-free and off supplemental oxygen with a saturation level between 96 and 98% all day.”

Trump was up and about in his suite “without difficulty,” Conley said. "While not yet out of the woods, the team remains cautiously optimistic.”

Conley also gave an upbeat assessment of Trump’s condition in a press conference earlier Saturday. But he did not say when Trump last tested negative, or how high a fever he experienced.

White House chief of staff Mark Meadows warned that Trump faces a crucial two days and is “not yet on a clear path to recovery.”