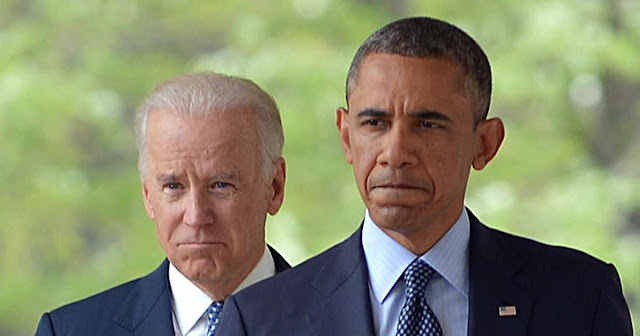 Barack Obama and Joe Biden may have given a public impression of the peaceful transfer of power, but they were working behind the scenes to sabotage the incoming president.

Bipartisan calls for President Trump to concede the election and work with Joe Biden’s transition team grow louder each day. In a joint op-ed, Andrew Card and John Podesta last week urged the president to start handing over the keys to the White House.

“[F]or the good of our country, and with the rest of the world watching, America needs to come together and start a smooth and peaceful transition of power,” the pair wrote for the Washington Post. “[A] delayed transition and the absence of cooperation between the outgoing and incoming administrations could hinder economic recovery, slow the distribution of a vaccine and, God forbid, put American lives at risk.”

Right on cue and per his habit, the 44th president is on the scene to torch an already-smoldering body politic. Obama began his media book tour this month—timed undoubtedly to coincide with a volatile post-election period—and he is hard at work antagonizing his biggest political foe. (The first volume of his two-volume memoir, A Promised Land, is 768 pages long.)

In an interview with CBS News’ Gayle King over the weekend, Obama bragged about his handling of the transition between his White House and Donald Trump. “The peaceful transfer of power, the notion that any of us who attain an elected office…are servants of the people,” Obama explained with a straight face. “We’re not above the rules, we’re not above the law.”

The former president told a swooning Scott Pelley on “60 Minutes” that “there are a set of traditions that we have followed in the peaceful transfer of power. The outgoing president congratulates the incoming president, instructs the government and the agencies to cooperate with the new government coming in.”

If those remarks don’t make your eyes roll all the way back in your head and prompt a loud guttural guffaw, nothing will. Between Election Day 2016 and Inauguration Day 2017, Barack Obama and Joe Biden may have given a public impression of the peaceful transfer of power, but they were working behind the scenes to sabotage the incoming president and his team. Obama, on his way out the door, set in motion four straight years of internal insurrection.

It was sedition, not transition.

At the very moment Barack Obama welcomed Trump to the Oval Office on November 10, 2016 for a kumbaya photo op, his FBI was spying on Trump campaign advisor Carter Page, and by extension, Donald Trump. Barack Obama’s FBI, under the corrupt leadership of James Comey, used fabricated political opposition research to convince a secret court that Page was a Russian agent and had conspired with the Russians to rig the election. Comey and Sally Yates, Obama’s deputy attorney general, signed the initial FISA warrant on October 21, 2016.

After Trump won, Obama continued to stoke the fantasy that Trump’s election was illegitimate due to Russia’s “attack” on our democracy. On December 9, 2016, Obama amplified the farce by instructing his intelligence community to conduct a “full investigation” into the 2016 election.

On the same day the intelligence community report was released, Obama’s FBI director and director of national intelligence met with Trump in New York City. Comey, citing what he later called “unverified and salacious” accusations contained in the Steele dossier, warned President-elect Trump on January 6, 2017 that the Russians might have a recording of prostitutes urinating in front of him in a Moscow hotel room—the so-called “pee tape”—that could give the Kremlin “leverage” over the new president.

But that weasel move wasn’t an instance of Comey going rogue; during an Oval Office meeting the day before, Comey told his boss that he was planning to ambush Trump with the unproven allegation. (Joe Biden also attended the infamous January 5, 2017 briefing.) Comey later bragged that Obama “moved his eyes up and down like a Groucho Marx thing” in approval.

A top Obama official then leaked details about the classified briefing to CNN.

“Classified documents presented last week to President Obama and President-elect Trump included allegations that Russian operatives claim to have compromising personal and financial information about Mr. Trump,” CNN reported January 10, 2017. “One high level administration official told CNN, ‘I have a sense the outgoing administration and intelligence community is setting down the pieces so this must be investigated seriously and run down.’”

The Trump-Russia collusion hoax—concocted by Obama and his allies, promoted by the Trump-hating news media—officially was born; the pretext for the appointment of a special counsel, which happened four months later, was planted.

Obama lackeys engaged in other subversive tactics as they cleaned out their desks. Top White House officials, including Biden and Obama’s chief of staff, made several requests to unmask Trump aides caught up in surveillance. Clapper testified on January 5, 2017 to the Senate Armed Services committee, chaired by Trump’s arch enemy the late John McCain, that it was unclear whether Russian “hacking” changed any votes in the election. Clapper’s comments, however, were intended to imply that they had.

The first renewal of the FISA warrant on Carter Page was signed by Comey and Yates on January 12, 2017; the most powerful government tools designed to catch foreign terrorists were still being used against Team Trump as Trump prepared to run the country.

In many ways, a transition of power from a Democratic president to a Republican president never happened. Democratic Party apparatchiks still rule the administrative state; they’ve attempted to thwart President Trump at every turn.

As Lee Smith noted, Obama is the first president since Woodrow Wilson to remain in Washington D.C. after his term ended. Obama’s operation against Trump began before the election, accelerated during the transition period, and continues to this day.

Joe Biden doesn’t need a formal “transition” back to power. His people still run Washington, D.C.; Biden’s BFF, Barack Obama, made sure of it.