Trump Tells Black Church: ‘We Need a Civil Rights Agenda for Our Time’ 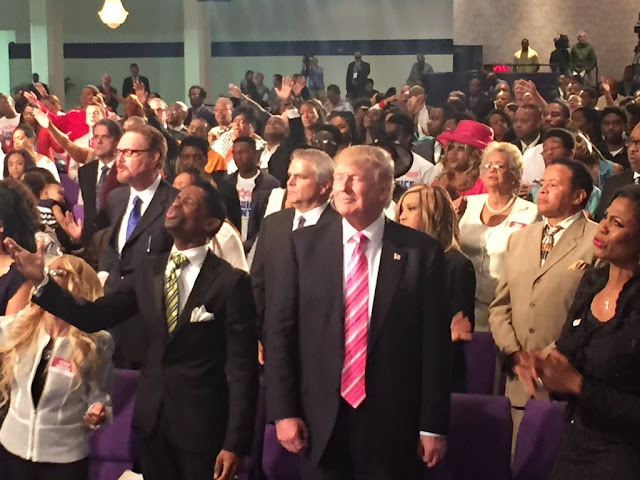 By Alex Swoyer
Donald Trump joined Great Faith Ministries International, an African American church located in Detroit, on Saturday where he spoke to the community about the importance of faith helping to heal a divided nation.
“For centuries, the African American church has been the conscience of our country,” Trump told the congregation as he spoke briefly during the service.
The Republican nominee said African American churches have “lifted up the soul of our nation” and led the civil rights movement.
He said he wants leaders to help heal the nation by providing “a greater platform to the black churches and church goers.”
“I will always support your church — always — and defend your right to worship,” he added. “I hope my presence here will also help your voice to reach new audiences in our country and many of these audiences desperately need your spirit and your thought.”
Dr. Ben Carson joined Trump at the church.
“Today, I just want to let you know I am here to listen to you and I am doing that,” Trump promised, adding that as a leader he wants to “step into the community and learn what is going on.”
“I’m here today to learn so we can together remedy injustice in any form and so we can also remedy economics so that the African American community can benefit economically thought jobs and income,” he added. “I believe we need a civil rights agenda for our time.”
He said he wants an America that ensures a right for everyone to a great education and to live in safety and peace.


Trump added that there are still “many wrongs that must be made right” in the African American community and that his prayer is that “the America of tomorrow will be one of unity.”
Prior to his brief remarks, Trump took photos with church goers, holding a baby.
The Republican nominee quoted the Bible during his speech, reading, “No one has ever seen God, but if we love one another God lives in us and his love is made complete in us.”
“And that’s so true,” he added.


Bishop Wayne T. Jackson and his wife gave Trump a prayer shawl from Israel that Jackson had personally fasted and prayed over, wrapping it around Trump. “With this prayer shawl, whenever you’re flying in from coast to coast … there is an anointing is the power of God,” Jackson explained.
Jackson also gave Trump a Bible and a pin to wear for prayer and protection.


Trump put the pin on his suit and said, “I feel better already.”
Jackson interviewed the Republican nominee for roughly half an hour, which will be aired in a week on the Impact Network, an African American owned and operated Christian broadcast network.