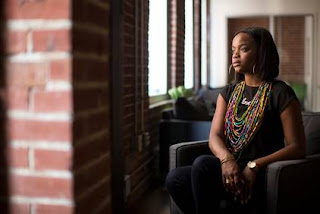 Brittany Packnett, 31, a St. Louis-based activist, said young black voters wanted more than "a candidate who is better than the alternative." Credit Whitney Curtis for The New York Times

WASHINGTON — When a handful of liberal advocacy organizations convened a series of focus groups with young black voters last month, the assessments of Donald J. Trump were predictably unsparing.

But when the participants were asked about Hillary Clinton, their appraisals were just as blunt and nearly as biting.

"What am I supposed to do if I don't like him and I don't trust her?" a millennial black woman in Ohio asked. "Choose between being stabbed and being shot? No way!"

"She was part of the whole problem that started sending blacks to jail," a young black man, also from Ohio, observed about Mrs. Clinton.

"He's a racist, and she is a liar, so really what's the difference in choosing both or choosing neither?" another young black woman from Ohio said.

Hillary Clinton's difficulties with young African-Americans were laid bare in four damning focus groups conducted for a handful of progressive organizations. The results were outlined in a presentation by a Democratic pollster, and shared with The Times by another party strategist who wanted to draw attention to Mrs. Clinton's difficulties in hopes that the campaign would move more aggressively to address the matter. 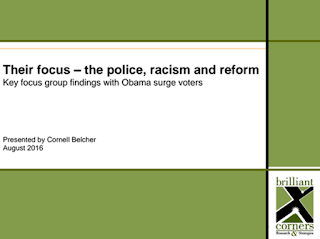 Young African-Americans, like all voters their age, are typically far harder to drive to the polls than middle-aged and older Americans. Yet with just over two months until Election Day, many Democrats are expressing alarm at the lack of enthusiasm, and in some cases outright resistance, some black millennials feel toward Mrs. Clinton.

Their skepticism is rooted in a deep discomfort with the political establishment that they believe the 68-year-old former first lady and secretary of state represents. They share a lingering mistrust of Mrs. Clinton and her husband over criminal justice issues. They are demanding more from politicians as part of a new, confrontational wave of black activism that has arisen in response to police killings of unarmed African-Americans.

"We're in the midst of a movement with a real sense of urgency," explained Brittany Packnett, 31, a St.Louis-based leader in the push for police accountability. Mrs. Clinton is not yet connecting, she said, "because the conversation that younger black voters are having is no longer one about settling on a candidate who is better than the alternative."

The question of just how many young African-Americans will show up to vote carries profound implications for this election. Mrs. Clinton is sure to dominate Mr. Trump among black voters, but her overwhelming margin could ultimately matter less than the total number of blacks who show up to vote.

To replicate President Obama's success in crucial states such as Florida, Ohio and Pennsylvania, she cannot afford to let the percentage of the electorate that is black slip far below what it was in 2012. And while a modest drop-off of black votes may not imperil Mrs. Clinton's prospects, given Mr. Trump's unpopularity among upscale white voters, it could undermine Democrats' effort to capture control of the Senate and win other down-ballot elections.

Mrs. Clinton's difficulties with young African-Americans were laid bare in four focus groups conducted in Cleveland and Jacksonville, Fla., for a handful of progressive organizations spending millions on the election: the service employees union, a joint "super PAC" between organized labor and the billionaire environmentalist Tom Steyer, and a progressive group called Project New America. The results were outlined in a 25-page presentation by Cornell Belcher, a Democratic pollster, and shared with The New York Times by another party strategist who wanted to draw attention to Mrs. Clinton's difficulties in hopes that the campaign would move more aggressively to address the matter. Word of the report has spread in the constellation of liberal operatives and advocacy groups in recent weeks, concerning officials who saw diminished black turnout hurt Democratic candidates in the last two midterm elections.

Adding to the worries is a separate poll of African-Americans that Mr. Belcher conducted earlier in the summer indicating that Mrs. Clinton is lagging well behind Mr. Obama's performance among young blacks in a handful of crucial states.

"There is no Democratic majority without these voters," Mr. Belcher said. "The danger is that if you don't get these voters out, you've got the 2004 John Kerry electorate again."

In Ohio, for example, blacks were 10 percent of the electorate in the 2004 presidential race. But when Mr. Obama ran for re-election in 2012, that number jumped to 15 percent. 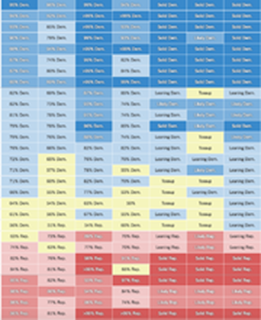 What frustrates many blacks under 40 is Mrs. Clinton's overriding focus on Mr. Trump.

"We already know what the deal is with Trump," said Nathan Baskerville, a 35-year-old North Carolina state representative. "Tell us what your plan is to make our life better."

Such talk can be frustrating to Mrs. Clinton's aides, who point out that her first speech of the campaign was on criminal justice and that she has laid out a series of proposals on the topic.

The focus groups and interviews with young black activists suggest many of them are not aware of Mrs. Clinton's plans regarding police conduct, mass incarceration and structural racism broadly.

Christopher Prudhome, 31, recounted a recurring conversation he has with other African-Americans as he travels around the country as the head of a nonpartisan group dedicated to registering young voters: They do not like either candidate.

"Young people feel discouraged and apprehensive about the political process as is, and then they look at the two options in front of us," said Mr. Prudhome, adding of Mrs. Clinton: "Nobody has seen an agenda for African-American millennials. I don't think they believe she cares about them."

Part of Mrs. Clinton's problem, said Symone Sanders, a former top aide to Senator Bernie Sanders's campaign, is that the candidate is overly cautious and is conducting an outdated style of black outreach.

Ms. Sanders has begun taking matters into her own hands. She said she was working with other young activists to recruit black celebrities for a millennial mobilization tour through Florida, Georgia, North Carolina and Virginia.

"Black churches and an H.B.C.U. tour is just not going to cut it in 2016," said Ms. Sanders, referring to historically black colleges and universities. "The Clinton campaign has to be willing to get out of what's comfortable and get on the streets."

Mrs. Clinton has met with mothers of those who lost children at the hands of the police and has used the signature refrain that "black lives matter" in public remarks. But she and her husband also come from an earlier political tradition rooted in the Deep South, where black voters are primarily reached through the church and the threat of white conservative backlash is never far from mind.

And the leaders are more diverse. "It's not just heterosexual men," she noted.

Not only are younger black activists reached in different ways, they also have far higher expectations on leaders, dismissing boilerplate pleas for racial equality and justice as insufficient.

"Gone is the day of patience," said Tony J. Payton Jr., 35, a former Pennsylvania state representative. "No longer should we accept systemic racism."

Doubts about how aggressively Mrs. Clinton will move to combat racism are at the heart of black suspicion toward her. Some African-Americans said her 1996 reference to some young criminals as "super-predators," and the legislation that President Bill Clinton signed imposing stiff sentences on nonviolent offenders, have made today's activists skeptical about her true intentions.

Mr. Trump has turned to remarkably blunt language about blacks in recent weeks — portraying their communities as dystopian hellscapes and asking them, in courting their support, "What do you have to lose?" Some African-American allies of Mrs. Clinton believe he is serving as her most effective get-out-the-vote lever.

"He is literally saying something every day that is disrespectful to the black community," said Michael Blake, a New York State assemblyman from the Bronx who worked on Mr. Obama's campaigns and is close to many Clinton aides.

Yet when African-American voters in the focus groups were shown campaign fliers and asked to rate them, there was no mistaking what was most effective.

A pamphlet with a picture of Mr. Trump that read, "We have to beat the racists," fell flat with young black audiences.

Scoring much higher were a stark black and white handout showing the names of those killed at the hands of the police and another with images of mothers of the victims that said, "Their Children Can't Vote, Will You?"