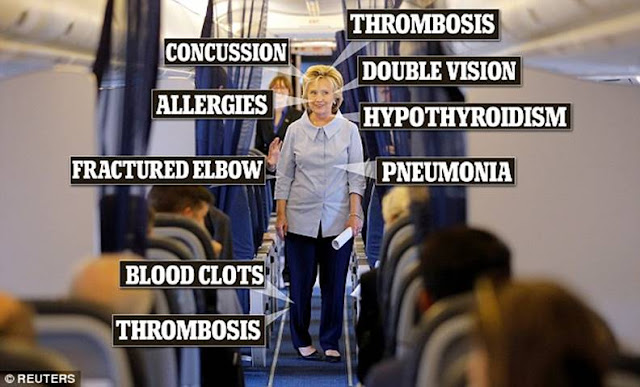 
Hillary Clinton's medical history – and her tendency to keep personal and medical information far from view – is coming in for new scrutiny following revelations that the candidate got diagnosed with pneumonia Friday in advance of her stumble in New York.


Clinton's stumble, caught on camera Sunday after she had to leave Sept. 11th anniversary memorial services after about an hour and a half, was the latest in a line of health spats that have made it into the news during her career.


'Antibiotics can take care of pneumonia. What's the cure for an unhealthy penchant for privacy that repeatedly creates unnecessary problems?' asked President Obama's former message guru David Axelrod in a tweet Monday – a message promptly retweeted by Trump's campaign manager Kellyanne Conway.
To see details about Hillary's troubling multi-year health problems which make her unfit to be president, visit:
Posted by Frances Rice at 8:52 AM