BY JANITA KAN | The Epoch Times 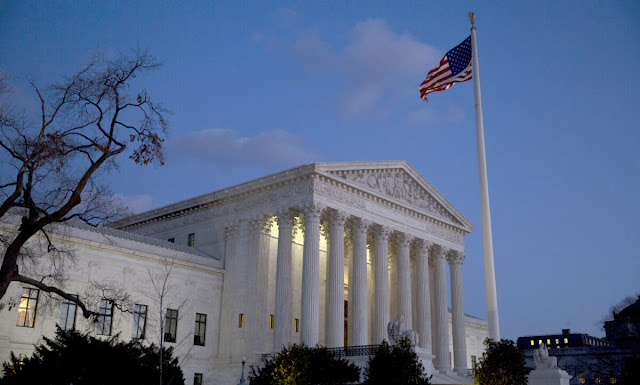 The American flag flies in front of the U.S. Supreme Court in Washington on Feb 13, 2016. (Drew Angerer/Getty Images)

In an order, the justices denied Texas’s request to sue Pennsylvania, Georgia, Michigan, and Wisconsin, opining that the Lone Star State lacked legal standing—or capability—to sue under the Constitution because it has not shown a valid interest to intervene in how other states handle their elections.

“Texas has not demonstrated a judicially cognizable interest in the manner in which another State conducts its elections,” the order (pdf) read. “All other pending motions are dismissed as moot.”

Justice Samuel Alito issued a separate statement to say he would have granted Texas’s request to sue, but not the preliminary injunction, as he believes the Supreme Court is obligated to take up any case that falls within its “original jurisdiction,” meaning the court has the power to hear a case for the first time as opposed to reviewing a lower court’s decision. Justice Clarence Thomas joined Alito in his statement.

“In my view, we do not have discretion to deny the filing of a bill of complaint in a case that falls within our original jurisdiction. … I would therefore grant the motion to file the bill of complaint but would not grant other relief, and I express no view on any other issue,” Alito wrote in his statement. He did not address the questions in the case.

The state of Texas had asked the Supreme Court on Dec. 7 for permission to sue the four battleground states in an attempt to protect the integrity of the 2020 election.

The Lone Star State has accused the four states of changing election rules in violation of the U.S. Constitution’s Electors Clause, unequal treatment of voters, and causing voting irregularities by relaxing ballot-integrity protections under state law, opening up potential for voting fraud.

Texas was hoping to obtain a declaration from the Supreme Court that the four states conducted their 2020 election in violation of the U.S. Constitution. It had also asked the court to prohibit the count of the Electoral College votes cast by the four states. For the defendant states that have already appointed electors, the suit asked the justices to order state legislatures to appoint new electors according to the U.S. Constitution.

Several attorneys general from the defendant states have responded to the order. Pennsylvania Attorney General Josh Shapiro said, “The U.S. Supreme Court saw through this seditious abuse of the judicial process, and its swift denial should make anyone contemplating further attacks on our election think twice.”

“While these stunts are legally insignificant, their cost to our country—in misleading the public about a free and fair election and in tearing at our Constitution—is high and we will not tolerate them from our sister states or anyone else,” Shapiro added.

Michigan Attorney General Dana Nessel also issued a statement, saying that the ruling “is an important reminder that we are a nation of laws, and though some may bend to the desire of a single individual, the courts will not.”

Hours before the order, Trump wrote in a Twitter post: “If the Supreme Court shows great Wisdom and Courage, the American People will win perhaps the most important case in history, and our Electoral Process will be respected again!”

After the lawsuit was filed, state attorneys general around the country began to express their position on the issues.

The Republican attorneys general of Idaho and Wyoming declined to participate in the lawsuit. Republican Ohio Attorney General Dave Yost filed a brief on “behalf of neither party,” arguing in favor of the court resolving the central question raised by Texas but opposing the relief sought by the Lone Star State.