The Emperor Has No Clothes: A Tale for the Times 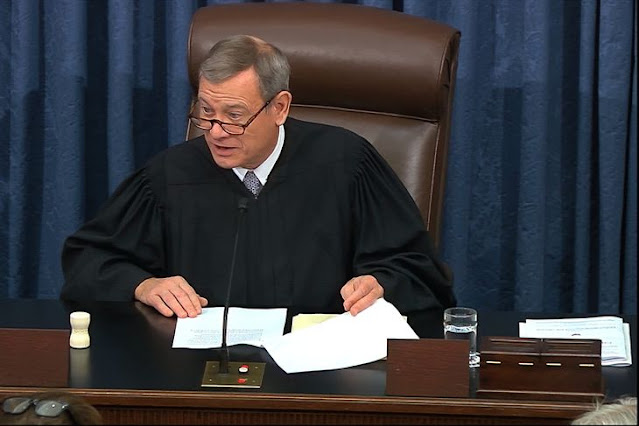 In this image from video, presiding officer Chief Justice of the United States John Roberts speaks as closing arguments in the impeachment trial against President Donald Trump begin in the Senate at the U.S. Capitol in Washington, Monday, Feb. 3, 2020. (Senate Television via AP)

Hans Christian Andersen’s celebrated folk tale The Emperor’s New Clothes serves as a parable for our ideological age and in particular for the current political environment in the U.S. in which a presidential election has been stolen from the people by massive and undoubted electoral fraud.

We remember how the tale begins. A team of weavers come to town and convince the Emperor that they can weave him a magical suit of clothes of unsurpassed magnificence that can also serve to distinguish the foolish from the wise. Only those unfit for the jobs and positions they hold will not be able to see it; the rest will be in awe of the beauty of the apparel. The weavers pretend “to work at the empty looms until late at night…cutting the air with their scissors and sewing with needles without any thread in them.”

The Emperor sends his emissaries to examine the wondrous cloth. Unwilling to admit that they see nothing, thus exposing themselves as nitwits, they return full of praise for the invisible stuff. “What a splendid design! What glorious colors!” they gush. Meanwhile “the thieves ask for more silk and gold to complete what they had begun and put all that was given them into their knapsacks.” When all is ready and the Emperor properly fitted, he appears in public “walking under his high canopy” in a grand procession “through the streets of his capital.” The people are amazed by the spectacle. “‘Oh! How beautiful are our Emperor’s new clothes!’ they cry. ‘What a magnificent train there is to the mantle; and how gracefully the scarf hangs!’ No one would admit that these much admired clothes could not be seen because, in doing so, he would have been saying he was either a simpleton or unfit for his job.”

Except, of course, for the proverbial “little child,” the incarnation of innocence and honesty, who speaks the truth—“But the Emperor has nothing at all on!”—and manages to convey his message to the crowd. “What the child has said was whispered from one to another.” The Emperor realizes that he has gone from riches to rags. He has no choice but to accept his disgrace and “walk on in his underwear,” while his attendants go through the motions of holding up his train, “although, in reality, there was no train to hold.”

Obviously, the tale cannot be applied point by point to the current situation unfolding in the political theater that passes for an election. As Samuel Taylor Coleridge said in his Biographia Literaria, “No metaphor runs on all four legs.” Nonetheless, there are enough similarities to establish the story as a political primer, with variations and idiomatic applications, for the sordid scene we are witnessing daily. The sartorial travesty is or should be plain for all to see.

The Supreme Court Justices are garbed in their splendid ermine robes. The formulators of corrupt editorial policy are arrayed in their impeccable suits. The political rabble—magistrates and courtiers—occupying the seats of power and intent on deceiving the public are covered head to toe in glittering bling. Their flunkies, cupbearers, sycophants, liegemen, retainers, stewards, equerries, advocates, and advisors parade in custom-made attire. And nearly half the American public are blinded by the spurious radiance of their leaders and opinion-makers—or appear to be, either taking falsehood on faith or colluding in the imposture. Indeed, the vestiary pageant that the Left has mounted is as impressive as it is specious. The only problem is that they are all displayed, for those whose eyes are open and who are clear of mind, in their jockeys and knickers. Some cavort stark naked. The dazzling robes and gowns are mere illusions, tricks of sham effulgence.

There is, mind you, a mercer’s wrinkle to consider. Many of these pretenders surely believe they are garbed in executive fabric but others are perfectly content to swan about in their undies. One thinks of all the mask-and-lockdown types who openly defy their own commandments and admonitions and arrogate privileges to themselves forbidden to their citizen wards, whether it be White House coronavirus response coordinator Deborah Birx flying to her Delaware island, or California governor Gavin Newsom partying maskless and at close quarters with his cronies, or Illinois governor J.B. Pritzker’s family traveling to their horse farm in another state, or Obama & wife flying to Hawaii and enjoying a kayaking holiday. They—and innumerable others—add another dimension to Andersen’s tale. On further reflection, perhaps it amounts to the same thing. Some hide behind their imagined glitz, others do not even scruple to cloak their naked indifference and disdain. All hold the people in contempt.

Meanwhile, the weavers of tales, sometimes known as journalists, panelists, talking heads, cable anchors, and social media moguls, continue to profit from the tissue of lies they fabricate and circulate in the hope of deceiving the multitudes and creating a new emporium of tenuous webs and textures called a “presidency.”

The only issue that remains to be addressed is whether the nominal Emperor, who fancies himself president-elect, is aware that he is strutting about in his smalls, or whether he really believes that he is accoutered in finery “of the most beautiful colors and patterns.” I suppose it depends on the day.

The “little child” in us, the moral and intelligent portion of the soul, knows that we have been purposefully gulled and cheated, grossly victimized. It is moot, however, whether the clarity of perception and moral indignation of the targets of the great charade can persuade the authorities—justices, legislators—to live up to their assumed garments and dethrone the putative Emperor, sending him back to his appropriate tailor on the shady side of town. For the Emperor who has no clothes and trundles about in his boxers has no business assuming the airs of royalty, any more than the ministers, lords, and chamberlains of the state have the right to desecrate the trappings and vestments of their office by pretending to wear them.

David Solway’s most recent book Notes from a Derelict Culture was delisted by Amazon. It is currently available at Barnes & Noble.