Trump's minority outreach laid groundwork for expansion of base: 'It scares the heck' out of Dems

By David Sherfinski |The Washington Times 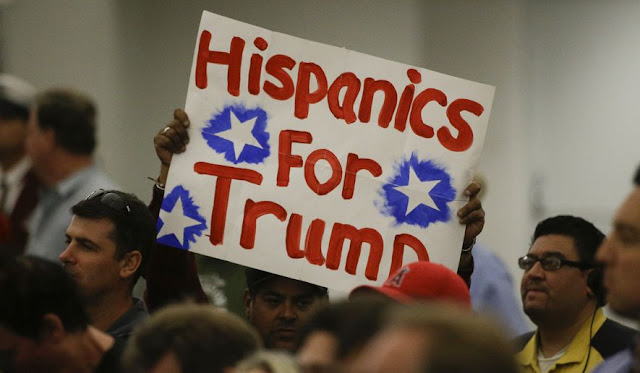 A Hispanic supporter holds up a sign for Trump during a rally. (AP File Photo/Jae C. Hong)

A wounded Democratic Party is terrified that President Trump has laid the groundwork for an expansion of the Republican base in the 2020s, said a veteran pollster.

Despite his apparent loss on Nov. 3, Mr. Trump made significant inroads with Hispanic and Black voters. The GOP also managed to stave off disaster by holding on to several vulnerable Senate seats and picking up seats in the House.

“The expansion of the base is a really, really big story and I think it shows real inroads and I think it scares the heck out of the Democratic Party,” said Jim McLaughlin, a veteran Republican pollster who did work for the Trump campaign.

But Mr. McLaughlin said the president’s support among Hispanics is broader than that.

“He got a lot of non-Cuban Hispanics because he talked to them, he went down there, he made them a priority,” he said.

Exit polls show Mr. Trump won an estimated 32% of the Hispanic vote, which is the largest share for a GOP presidential nominee since 2004.

Mr. McLaughlin said he would hear over and over again from Florida focus groups that Mr. Biden and the Democrats sounded like communist and socialist dictators such as Fidel Castro of Cuba, Nicolas Maduro of Venezuela and Hugo Chavez, the late leader of Venezuela.

“They would tell you that, and that wasn’t like a once-in-a-while. It was every single time,” he said. “They hated the socialism thing — it was a big deal.”

Hispanic immigrants come to the U.S. for a better quality of life and want to work hard and take care of their families, he said.

“They really got turned off by the riots and the looting and the protests and whatnot and they would literally tell you, this is what we left to come here,” Mr. McLaughlin said. “We saw that. It wasn’t like hey, surprise, look what happened on Election Day.”

Exit polling also showed that Mr. Trump won 12% of Black voters, up from 8% four years ago.

“It’s not as much about their race,” Mr. McLaughlin said. “They live in the suburbs or they live in suburban or wealthier, more affluent urban areas. They’re more middle- to upper-middle income African Americans and Hispanics.”

He said the president’s support among minority voters often is small business owners or middle-to-upper management.

Mr. McLaughlin said that both in this year’s race and in 2016, people tended to side with Mr. Trump on the issues over Mr. Biden or 2016 Democratic presidential nominee Hillary Clinton regardless of who they thought won the presidential debates.

“On things like education and school choice, on keeping people safe, stopping the rioting and the looting, trade issues, creating jobs and the economy, wanting lower taxes post-COVID — the voters agree with the Republicans here,” he said.

Mr. Trump hit his high water mark in surveys on the economy.

Democrats are in a unique position in that they appear to have clinched the presidency but fell well below expectations in several high-profile Senate races. They also will enter next year with a much thinner majority in the House.

Republicans will maintain control of the Senate unless Democrats can sweep two runoff contests on Jan. 5 in Georgia, which until Mr. Biden’s narrow win had been reliably red for decades.

David Winston, a longtime Republican consultant and pollster, said 2020 appears to have ended in a “bizarre outcome.”