The Political Making of a Texas Power Outage 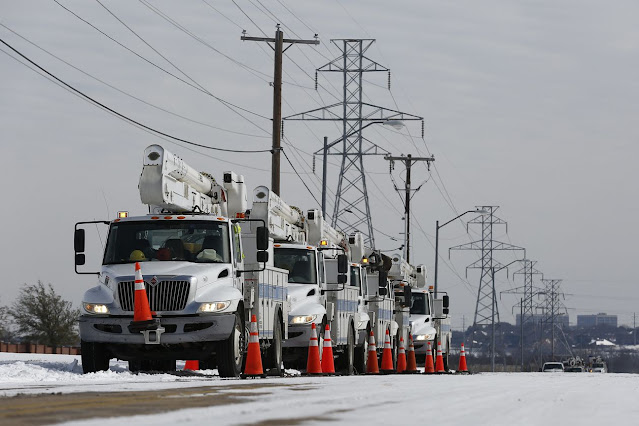 Electric Utility trucks are parked in front of the Oncor facility in preparation of power outages due to weather, Fort Worth, Texas, Feb. 16. - PHOTO: RALPH LAUER/EPA/SHUTTERSTOCK

Why are millions of Americans in the nation’s most energy-rich state without power and heat for days amid extreme winter weather? “The people who have fallen short with regard to the power are the private power generation companies,” Texas Gov. Greg Abbott explained. Ah, yes, blame private power companies . . . that are regulated by government.

The Republican sounds like California’s Democratic Governor Gavin Newsom, who lambasted private utilities for rolling blackouts during a heat wave last summer. Power grids should be able to withstand extreme weather. But in both these bellwether states, state and federal energy policies have created market distortions and reduced grid reliability.

Mr. Abbott blamed his state’s extensive power outages on generators freezing early Monday morning, noting “this includes the natural gas & coal generators.” But frigid temperatures and icy conditions have descended on most of the country. Why couldn’t Texas handle them while other states did?

The problem is Texas’s overreliance on wind power that has left the grid more vulnerable to bad weather. Half of wind turbines froze last week, causing wind’s share of electricity to plunge to 8% from 42%. Power prices in the wholesale market spiked, and grid regulators on Friday warned of rolling blackouts. Natural gas and coal generators ramped up to cover the supply gap but couldn’t meet the surging demand for electricity—which half of households rely on for heating—even as many families powered up their gas furnaces. Then some gas wells and pipelines froze.

But politicians don’t care about grid reliability until the power goes out. And for three decades politicians from both parties have pushed subsidies for renewables that have made the grid less stable.

Start with the 1992 Energy Policy Act signed by George H.W. Bush, which created a production tax credit to boost the infant wind industry. Generators collect up to $25 per megawatt hour of power they produce regardless of market demand. The credit was supposed to expire in 1999, but nothing lasts longer than a temporary government program, as Ronald Reagan once quipped.

The renewables lobby found GOP allies in windy states like Texas, Oklahoma and Iowa. Former Enron CEO Ken Lay, who had made a big bet on wind, begged then Texas Gov. George W. Bush in 1998 to lobby Congress to extend the credit for five years. Congress has since extended it more than a dozen times, most recently in December.

Wind producers persuaded former Gov. Rick Perry to back a $5 billion network of transmission lines to connect turbines in western Texas to cities. This enabled them to build more turbines—and collect more tax credits. Because the Texas grid is often oversupplied, wind producers sometimes pay to off-load their power, though they still turn a profit with the tax credits.

Coal and nuclear are more strictly regulated and can’t compete, and many coal plants have shut down in Texas and elsewhere. Over the last decade about 100 gigawatts of coal power nationwide has been retired—enough to power 60 million homes. Many nuclear plants are scheduled to shut down, including large reactors in New York and Illinois this year.

Renewables and natural gas are expected to substitute, but Texas is showing their limitations. In the Lone Star State, bad weather has constrained the supply of gas, but government policies do the same in other states. New York Gov. Andrew Cuomo and New Jersey’s Phil Murphy have blocked pipelines to deliver shale gas from Pennsylvania to the Northeast.

Their pipeline blockade has driven up the cost of electricity. The average retail price of power is about 50% higher in New Jersey and New York than in Pennsylvania. They and other governors have also poured subsidies into wind and solar, though neither can provide reliable power in frosty weather.

Many states also have renewable mandates that will force more fossil-fuel generators to shut down. New York has required that renewables account for 70% of state power by 2030. Then layer on Democratic policies at the federal level that limit fossil-fuel production and distribution.

The Federal Energy Regulatory Commission is supposed to ensure grid reliability, but under Barack Obama it promoted renewables over reliability. Democrats opposed efforts by Trump appointees to mitigate market distortions caused by state renewable subsidies and mandates that jeopardized the grid. On present trend, this week’s Texas fiasco is coming soon to a cold winter or hot summer near you. 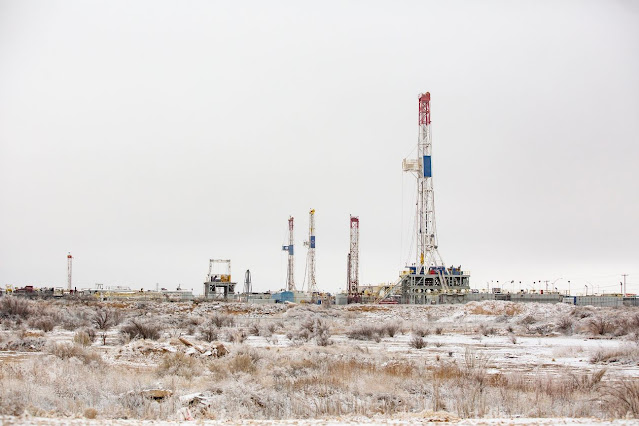 Gas and power prices have spiked across the central U.S. while Texas regulators ordered rolling blackouts Monday as an Arctic blast has frozen wind turbines. Herein is the paradox of the left’s climate agenda: The less we use fossil fuels, the more we need them.

A mix of ice and snow swept across the country this weekend as temperatures plunged below zero in the upper Midwest and into the teens in Houston. Cold snaps happen—the U.S. also experienced a Polar Vortex in 2019—as do heat waves. Yet the power grid is becoming less reliable due to growing reliance on wind and solar, which can’t provide power 24 hours a day, seven days a week.

While Texas is normally awash in gas and oil, the Electric Reliability Council of Texas, which oversees the state’s wholesale power market, urged residents this weekend to conserve power to avoid power outages. Regulators rationed gas for commercial and industrial uses to ensure fuel for power plants and household heating.

Texas’s energy emergency could last all week as the weather is forecast to remain frigid. “My understanding is, the wind turbines are all frozen,” Public Utility Commission Chairman DeAnn Walker said Friday. “We are working already to try and ensure we have enough power but it’s taken a lot of coordination.”

Blame a perfect storm of bad government policies, timing and weather. Coal and nuclear are the most reliable sources of power. But competition from heavily subsidized wind power and inexpensive natural gas, combined with stricter emissions regulation, has caused coal’s share of Texas’s electricity to plunge by more than half in a decade to 18%.

Wind’s share has tripled to about 25% since 2010 and accounted for 42% of power last week before the freeze set in. About half of Texans rely on electric pumps for heating, which liberals want to mandate everywhere. But the pumps use a lot of power in frigid weather. So while wind turbines were freezing, demand for power was surging.

Gas-fired power plants ramped up, but the Arctic freeze increased demand for gas across the country. Producers couldn’t easily increase supply since a third of rigs across the country were taken out of production during the pandemic amid lower energy demand. Some gas wells and pipelines in Texas and Oklahoma also shut down in frosty conditions.

Enormous new demand coupled with constrained supply caused natural gas spot prices to spike to nearly $600 per million British thermal units in the central U.S. from about $3 a couple weeks ago. Future wholesale power prices in Texas for early this week soared to $9,000 per megawatt hour from a seasonal average of $25.

Prices jumped in the Midwest too, though less dramatically because there are more coal and nuclear plants. Illinois and Michigan have more gas storage than Texas, which exports much of its shale gas to other states and, increasingly, around the world in liquefied form.

Europe and Asia are also importing more fossil fuels for heat and power this winter. U.S. LNG exports increased 25% year-over-year in December while prices tripled in northern Asian spot markets and doubled in Europe. Germany’s public broadcasting recently reported that “Germany’s green energies strained by winter.” The report noted that power is “currently coming mainly from coal, and the power plants in Lausitz” are now “running at full capacity.”

Coal still accounts for 60% of China’s energy, and imports tripled in December. China has some 250 gigawatts of coal-fired plants under development, enough to power all of Germany. Unlike Democrats in the U.S., Chinese leaders understand that fossil fuels are needed to support intermittent renewables. “Power shortages and incredibly high spot gas prices this winter are reminding governments, businesses and consumers of the importance of coal,” a Wood Mackenzie consultant told Reuters recently.

Liberals claim that prices of renewables and fossil fuels are now comparable, which may be true due to subsidies, but they are no free lunch, as this week’s energy emergency shows. The Biden Administration’s plan to banish fossil fuels is a greater existential threat to Americans than climate change.